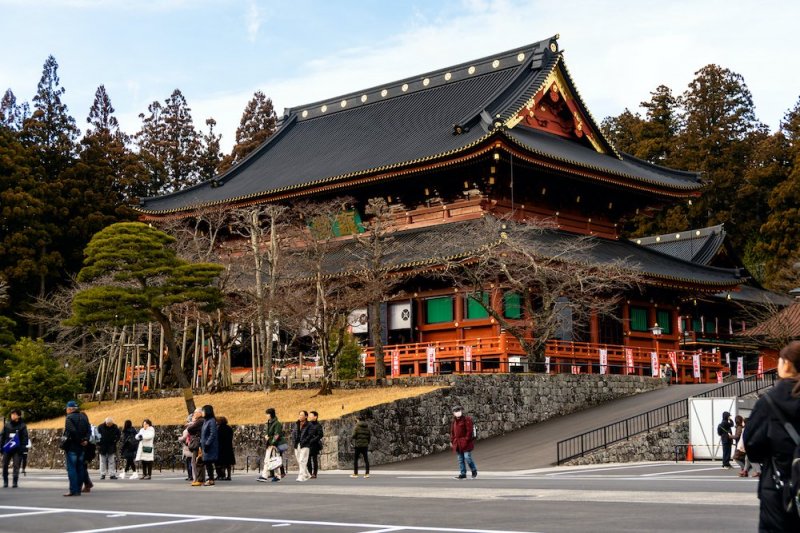 Among Nikko’s many world-renowned temples, stands the vibrantly colored Rinnoji (輪王寺), which was designated as a UNESCO World Heritage Site in 1999. Shodo Shonin, a Buddhist monk credited for introducing Buddhism to Nikko, founded the temple in the eight century. Lush forests and the mountainous landscapes of Mount Nantai, Nyoho, and Taro surround the collection of buildings, creating an atmosphere of sacred solitude. Many notable Buddhist figures were drawn to the temple’s pious isolation, including Kukai, the founder of the Shingon School of Buddhism, and Enjin, a priest of the Tendai School of Buddhism.

Rinnoji’s main building, Sanbutsu-do, is a visual marvel with a red exterior, blue-and-green detailing, and traditional design, and is one of the largest wooden structures in Nikko. Inside Sanbutsu-do are three Buddha statues: Amida (Limitless Life/Light), Senju-Kannon (Kannon with a thousand arms), and Bato-Kannon (Kannon with a horse head), which represent mounts Nyoho, Nantai, and Taro respectively—Nikko’s three holy mountains. These gold-lacquered statues stand eight meters tall and are expertly crafted with poised and serene expressions, reminding visitors of the area’s deep respect for the mountains.

Standing just outside Sanbutsu-do is a 13-meter tall bronze pillar, which contains thousands of Buddhist sutras to protect the temple. The pillar was built in 1643 at Shogun Tokugawa Iyemitsu’s request.

Near Sanbutsu-do is Homotsu-den, or the treasure house, which displays Buddhist and Tokugawa family artifacts. Visitors can observe numerous pieces of art, such as paintings, sculptures, and scrolls.

Behind Homotsu-den, is the stunning Japanese-style garden, Shoyo-en. The overhanging trees, soft green tones, and pond create a mesmerizing scene of tranquility. Stone lanterns decorate the garden in appropriate Edo-period style. On windless days, the water’s stillness provides a reflection of the peaceful scenery. Shoyo-en is especially popular in autumn when the area’s Japanese maple trees turn vibrant red. During this time, the temple illuminates the bright foliage, giving visitors opportunities to experience the garden in the darker tones of the evening and night.

Every year on April 2nd, individuals participate in a unique ceremony, called Gohanshiki, which solely takes place at Rinnoji. Also called the Ceremony of Forced Rice Eating, participants are forced to eat large bowls of rice. In return, Buddha will remove the Seven Major Misfortunes from the participants’ and onlookers' lives and bless them with the Seven Major Fortunes. This ceremony dates back to the Edo period, where famous feudal lords would perform the same actions in hopes of Buddha’s blessings.

Rinnoji is located about half way between Nikko's Shinkyo Bridge and Toshogu Shrine. It's a 10 min bus ride or 30-40 min walk from Nikko Station (buses are included in the Nikko Pass).

Traditional Japanese ryokan and its facilities and the walk along the main street of Nikko Town.

There is an excellent restaurant specializing in eel in Nikko called Sawamoto. In fact, their broiled eel is the best I have ever had.

The Nikko Toshogu Shrine is arguably one of the most important religious sites in Japan and is located in the forests of Tochigi Prefecture. The shrine is the final resting place of Tokugawa Ieyasu, the samurai leader who united Japan in the early 1600s and the first ruler of the Tokugawa shogunate of the same name, which ruled Japan for over 250 years until 1868. Originally a relatively simple mausoleum, Toshogu was expanded in the first half of the 16th century by Ieyasu's grandson Iemitsu to create the spectacular complex that can be visited today. The shrine complex consists of more than a dozen buildings, which have been refined with countless wood carvings and large amounts of gold leaf. This is very unusual as there is usually an emphasis on simplicity in shrine architecture. Toshogu contains both Shinto and Buddhist elements. The wood carving of the monkeys who see no evil, speak no evil, and hear no evil is best known.

The Kegon Falls are located on Lake Chuzenji in Nikko National Park in Tochigi Prefecture. The 97-meter-high falls are one of Japan's top three waterfalls and are also considered one of the top eight viewpoints in Japan from the Showa period. Overall, they exist 12 waterfalls, all located under or parallel to a large waterfall, the other two famous waterfalls are Nachi Waterfall in Wakayama Prefecture and Fukuroda Waterfall in Ibaraki Prefecture. They are especially popular during the fall foliage season when visitors travel to Nikko to admire the golden-orange colors. You can use an elevator there to see everything up close. In winter, the waterfalls even freeze over completely.