On Route 197 heading south from Ozu is a big red torii gate on the right marking the entrance to a narrow valley. If you follow the road up through the torii, past buildings from early last century, you come to another smaller torii at the start of a mossy and verdant gorge with seven waterfalls and bridges. This is Oyabu Gorge. At the top end of the gorge stands the Oyabu Onsen ryokan, a picturesque building of great charm and atmosphere.

Although Oyabu Onsen is a full-service ryokan, visitors are welcome to use the baths for 500 yen. You make your way down a steep flight of wooden steps, through a corridor, and along an open colonnade to the separate bath house. The changing room is small and sufficiently intimate that it would seem impolite not to greet any other bathers in there. I always experience a thrill of anticipation before I open the final door to an onsen, and the bath at Oyabu met all my expectations.

I last went on a cold, rainy morning in January when the forested hills emerged from layers of mist. As I soaked in the blissfully warm water, I watched the raindrops agitating the leaves of the shrubs in the garden, visible through the large windows on two sides. Beyond the garden, I could see the river with a little weir and beyond that, steep mountains clothed in bamboo and fir trees. The sound of the river gushing over the weir was echoed by the splashing of the hot water pouring from the stone feature in one corner of the bath.

The bath itself is one of the nicest I’ve been in. Tiled in dark stone, it has a sill of beautifully textured wood, with water-worn knots. It’s slippery to the touch from the minerals in the water. Bathers like to lean their heads on something as they enter their onsen trance, and a smooth sill of wood is just the thing. The mineral deposits, like proto-stalagmites on the tiles, attest to the virtues of the water.

The hot spring at Oyabu was discovered in 1876 during the Meiji period, and the current building dates from the Taisho period, which corresponds to the first quarter of last century. In the warm seasons, you can have a drink or simply sit in the lounge area upstairs with its balustraded balconies, tatami mats and sliding screens which are opened to provide a view of the riot of green outside. 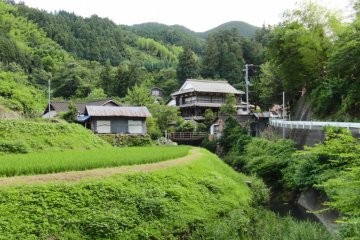 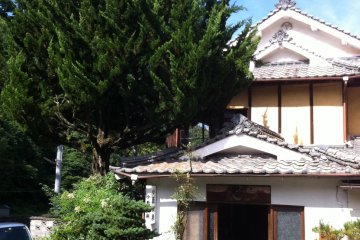 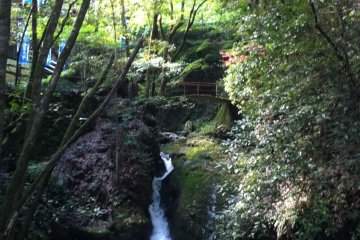 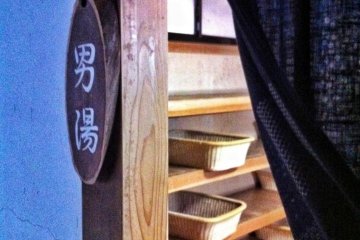 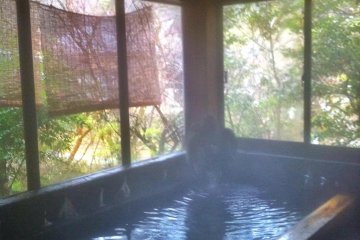 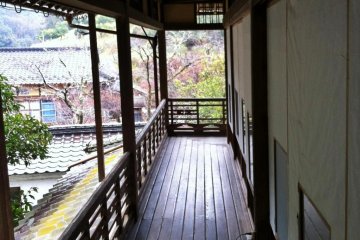 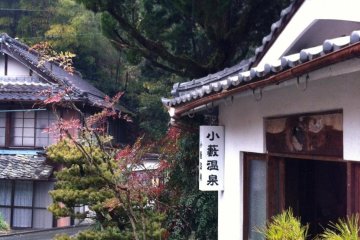