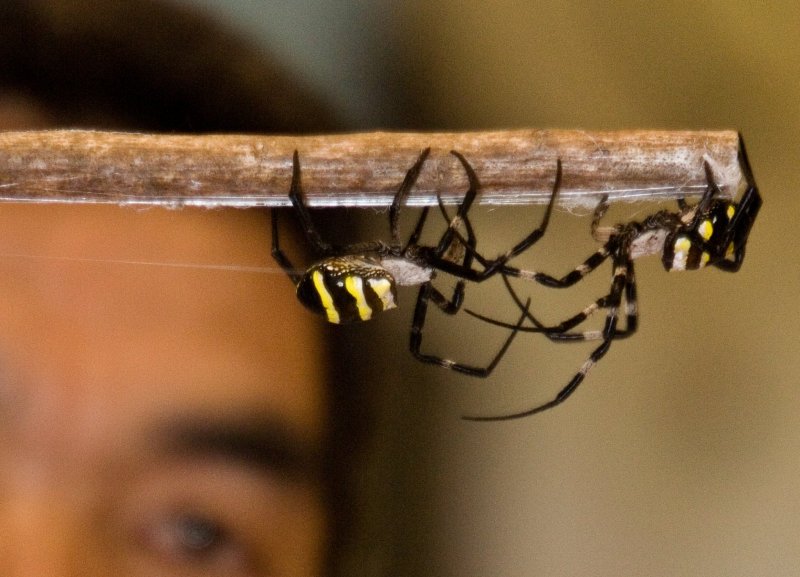 Kajiki's Spider Fighting Festival, or Kumo Gassen, is a spider-fighting event that takes place in Kagoshima's Aira city, in a tradition that dates back over 400 years. With arachnophobia, the fear of spiders, being commonly ranked as one of the biggest phobias of all the time—alongside public speaking and enclosed spaces—Kajiki-cho is perhaps likely going to be the last place on Earth that arachnophobic Japanophiles will consider visiting. But perhaps the locals also hold the secret with dealing with such phobia?

‘So, do they just throw some spiders in a box and make them fight to the death?’ my sister asked as I researched the town I would be living in for the next two years, obviously seeing the word “battles” and, like me, fancifully thinking of a war-like scene in which tiny armies race at each other. ‘That’s kind of sick, isn’t it?’

‘I think that there is a little more to it than that,’ I replied, a touch hopefully.

Thankfully, there was and is.

The spiders, Argiope amoena, are large, purple and yellow, and look capable of scaring any muffet off her tuffet. The contenders are raised and trained in the homes of the owners, and are affectionately known as Samurai Spiders. Some sources indicate that they are free to roam around the owners’ dwellings, although I never met a family who allowed this, even if the children and adults alike were very fond of their pets. Fighting two at a time in a round robin style tournament, the last spider standing is the winner.

‘But they don’t kill each other, do they?’ I asked my friend, Takuro, who was helping moderate the event, two springs after my initial research (the event had been cancelled my first year, over fear of the spread of swine flu).

He was thoughtful. ‘No,’ he decided at last. ‘They bite, but the referee stops them before they hurt each other.’

There were many of these sharp-eyed refs sitting around the crowded gymnasium. Raised on small platforms with long sticks held horizontally before them, they watched the tiny and rapid fights closely and judge who bit first (the first method of winning), who wrapped who in a web (second), or, when both have dropped down on threads to fight, who snipped who’s line (third). Some fights are easier to call than others. If the spiders get too aggressive, or if, conversely, they are just not that into fighting, the referees use their hands to either separate, or coax the spiders into action. The separating especially looked downright fool-hardy when first witnessed; the amount of money needed to persuade me to stick my hand between two, large, fighting spiders would have to be very large indeed. As far as I could tell all of the referees were acting on a volunteer basis, and looked no more concerned than men handling caterpillars.

But the refs were almost nothing compared to the owners, about half of them children, and how fearlessly they handled their spiders, lovingly even. One group of eager boys demonstrated how harmless the spiders were by taking them out and allowing the creatures to walk up their arms, over their necks, onto their faces, and even right up over their eyes onto their heads. Needless to say, my friends and I were impressed.

‘So you like spiders?’ I asked one boy with a spider on his face in my halting Japanese. He nodded avidly.

‘Oh, yes! I love them!’ He offered his pet for me to hold. I declined, but my friend accepted.

At the end of the day we left satisfied, and for my part with a new-found appreciation for the little creatures, certainly not the feeling I was expecting to get from a fighting venue. But really, how often do things in Japan turn out exactly as you expected?

The Spider Fighting Festival is held on every 3rd Sunday of June.

The Kajiki Welfare Centre is a 10 minute walk west of Kajiki station.