When I first came to Japan I was looking for the same thing every girl living in Japan for the first time is on the hunt for: delicious sushi. TV and the media would lead you to believe that there is sushi popping out of every nook and cranny in Japan, that there is not much you can do to prevent the overwhelming amounts of tuna, rice and nori from falling into your open mouth. However, this is not the case.

In fact, until I moved to Saga, I hadn’t even had the chance to try real Japanese sushi. It was a treat I was yet to uncover. I had at some point managed to grab some sushi from a konbini along the way, but this wasn’t quite the luxury cuisine I was looking for.

So when an ALT who works in the same town as me asked me if I wanted to come to my first “kuru kuru” conveyor belt sushi experience, I almost bit her hand off at the opportunity. Great sushi was half the reason I wanted to come to Japan in the first place (well almost).

At the time, knowing little about Saga, I took the bus, which cost ¥150. Later I found out it is only a 25 minute walk from the station and ever since I’ve always walked (or taken my bike). It’s easily accessible as it is near Youme Town, a large shopping mall in the city.

Firstly, make sure you take note of the colour of your table, as shown on the map on your card. Then you can take your pick from the sushi passing by you on the conveyor belt, or you can order by browsing the pictures on the touch screen. If you press the green button next to the picture you can order without wasabi. Orange plates mean with wasabi, white without, and extra wasabi can be picked up from the carousel.

There is a huge range of sushi on offer, from meatball to prawn, avocado to onion, and will barely resembles anything you are likely to have seen back home. The sushi is Japan is simply superior, and there is a such an enormous variety.

Vegetarians also have choices, from roasted aubergine nigiri, to cucumber maki. Sushiro also offers udon soups and tempura, some of which are also vegetarian (I recommend the pumpkin tempura yum)

There are also desserts, ice cream and cakes which can also be ordered from the touch screen. When you are finished, press the button at the side of the screen and a waitress will come and update your card so you can pay at the till. If you say “betsu betsu” she will give each person a separate card and you can pay for what you ordered individually.

The best thing about Sushiro is that the vast majority of things on offer are just ¥105, making it one of the cheapest options for eating out. If you come to Saga, come to Sushiro and I’ll see you there. 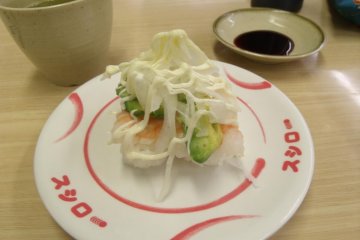 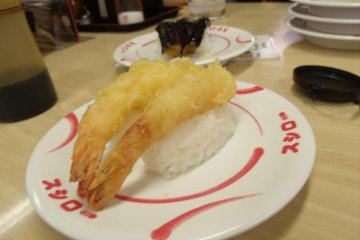 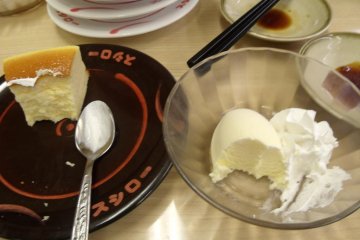 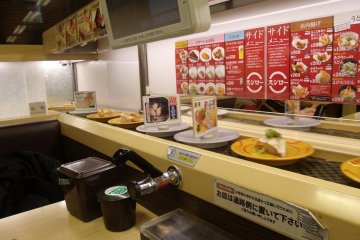 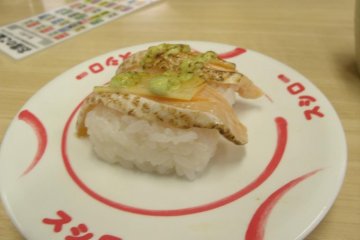