Soba (そば) shops are ubiquitous in Japan. These thin noodles made of buckwheat flour (in contrast to thick wheat flour noodles called udon) can be eaten cold with a dipping sauce or hot in a broth. Found in a lot of train stations, sometimes right on the platform or just upon exiting, these shops dish up one of Japan's favorite comfort foods and patrons can enjoy them sitting or standing up. Dried soba and bottled dipping sauce make home preparation of soba convenient. At the same time, soba is not to be snubbed as a cheap fast food because it is also served in expensive specialty restaurants. Soba is the traditional noodle of choice of Tokyoites.

In the Edo Period, beriberi, a disease characterized by inflammation of the nerves and heart failure caused by the deficiency of Vitamin B, was widespread among the wealthier population due to their high consumption of white rice. It was discovered that beriberi can be prevented by consumming thiamine-rich soba.

There is good reason to tout the nutritional merits of soba. Aside from thiamine, soba contains antioxidants, essential nutrients, and all eight essential amino acids, including lysine which is absent in wheat flour. Soba's polysaccharide is easily digested.

Soba enthusiasts, though, would swear by the noodles made from newly harvested buckwheat flour, called "shin-soba", which they claim is sweeter and more flavorful than regular soba. Last November 20, 2016, we trekked all the way to Chichibu to the 23rd Chichibu Arakawa Shinsoba Matsuri to find out for ourselves.

The festival runs from 10 a.m. to 3 p.m. We made our way to Chichibu Station along the Seibu Chichibu Line. From the station, there were free shuttle buses to take people to the out of the way soba field where the festival was held.

The event venue consisted of the various stalls of soba makers lining the perimeter of the now empty soba field. While all the stalls sold soba, some offered tempura with theirs while others offered duck. Lines were particularly long from 11 a.m. to 1 p.m. but they moved fast. We ordered a soba and tempura set for ¥600 (¥500 for the soba and ¥100 for the tempura). Our chilled soba was served on a sieve-like bamboo tray called zaru. I honestly am not a soba fan and prefer udon most days but this is, by far, the best soba I have ever had in my life. The noodles were uneven, evidence that they were hand cut. They were perfectly al dente and, as attested by soba enthusiasts, sweeter and more flavorful than regular soba. My 3-year old son polished off an entire soba set all by himself.

After enjoying our soba surrounded by the Chichibu Mountains and the fall colors, we browsed the stalls of the flea market and enjoyed Peruvian music at the stage event.

Would I go back again next year? For a taste of shin-soba, most definitely. 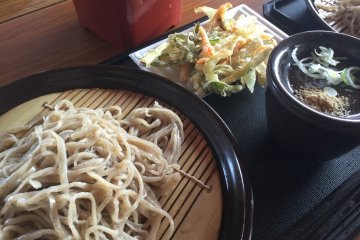 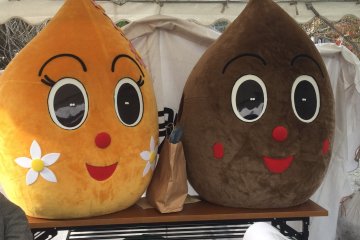 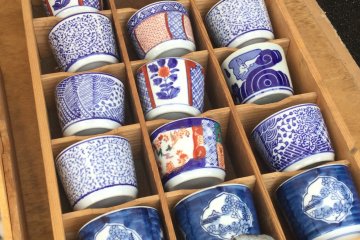 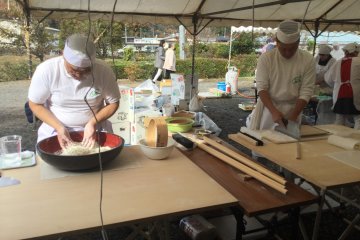 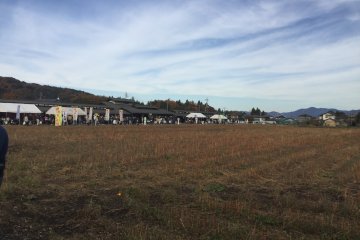 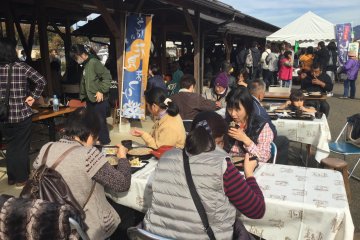 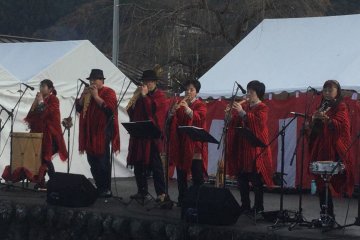 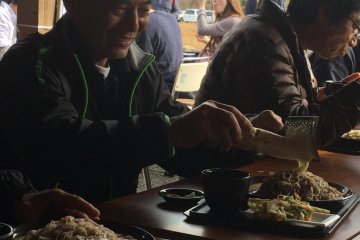 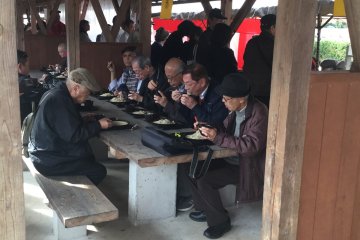