One of the most beautiful Starbucks in Japan

One of Japan's most beautiful Starbucks is located on Kanetsuki Street in Kawagoe. Kane means “bell”, Kanetsuki means “with bell”. The Starbucks on the street with the bell! The bell tower in Kawagoe is a symbol of the city and the Starbucks is only a few doors down from the famous landmark. Moreover, the branch was designed to match the Edo period architecture the tourist area of the city is famed for. Many people may judge it on the beauty of the exterior alone, but it is much more than that. It is the whole package – the eclectic mix of new and old, of light and dark, of stone and wood. Combined with the aesthetics of the interior, the Zen garden, the outdoor alley, and the tale of the repurposed materials to me makes it one of the most beautiful Starbucks in the world.

The back rest on the cushions in the cafe were made from Kawagoe Tozan or Kawatou – the Kawagoe-made fabric that was in high demand until around 1900. The background of Tozan is pretty fascinating actually. Briefly: the name is said to be derived from the port of St. Thomas on the eastern coast of India! Cotton fabric was imported from there from around the 1500s during the Muromachi period. Tozan – tou for the sound of Thomas and zan as in to be made – came to mean fabric imported from abroad! Ametou meant cotton from America. And Kawatou came to equate fabric made in Kawagoe. Kawatou materials were originally imported from England.

Furthermore, the pictures in the cafe are framed with fusuma, a type of Japanese interior sliding door, from the Taisho Period. In addition, the base of the counter was designed to look like the walls of the old warehouses. There are surely more stories behind the design of the branch, but these are the only ones I am aware of so far.

Starbucks Kanetsuki Street is my personal favorite branch of Starbucks anywhere in the world. There are others in Japan that are famed for being equally (some would say more) beautiful than Kanetsuki Street. The one in Kyoto is often mentioned. Moreover, there is a store-design award winning Starbucks in Toyama Prefecture that has been given the coveted title of the world’s most beautiful Starbucks in the past. You can find information for ten of Japan's unique Starbucks here on JapanTravel.

The Kanetsuki Branch of Starbucks is a few doors up from the Bell Tower. As such, any tourist or Tobu bus going to the tourist district will bring you close enough. If you alight at the Ichibangai bus stop and cross the road at the nearest pedestrian crossing with traffic lights, it brings you to the Kanetsuki street. The Starbucks is past the Bell Tower as you head East.

There is no parking at this branch and there is no free public parking nearby. But there are dozens of coin parking lots. I use Rakuda Plaza by Penny Candy Alley. Its only about a ten minute walk away. Moreover, I find it one of the better value ones and it is picturesque too with its own old “kura” stone warehouse. There is actually a nearer Rakuda Plaza in Otemachi, about a three minute walk, but it only has a few spaces. The one by Penny Candy Alley has about three times as many. The nearest free parking is at the crossroads of Honmaru Goten on route 16 in front of the farmer's market. 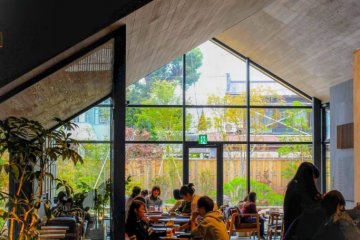 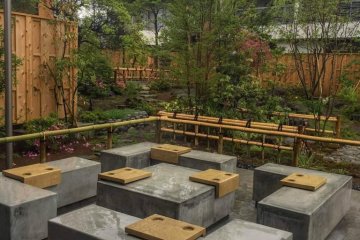 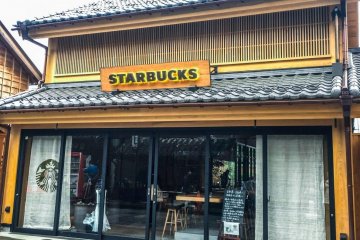