If you ask me what there is to see in Shiga Prefecture, one of the easternmost Kansai prefectures, I might be hard pressed to come up with much. This is because each and every time I go to Shiga, I have a particular destination in mind - my favourite temple, Ishiyama-dera.

With Kyoto so close - less than fifteen minutes' travel on the JR Biwako Line - it might come as a surprise that anyone would travel a long distance to visit a shrine in Otsu. Yet Ishiyama-dera held a strange allure for me from the first time I saw it. Nestled in the hills about half an hour's walk from JR Ishiyama (or switch to the Keihan Line and take it right to the shrine's own tiny station), it boasts a fair amount of traffic, but is almost never crowded. Steep steps lead up to the pagodas and most of the other sights; enough to make even lovers of heights take their time making it back down.

The Main Hall is the oldest building in Shiga Prefecture. My favourite feature, however, is the Genji Room - it is said that Murasaki Shikibu, author of The Tale of Genji, began writing her famous work here; said to be the first novel ever written. A life-sized Murasaki figure sits in the room. While her work didn't resonate as strongly with me as it has with other fans of Japanese literature, it was still an experience to visit the Genji room and imagine that I was in the very place where the novel was conceived. From that moment, Ishiyama-dera became my go-to place whenever I was seeking inspiration, quiet, or even just a way to pass the afternoon.

The tail end of winter or the beginning of spring is a great time to see this temple. While many temples have cherry trees on their grounds, this one among them, Ishiyama-dera also boasts a beautiful grove of plum trees - it is called the "temple of flowers" by locals. Large groves of plum trees are a taller order in Japan than cherry trees, so if you visit Ishiyama-dera in February, you may be lucky enough to catch their 400 plum trees in bloom. In autumn, Japanese maples line the grounds. This temple is also on the Kansai Kannon Pilgrimage list; pilgrims making their way through the Buddhist temples in Kansai will visit Ishiyama as their thirteenth stop.

The grounds open and close quite early, so be sure to give yourself plenty of time to stroll the paths and sit under the trees. Unfortunately, with the early closing time, visitors cannot take advantage of the moon-viewing platform that supposedly inspired Murasaki a thousand years ago, but it's still a nice daylight view, with Lake Biwako visible just below the hills. A favourite memory is sitting on those bluffs on a rainy but mild February afternoon, the water droplets making the trees hang heavy, and not another soul around to disturb my thoughts. If you're looking for a change from the crowded Kyoto temples, Ishiyama-dera is a welcome breath of relief. 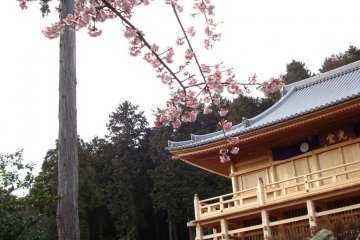 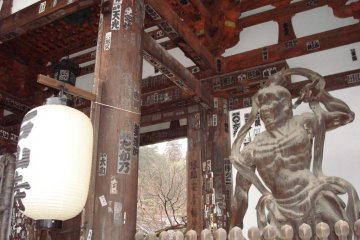 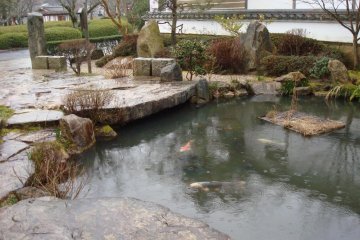 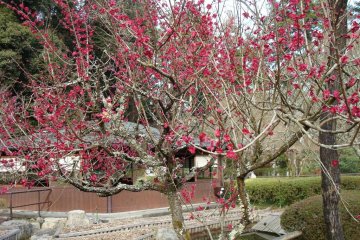 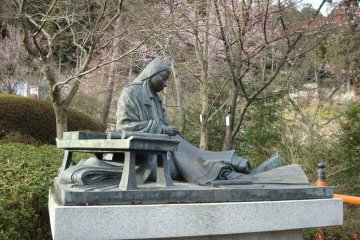 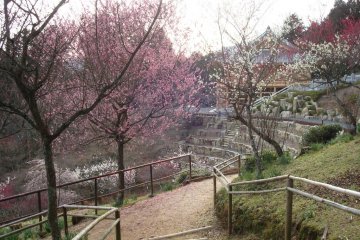 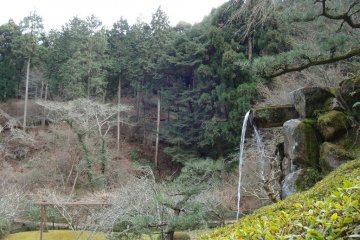 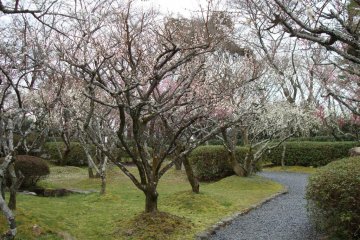 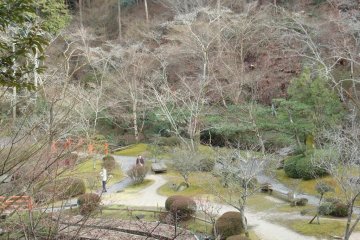 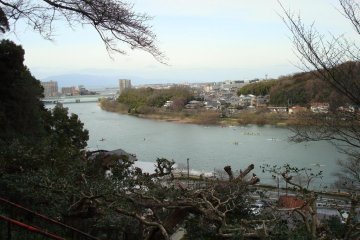