Located over the Oh-i River near Shimada

Horai-bashi Bridge, which spans the Oh-i River that runs through Shimada in Shizuoka Prefecture, was certified as the world's longest wooden pedestrian bridge by the Guinness Book of Records on December 30th, 1997. This wooden bridge was originally constructed in 1879, and as its piers had been damaged so often by the increased water and rapid flow from rain that it was changed from wood to concrete in 1965. It is 897.4 meters long and 2.4 meters wide. Only pedestrians and bicycles are allowed to cross, costing 100 yen (for above 12 years old or on a bicycle) or 10 yen (for under 12).

Until the end of the Tokugawa government in the middle of the nineteenth century, Japanese local sovereign lords had been reluctant to construct bridges because rivers, especially large ones, often played a role in the defense against attacks from outside. The Oh-i River, starting at the steep 3189m Mt. Ainodake in the northern area of the Southern Alps in Shizuoka Prefecture, had been famous for its rapid flow especially after rains until finally dams were constructed later. As there had been no bridges on the river, travelers often had to wait for several days until the depth of the water was safe enough to walk across. There’s a well-known poem that reads ‘Even though horses can go over the Hakone Pass, they can barely go across the Oh-i River’. Small boats were available but they were unstable, and people were carried over on floats held by four to six porters. There were 350 porters stationed on each side of the river.

After the Meiji Restoration in 1868, all the clans were abolished and permission was given to build bridges by the governor of Shizuoka Prefecture. Samurai lost their living and settled down around the river. They began to grow tea, and requested the mayor of Shizuoka Prefecture to build a bridge over the Oh-ii River for the convenience of safe transportation and for the carrying general merchandise. The bridge was completed on January 13, 1879, and was named Horai-bashi after a legendary wizard who was said to be capable of performing miracles to make the world happy. Beautiful Mt. Fuji can be observed from the middle of the bridge and it has become one of many prominent sightseeing spots in Shizuoka Prefecture. 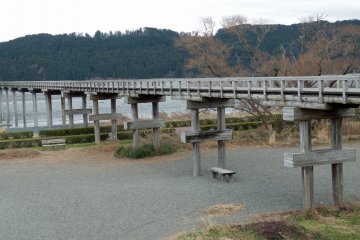 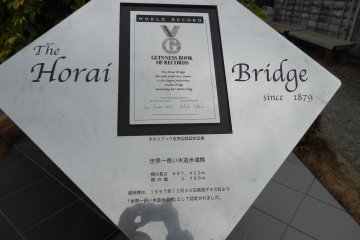 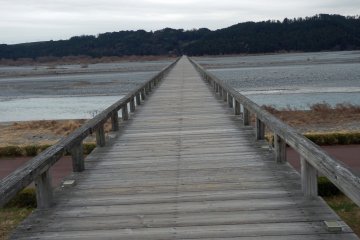