The crown jewel of the area is surely worth the effort

I am describing this hike from Yumoto Onsen (湯元温泉) at Lake Yunoko, although this is probably the most strenuous option to tackle the mountain. However, don’t stop reading now, as there is an alternative, which saves you a big deal of vertical meters to climb. If we only had known this before!! No, just kidding, after all, we are happy to have chosen this trail. We wanted a really long hike, and that’s what we got! Anyway, at the end of the article you’ll find some information about the alternative route.

The trail starts at the bottom of the ski lifts near the campground, and is very well signposted (Mae-Shirane-前白根山 and/or Oku-Shirane-奥白根山). I recommend, however, copying the Japanese names of the different mountains and lakes in this article, as the signs are in Japanese only. At first the trail heads up next to the ski lifts. From the top of the lifts, it turns left, climbing steeply through the forest. After about 3 hours from the start we reached the first peak, Mae-Shirane, with fantastic views on Mount Oku-Shirane in front of us and the incredibly blue crater lake Ghoshiki-numa (五色沼) below. For a brief moment I thought “Why don’t we stay here, it’s beautiful, it’s all I need!”, but then I took out my binoculars to see if there were people on the top of Mount Oku-Shirane. And guess what, yes, there were, and quite some people actually, and my next thought was “How the hell did they get there already?” I should find out later…

To get to the top of Mount Oku-Shirane (2578m), the trail now descended for about 30 minutes, passing an emergency hut on the way, then it headed up again for a final 1-hour climb. We made it! The view from the top was absolutely breath-taking. It’s the highest peak in the area, but it feels like the highest point on earth!

For the way back we carried on over the highest point, which is marked by a wooden sign, and followed the steep path down to the north. At a T-junction we turned right to a small pond called Mida-ga-ike (弥陀ヶ池). Soon after the pond we turned left to go uphill again, following the sign to Goshiki-yama (五色沼山). It took about 30 minutes to get to the top of Goshiki-yama, from where we headed left and followed this path all the way down back to Yumoto Onsen. After 20-30 minutes or so, there was a junction (also signposted); we kept right. In the beginning the trail was quite pleasant; however, it became steeper and steeper as we entered the forest. Oh yes, we were tired by then; but happy too!

In total, this was a 9-hour tour, lunch break included, tackling 1,300 vertical meters.

Now, here comes the good news: There is a ropeway called Nikkō Shiranesan Ropeway (日光白根山ロープウェイ) at the Marunuma Kogen ski resort (丸沼高原スキー場) on the other side of the mountain, in Gunma Prefecture. That definitely explains the number of people on the top when we arrived. The ropeway goes up to 2000m, which leaves you with 500 vertical meters to climb, very doable! 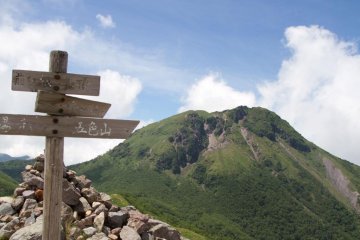 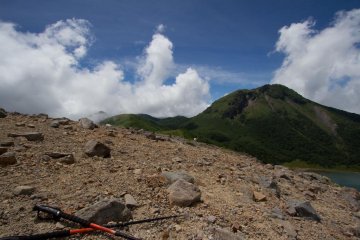 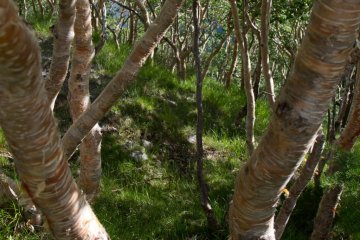 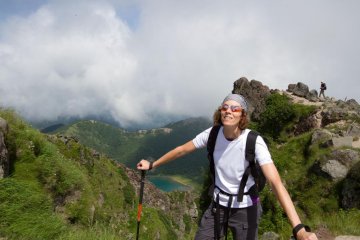 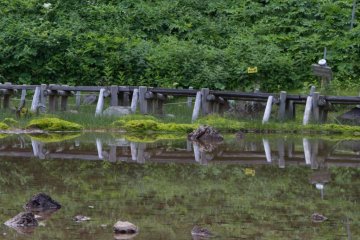