Nasunogahara is a vast recreational park with dozens of things to do and see. There is even a campsite in the park. The park is ideal for families visiting Nasu-Shiobara, Tochigi Prefecture. Apart from permanent attractions, they also have seasonal facilities including a large outdoor aqua park.

Some of the attractions in the park include:

There is also grass sledging in a different area of the park near the camp site. This attraction is also for both adults and children. They have a large slope for older children and adults and a separate smaller slope for children. You have to pay a nominal fee to rent the sledges. Beside the grass sledging there are tennis courts for hire. Nearby is the aqua park which only opens in July and August.

There is a windmill in the center of the park which has become somewhat a symbol of Nasunogahara park. In April, tulips grow in front of the windmill. The campsite in the park has gorgeous late blooming cherry blossoms. The park also has cherry blossoms, daffodils, lilies and hydrangea to name but a few. You can see autumn leaves in November too.

The park is open all year round, but some of the attractions within the park are seasonal, such as the Aqua Park. Also, there are parts of the park that are accessible 24 hours a day, but the official hours of the park are 8.30 am to 5.30 pm. The park itself is free to enter, but some of the activities have individual charges. Most are reasonably priced. Parking is plentiful and free.

By car: the park is about a ten minute drive from the Nishinasuno Shiobara Interchange of the Tohoku expressway.

By public transport: the park is about a 20 minute walk from Senbonmatsu Farm. A bus goes from JR Utsunomiya line’s Nishi Nasuno station. The bus ride takes about 15 minutes. 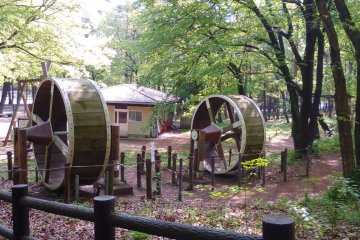 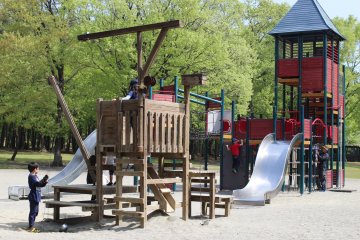 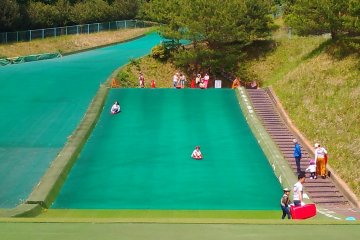