Hyakkenzan Gorge in the south of the Kii Peninsula is not only a scenic place with many waterfalls but there is also a virgin forest. It is a great place to learn something about the flora and fauna of this area from a local guide.

If you walked the nearby Kumano Kodo pilgrimage trails, then you will have an image of cedar and cypress forests in Kumano. Not so here: virgin forest still grows in this valley. This type of forest is becoming a rare sight now even on the Kii Peninsula where planted forests dominate the landscape.

Virgin forest is the original forest before intervention of humans. Most of Japan’s forest now consists of secondary forest. Other pockets of virgin forest, also called primeval forest, that are known to the author are the Nachi Primeval Forest, only accessible as part of a guided tour in spring, and the Kasuga Primeval Forest, a part of which is always open to the public.

In Hyakkenzan's virgin forest you can enjoy a great variety of trees, wild plants and many types of moss. Summer is the best season to be here, as after the raining season the forest floor is soaked with water providing for a lush green all around.

Some trees have plates with the name of the tree and a short explanation written on them in Japanese but listening to the guide’s explanations is much more fun and engaging.

While this hike is not promoted as a nature education walk, the local guide is extremely knowledgeable. If you have been wondering what is growing in the Japanese forests there is a chance to get to know some of the species here.

Our guide informed us that Tochi Mochi were once a sought-after delicacy but nowadays they are not so common. These sweets were made from the nuts of the horse chestnut but the cooking process apparently takes too long to make it an easy sweets option.

The rocks along the trail are covered with all sorts of moss. Did you know that there are 2,500 types of moss (koke) in Japan? Compared to 12,000 types worldwide, this is quite a bit. Here in the valley you will find a great variety, for example Shinobu, Hinoki and Hai.

The guide points out that there is Shinobu-no-koke, which is a moss, and Koke-no-shinobu, which isn’t a moss at all but a perennial fern! Who would have known the difference!

Iwatabako (Conandron) grew on a large rock in a beautiful display of nature art. We learned that this perennial flowering plant’s habitat are damp rock faces.

We knew that we had passed a certain elevation when the guide pointed out a Himeshara, a Japanese Stewartia, a tree related to the Camellia that only grows at an elevation of 400 to 800 meters.

In terms of wildlife we did not see the elusive Kamo-shika, an endangered species that is populating the remote mountains of the Kii Peninsula, but we saw deer, a large frog and a colorful Gecko as well as plenty of small Amago fish in the stream.

Our guide, never short of a story, told us that there is also an increasing number of Anaguma, the Japanese Badger. They are now a pest to the locals but in the old days they were a source of protein. The meat was eaten as a stew in miso broth, sold as Tanuki Shiru. Apparently the Tanuki, or Japanese raccoon, don’t taste good, hence secretly replaced by the badger, but what counts is their mysterious aura. The recipe has been passed down in old tales but is all but forgotten now.

The geological and historical rundown

Hence the type of stone here is a soft basalt stone that over the millennia eroded. The stone formations here are said to be 10 million years old. The Nachi Fall, Japan’s tallest waterfall also located in Kumano, is 20 million years old. Both areas are part of the same Geo Park.

Our guide explained that this valley was found by the locals in the 1960s. At the time there was a government campaign to cut primeval forest and replant with cedar and cypress. As the locals cut down the original forest, they found this valley. They were impressed with the beauty of the place and decided to keep the primeval forest near the stream and falls.

On the upper end of the trail there is a site called the Sentaibutsu, or the “1,000 Great Buddhas”. The name suggests that this was once a religious site. It has been speculated that there might be some connection to the Kumano Kodo trails nearby. Investigations were made but no conclusion was reached. The Sentaibutsu are still a bit of a mystery.

The info board at the parking lot gives you the names of each waterfall or pool in English and along the trail there are also boards to state the name of each nature attraction in English again. If you speak Japanese, then you might want to guess from the kanji what each name means.

Alternatively, your guide is happy to explain the ‘story’ behind each waterfall and pool. Listening to a local explain the locations is very interesting. Here are some of the stories:

Umetaro-buchi pool: there is a local tale that a man of the name Umetaro cut down an old Ubamegashi (Ubame oak) tree. Ubamegashi is known for being a strong tree and promptly grew again!

Kosame-buchi pool: Kosame is a word in local dialect which means Amago, a small river fish that you can still see in the stream here in some places. The locals must like their dialect because the area usually known as Kumano is here called Iya. Same kanji, how confusing for foreigners!

Jimbei-buchi pool: there used to be a Kappa, one of the infamous Japanese Yokai, around here who would threaten the locals. In the folk tale, a local guy named Jimbei made a deal with the Kappa: they would do a sumo match, and when Jimbei won, the Kappa would leave the locals alone. Well, he won and the Kappa trouble ended.

Amagoi-no-taki fall: this is a sacred place where the locals would go and perform magical rituals and prayers for rain (amagoi)

We recommend that you hire a local guide to make the most of your experience at Hyakkenzan Gorge. Mr. Akagi Natsuya from Kumano Satoyama Club is very happy to explain the flora and fauna that he grew up in and also tell you all the folklore and tales of this area. He will also watch out for your safety. Please note that there is no mobile phone reception in this valley!

It is not easy to get to Hyakkenzan Valley. The preferred way of transport is by private or rental car. It is easiest to arrange for meeting your guide at the Ayukawa Town Hall. Ayukawa is located along National Road 311 that connects Kii-Tanabe with Hongu and Shingu and many other places on the famous Kumano Kodo trails. From Ayukawa Town Hall you will follow small countryside lanes for 40 minutes. First Road 221, then Road 37 and Road 221. 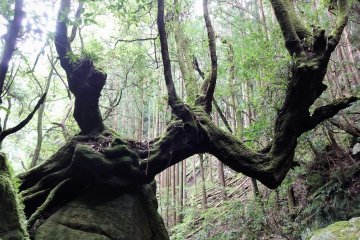 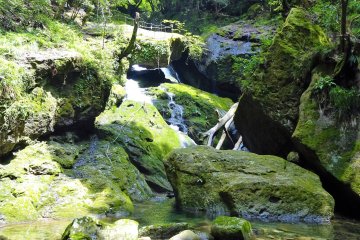 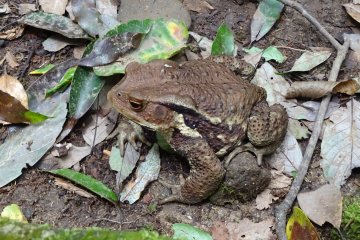 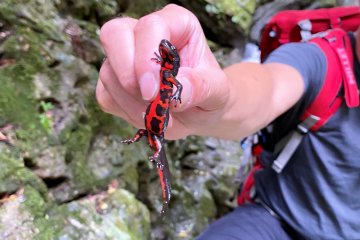 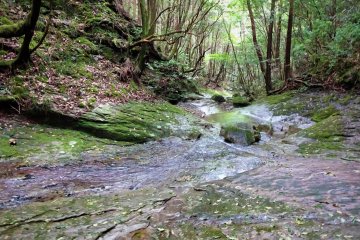