Hidden in Shimotsu, a local neighborhood of Kainan City (Wakayama Prefecture) is a shrine that is dedicated to the Shinto God of the Mikan, the satsuma mandarin. It is not surprising to have such a shrine here: the area is famous for growing satsuma mandarins.

We met Kazunori Maeyama, the Shinto Priest in Residence at Kitsumoto Jinja. He explained to us about the long history of growing citrus fruits in Japan.

The name of the Shinto deity worshipped here is Tajimamori. He is portrayed as a man wearing a Yayoi Period (300 BC to 250 AD) costume. In local legend Tajimamori is said to have brought a Tachibana tree from China to Japan. This was during the reign of Emperor Suinin (around 70 AD), a legendary Emperor, who is counted as no 11 in the traditional succession of Japanese Emperors.

In Japan’s oldest records, in the Kojiki (712 AD) and the Nihon Shoki (720 AD), it is written that a Tachibana tree was planted and it grew to become the ancestor tree of all mikan trees now. An offspring of the original Tachibana tree has been kept on the premises of the shrine throughout the centuries and the local people have made great efforts to preserve the tree. The current tree is apparently 130 years old.

The original location of this shrine was on a hill further north but it was relocated here, probably in the 15th century, a date to this effect is marked on the shrine building. This shrine is located by the Kumano Kodo trail that connected Kyoto with Kumano in the old days.

Nowadays, the Kumano Kodo trail between Kyoto and Tanabe further down on the Kii Peninsula is mostly overbuild but here in Kainan an original stretch of the trail still exists. This part of the trail runs between Kainan and Miyahara and it is a total of 15 km in length, whereby Kitsumoto Jinja is located roughly in the middle. This trail is quite popular in autumn because of its nice scenery: it leads through the mikan fields of Arida and in autumn the mikan trees are loaded with fruits ready to be picked.

Emperor Shirakawa (12th century) is said to have stayed at this shrine while on a pilgrimage to Kumano. Emperor Shirakawa is well-known in Japanese history for having made visits to the Kumano Sanzan, the Three Grand Shrines of Kumano. He has walked the Kumano Kodo trails from Kyoto to Kumano several times.

Kitsumoto Shrine was designated as a historical site by Wakayama Prefecture in 1974 because it is the former site of one of the 99 oji, or subsidiary shrines (probably the 40th oji) that were said to have been placed along the Kumano Kodo trail between Kyoto and Kumano. These oji served not only as places for worship but also as resting places where shelter and food could be had for men and horses.

The Kishu branch of the Tokugawa clan that ruled as Shoguns over Japan during the feudal period did some major repair work on this shrine. The Kishu Tokugawa family were very influential on the Kii Peninsula and their castle (now Wakayama Castle) can still be visited in nowadays Wakayama City.

Actually, they were also quite industrious and first introduced mikan farming on the hills of Arida. It was not possible to build rice paddies on the steep hills here and hence mikan were grown here instead of rice. These "Kishu Mikan" were shipped to and introduced in Edo, now Tokyo, by Bunzaemon Kinokuniya (1669-1734), a local merchant. This is when Kishu Mikan became famous and Kinokuniya became rich.

Apart from the Arida area, the Tanabe area, also in Wakayama Prefecture, is also a major satsuma mandarin producer now.

After showing us around the shrine premises, Mr. Maeyama took us to a nearby small museum that is dedicated to citrus fruits and related research, especially to that of Professor Chozaburo Tanaka (1885-1976). Tanaka, a Japanese botanist, established the taxonomic classification system for citrus, the "Tanaka System". He is the author of 180 botanical names in the citrus family!

You have to be a botanist or a citrus geek to be interested in so much detail about citrus fruits. However, there were some interesting pieces of information that relate to Japanese culture:

The peel of the Tachibana fruit is mentioned as a medicine that brings immortality. The flowers of the Tachibana have a strong sweet scent and “always smell good” and a fruit-bearing Tachibana tree has become a New Year’s decoration.

The Tachibana features amongst the dolls displayed at the Hina-matsuri (Doll’s Day or Girl’s Day on March 3). On a platform covered with red cloth and set in seven tiers many dolls that represent the Royal Court during the Heian Period of Japanese history are shown. On one of the levels where usually Ministers are displayed, there is a Tachibana tree on the right side and a Cherry tree on the left side but not all Hina-matsuri displays have it.

The Showa Emperor declared that the Tachibana is a symbol of culture. Since then (1937) a Tachibana features on the Order of Culture (Bunka-kunshō), an award given for outstanding accomplishments in the field of culture. The badge is made in the shape of a Tachibana blossom which is suspended on a wreath of mandarin orange leaves and fruit.

The Mikan Matsuri has been taking place every year on the second Sunday in October for over 40 years now. Participants in this very local festival are mainly mikan farmers from the Arida mikan orchards.

There are also representatives from JA and the prefecture office, and of course people from the local neighborhood who enjoy watching the Lion Dance and cheering the local children who carry a Kodomo Mikoshi (small portable shrine carried by children) before everybody tries to catch some mochi (rice cake) at the Mochi Nage (Rice cake throwing).

The prayers of the day are for accident-free mikan harvesting, a plentiful harvest and hence a lot of income for the farmers. The “Hatsumono”, the first mikan of the season, are presented to the Kami-sama, the Shinto deity. In other regions of Japan the spring and the autumn festivals at the shrines are dedicated to rice planting and harvesting but here in Arida the object of dedication is satsuma mandarins.

The spring festival here is now called the Okashi Festival (Sweets Festival). This festival stems from the days when fruits like mikan were considered sweets. On this day representatives from confectionary shops and factories come here to pray for good business. It is said that Kitsumoto Jinja is one of only few shrines in Japan where sweets are celebrated, and this now includes Japanese sweets and Western sweets.

About 150 confectionary shops from all over Japan send their sweet samples to the shrine where the Shinto priest prays for the prosperity of each company before the sweets are distributed amongst the locals and visitors on that day. Mark the date and come out for enjoying some sweets made across Japan. 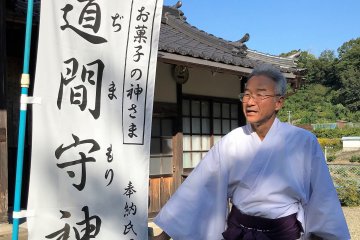 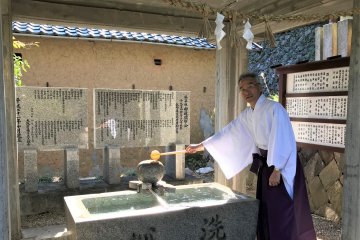 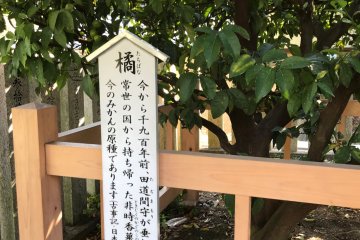 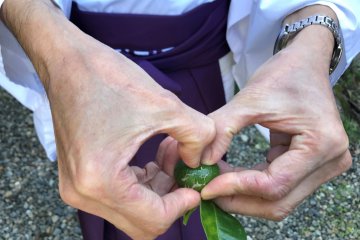 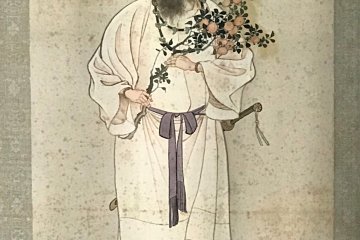 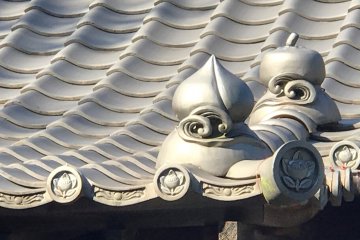 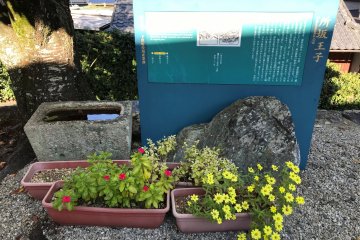 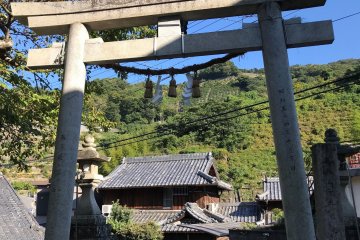 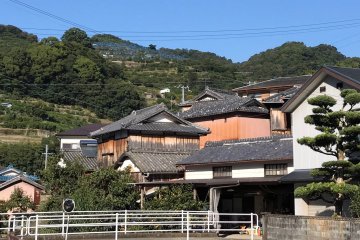 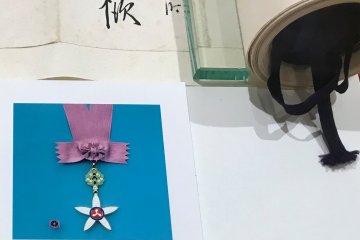 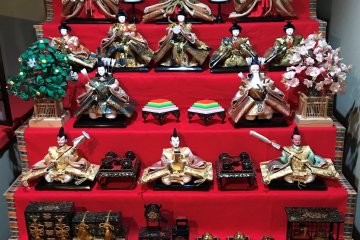