Monks live here so expect to see them on your travels (Photo: Richard Kirchner)

Everyone has their own goals and agenda for a vacation in Japan. But if you really want to experience something different from what you've ever experienced culturally or visually, I would find some time to visit Koyasan and stay in a Buddhist Temple. In 2004 Mt. Koya was designated as a World Heritage Site.

Reading other's comments on-line about their experience at Koyasan, for many it was the highlight of their trip to Japan. I took some relatives there on their first full day in Japan. Coming from Milwaukee Wisconsin one day, and then Koyasan the next is quite a cultural change.

We came in on the Shinkansen bullet train from the north. We disembarked at Shin-Osaka station and took the Midosuji Subway line to Namba Subway Station. Then there is a short walk to Namba Nankai Station where you'll catch the Nankai Koya Line. There are several types of trains that leave from here and not all of them end up going the full distance to Gokurakubashi station. So you'll want to get on the appropriate express train. The ride up to Gokurakubashi station is also wonderful. You will slowly get out of Osaka City and it will give way to the countryside. Then you'll start climbing in elevation as you head up into the mountains. Along the way you will pass by many smaller train stations that the local line stops at. You will also stop at a few stations yourself which are very picturesque. These are a far cry from the huge train stations of Tokyo, Osaka, or Kyoto.

Once you reach the end of the line at Gokurakubashi, you might be tempted to think you're at the final destination. But you still have to get on a cable-car (not the overhead variety) with a 30 degree incline up a hill that will take you to Koyasan. You're almost there - only now you have to take a bus that will take you into town. Walking is not allowed along the approximately 2 km route.

If you're staying at a temple in Koya, then you simply get off at the nearest bus stop to your temple and walk there. I stayed at the Shojoshin-in temple which is right next to Okunoin and a must see. The air is like an alpine village. Despite it being July, the air was crisp and cool with a smell of cedar and pine.

When we arrived at Shojoshin-in temple we found the "office" and were escorted to a low table with seating on a cushioned floor. Your shoes are deposited at entry. A monk checked us in and he explained where we would be staying. There were six in our group and we had reserved the Hanare or "private guest villa." He explained some ground rules and we were off.

We could not have asked for more. We did indeed have a separate house with its own garden out front. There were three bedrooms separated by shoji screens, a "living room" with a table and tea, several bathrooms, a hot soaking cedar tub, and a screened in porch. It was warm, inviting, and our guests were truly impressed. After a short rest and unpacking period, we headed over to Okunoin World Heritage site for a hike among the tombs and toward Kukai Mausoleum at the end of the trail.

Okunoin is really an incredible place. A trail leads through hundreds of thousands of tombstones, some of which date back to over 1,000 years ago. Huge moss covered cedar trees line the path, themselves hundreds of years old. Lanterns and occasional monks walking by add to the mystique of the place. At the end of the 2 km trail there are some impressive sights to see. We then headed back to explore the town a bit, but decided it would be worth coming back to look at Okunoin at night.

In town we walked over the the visitor center in the center of town and managed to find a nice small izakaya (perhaps the only one in Koya) called Miyasan. Run by a husband and wife team, it was a cozy place where I wish we could have spent more time.

Dinner is included with your stay and is vegetarian. However it was both filling and excellent. Then the trip back into Okunoin began after dark. It was just as beautiful and more mysterious. By luck, we happened upon a Buddhist baptism of sorts in a river where dozens of people were baptized in a ceremony complete with chanting. Simply surreal and an experience not to be forgotten. Give Koyasan two days if possible. We did it in one afternoon and one night and were a bit rushed. In the morning, you will be expected to attend the morning prayer at about 6:00 a.m. and then you'll get another great meal at breakfast. 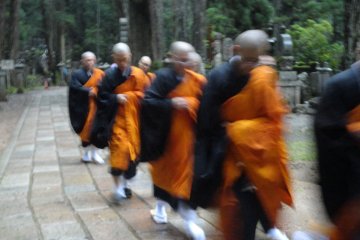 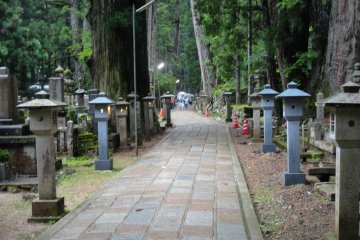 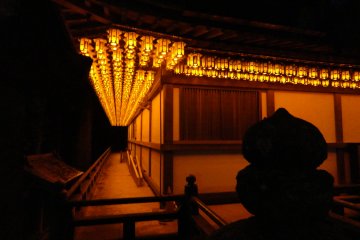 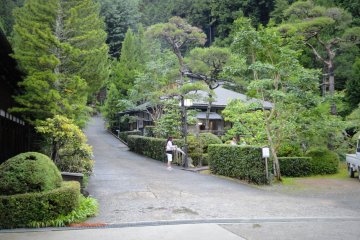 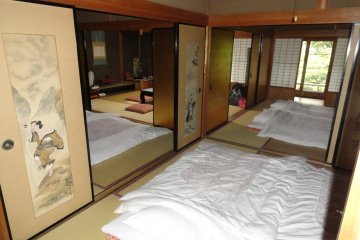 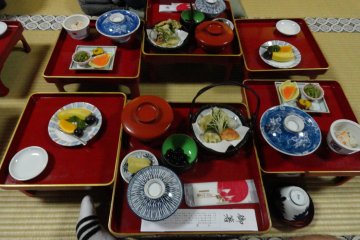 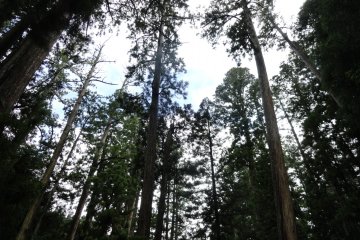 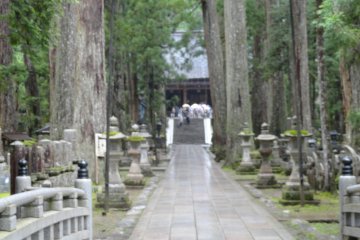 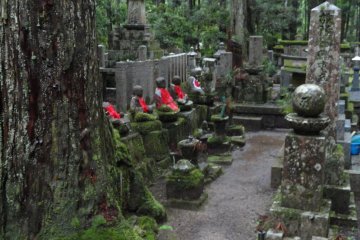 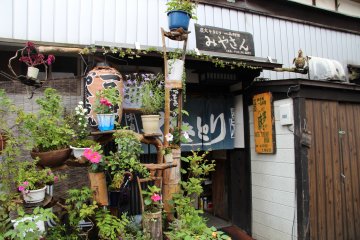