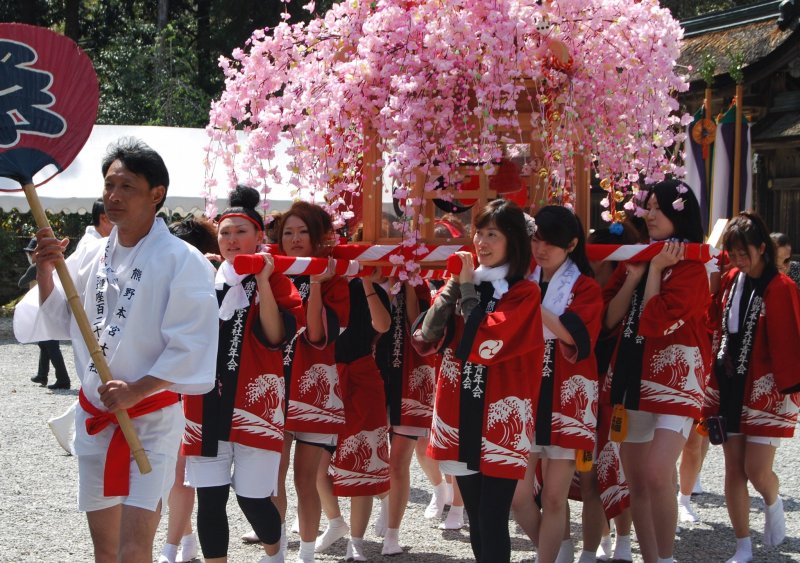 The Kumano Hongu Shrine Festival takes place each year from April 13 to 15 in Hongu Town in the south of Wakayama Prefecture.

First a ceremony takes place at the Kumano Hongu Shrine where a procession is forming. Then this procession makes its way from the shrine to Oyunohara, a sandbank in the Kumano River and one of Kumano’s most holy sites.Oyunohara is now a wide open space but it used to be the place where the Kumano Hongu Shrine once stood before it got washed away by a flooding in the late 19th century. Here a series of sacred ceremonies are performed to honor the Kumano Deities and the tradition of the Kumano Kodo pilgrimage.

There are Mikoshi (portable shrines) carried by men, women and children. Young boys are carried on the shoulders of their dads because they are considered gods and should not touch the ground until a sacred ceremony was performed. There are groups of teenage girls and boys who perform a sacred dance. There are also Yamabushi, the practitioners of Shugendo, who perform a fire ritual, and there are Aikido demonstrations because this area is the birthplace of Aikido, a Japanese martial art.

This is a local spectacle that does not draw millions of visitors like spring festivals elsewhere in Japan. This allows you to see everything close-up. The crowd consists mainly of locals which gives you a chance for a chat. After the prayer rituals and spiritual ceremonies comes the fun, which consists of eating, drinking and playing. Some local delicacies and local sake is shared around and soon all participants are in a festive mood.

In front of the giant torii gate, the largest in Japan, cherry blossoms are in full bloom. On the mountain across the Kumano River, the only river in the world that is registered as a UNESCO river pilgrimage site, there is the Hongu top sakura spot, a mountain slope full of cherry trees, which are in full bloom during the festival. Why not stop by coming spring and enjoy the festival, followed by a boats tour down Kumano River?

Hongu has no train station. You need to take a JR train from either Nagoya to Shingu City or from Osaka to Tanabe City. These would be the Nanki Wide View Express Train and the Kuroshio Express Train respectively. From Shingu and Tanabe you need to take a public bus to Hongu. Alternatively, you can rent a car and drive yourself, or hire a taxi. Beware that hiring a taxi might cost your dearly because from Shingu it is 40km and from Tanabe 60km to Hongu.