Mountains shelter the town from all sides (Photo: Peter Bungate)

A hidden gem in the mountains of Yamagata Prefecture

Looking for an authentic experience of Japanese hospitality where you are treated as a guest of the community and not just a tourist? Hijiori Onsen is just what you have been looking for.

A number of recently popular destinations have made great efforts to boost their profile and attract foreign visitors by effectively transforming themselves into a tourist-centric environment, which, to some, takes away from the authentic experience you might be after. Hijiori Onsen is not that kind of place. Nestled in the mountains of central Yamagata Prefecture, within the caldera of an ancient volcano, Hijiori Onsen, as the legend goes, has been receiving guests and perfecting Japanese hospitality for almost 1,200 years.

In pre-modern Japan, farmers and those who worked on the land would take the winters off as a time for relaxation and recuperation before the spring planting season began. In those winters, it was common for farmers and their families to retire to hot spring towns to bathe each day in the hot spring waters. This tradition was known as Toji (湯治) - literally, hot water cure. The healing properties of the hot springs were particularly treasured for their ability to soothe aches, broken bones, ailments and heal abrasions.

The tradition of Toji is fading as the world moves on but this doesn’t mean that the sincerity of the tradition is being lost. The relaxation and recuperation that has been drawing people to Hijiori Onsen for years can certainly be found in the hot springs and surrounding natural scenery but is most strikingly encountered in the genuine hospitality of the individuals you will meet.

The charisma of Hijiori Onsen

From the time you crest the mountains that shelter the town on all sides and start your approach down into the township itself, the quaint charismatic spirit of Hijiori Onsen will start to work its magic on you. According to local sources, the traditions of Hijiori Onsen have been carried on since the Edo period by the “thirty-six families of Hijiori” and as soon as you arrive it is obvious that the strong community bonds formed over time continue today.

The best illustration of this sense of community is the fact that each ryokan provides traditional wooden geta clogs and rain/snow boots for its guests, which can be freely exchanged or left at any of the other ryokans in town as you move from hot spring to hot spring. In a small community of approximately 320 people, everyone knows each other and is happy to share. As you stroll through the town in your yukata and wooden geta, it is common to see visitors and locals casually sitting and chatting on verandas, waving as you walk past.

This kind of attitude throughout the town, in addition to its relatively small size (you can easily walk the perimeter of the town in two hours) adds up to a wonderfully small community that is eager to welcome you as their newest member regardless of your length of stay.

What not to miss

Despite being a small town, Hijiori Onsen boasts no less than 20 ryokans for you to choose from, all of which are located along the main street and walking distance to the town’s many hot springs. The lodgings are comfortable, the meals are exquisite and yukata and wooden geta are provided for your free use. It’s a wonderfully tranquil experience to stroll through the town in a yukata and wooden geta clogs and stop in along the way into the different hot springs baths in each ryokan, as well as the open-air footbaths. The whole purpose of the tradition of Toji is to relax and slow down to your own comfortable pace. So, though Hijiori Onsen may be small, you can easily spend the days casually exploring the different parts of the town.

Between the end of April and November the main street of the town is transformed each morning into a lively local market where locals come out to buy and sell locally grown produce as well as seasonal specialties. The town’s community spirit is on full display as neighbours, friends and visitors start off the day socialising and shopping. It's a truly great way to start your day with a chat and a laugh with friends, both new and old.

Yamagata prefecture is already revered among hot spring enthusiasts as each town in the prefecture boasts its own hot springs. However, Hijiori Onsen is unique among them because its location within the caldera of an ancient volcano comprises 17 separate hot springs throughout the town and surrounding areas. With so many hot springs to visit, the local tourism association has even produced a ‘hot spring passport’ for frequent visitors which entitles you to various discounts and privileges.

The Caldera Hot Springs is particularly special as it is one of only a few places in Japan where both a cold fountain spring and hot spring are located together. The result of this combination is naturally carbonated water, which makes for a great refreshing drink after soaking in the warm hot spring waters. It is also used to produce locally made Hijiori cider and soda.

The Tohoku region, and Yamagata prefecture especially, is well known for the craftsmanship of their traditional wooden Kokeshi dolls. Hijiori Onsen is one of three locations within Yamagata prefecture that has its own distinctive and well-regarded style of Kokeshi doll. The town has been crafting these Kokeshi dolls for over 120 years from generation to generation. Hijiori Onsen hosts its Kokeshi Doll Festival on the second Monday in November each year.

In the warmer months, many of the hiking trails in the nearby mountains open up and offer great opportunities to escape into the beautiful surroundings. Soba fields of white flowers, green and gold terraced rice fields and looming mountains invite you to explore to your heart’s content.

The town is also well-known for the large snowfalls it receives in winter – from November to April the town usually receives snow cover of up to three to four meters. There is something very special to be said for those relaxing moments when you are enjoying the warmth of an outdoor hot spring bath while the snow falls gently around you. Additionally, there are ski fields a short 10 minute drive away that get plenty of snow and not many visitors.

Hijiori Onsen also has a number of festivals throughout the year to coincide with the seasons, including the Shikamura Firefly Light Concert, Hijiori Lantern Festival and the Yuza Shrine Festival in summer, and the Kokeshi Doll Festival in Autumn.

However, chief among the festivals is the new year ‘Sange Sange’ festival, which has taken place each year since the town’s foundation. Shinto priests bless local monks and town members and charge them to go forth and carry the blessing throughout the town. Everyone from the town lines the streets to watch and cheer on the procession led by monks blowing conch shells while the others chant prayers and blessings.

There are a number of stops to be made along the way at certain landmarks where different types of Japanese sake are served. At the end of the procession there is a traditional mochi pounding ceremony where all can participate in pounding and eating. Local government officials and members of the police and fire services also receive a special blessing and join everyone in eating the freshly made mochi.

After visiting and experiencing the traditions and hospitality, it’s easy to see why Hijiori Onsen has been a destination for rest and relaxation for the last 1,200 years. If you’re looking for an authentic experience and an escape where time slows to your pace, Hijiori Onsen should be on your list. A hidden gem in the mountains of Yamagata prefecture that will definitely leave you refreshed and wanting to return.

Additionally, from Yamagata Airport, a car service can be arranged to take you directly to Hijiori Onsen. The fee is 2,000 yen per person and will take approximately 1 hour and 30 minutes.

Living and working in Tokyo since January 2014 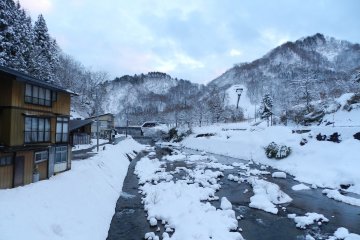 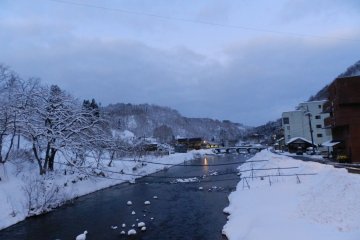 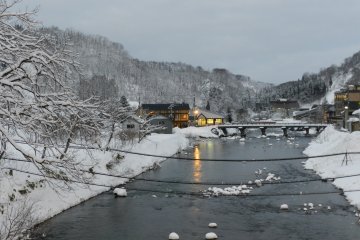 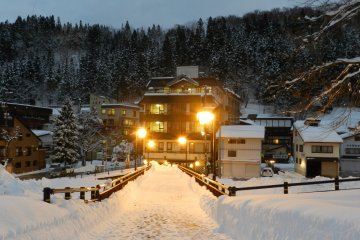 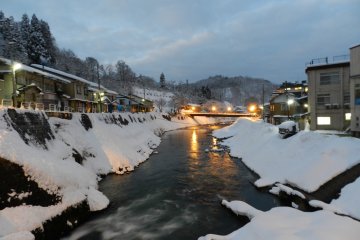 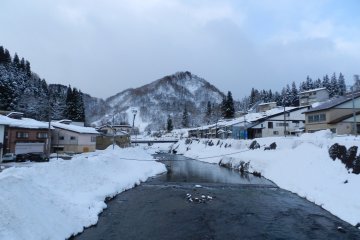 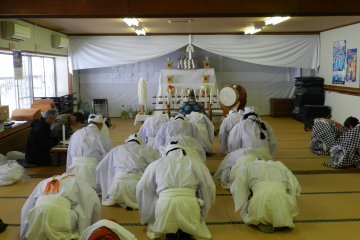 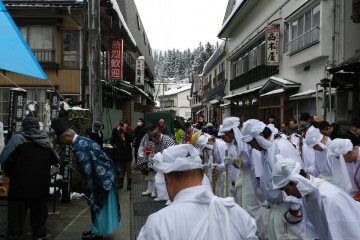 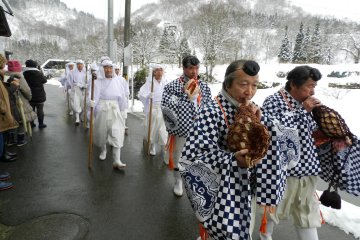 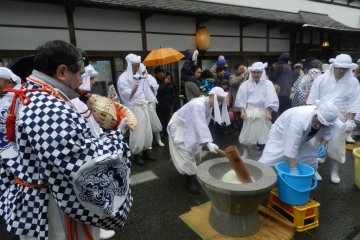 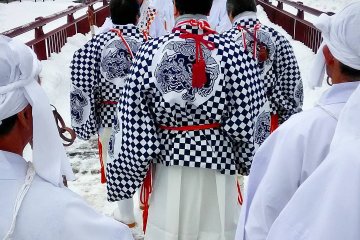 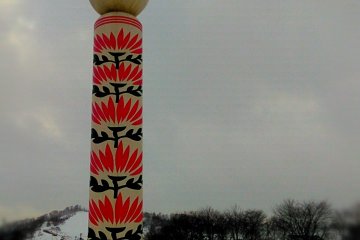 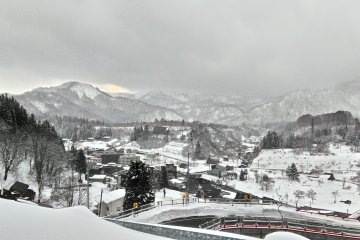 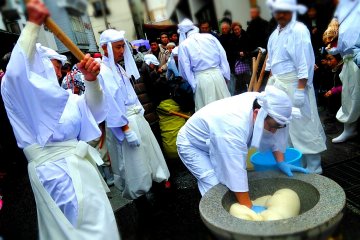 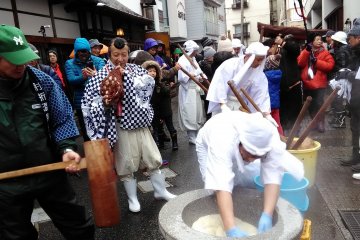 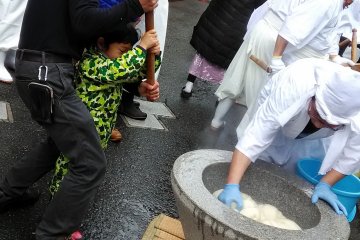 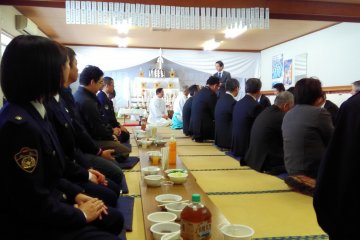