Yutagawa Onsen has been a popular hot spring resort in the Dewa Sanzan area for centuries. Locals will tell you that the onsen's history is reaching back for over 1,300 years.

There have been many ryokan in this small village before but now thre are still nine ryokan operating and they are all lined up along the main street.

Even if you do not want to stay overnight (although I can highly recommend a stay at Kuhe Ryokan), Yutagawa Onsen is worth the trip from Tsuruoka City or from the Dewa Sanzan area. Day-trippers can enjoy the public bathhouse and a foot onsen.

The public bath is the meeting place for the locals. It is a very small place and hence locals and visitors quickly start talking to each other while enjoying a soak in the hot water.

This public bathhouse is not a spa place or anything posh but it has a retro feel to it. For those who like it authentic, this is the right place to come. Due to its small size, it is quite an atmospheric onsen.

The most popular season for visitors to come here is April and May when fresh bamboo shoots are harvested. Yutagawa Onsen’s ryokan are famous for their bamboo shoot dishes in this season.

Don't worry if you miss the bamboo shoots. There is plenty of fresh seafood from the Sea of Japan and wild vegetables from the Dewa Sanzan mountains on the menu.

If you want to venture out of the ryokan, ideally all decked out in traditional onsen gear with yukata and geta, there are a couple of shrines and a temple to explore.

Right opposite the public bath you will find a torii gate and behind it a steep flight of stone steps. Climb up and you will reach Yutagawa Onsen’s hot spring shrine where the onsen’s very own hot spring god is venerated. At the foot of the stone steps, there is a small temple called Obiyama. It has been said that if you worship there, then your fortune will last. I said a prayer there, just in case, and it seems that I have done well since indeed.

There are a couple of small parks at walking distance. One is called Bairin Park and you can find it near the Hachimangu Shrine. The main attraction in the park is takebayashi, which is a kind of thick-stemmed bamboo. However, there are also a great number of plum trees which are in full bloom in spring (April/May in this part of Japan) and there is even a festival, the Ume Matsuri, dedicated to them.

Hachimangu Shrine also becomes a festival location, namely in summer (July, August) when you can see botaru (fireflies) around here.The Botaru Matsuri is popular with locals.

If you don’t stay at a ryokan where you will be served dinner and breakfast, your options for meals in Yutakawa Onsen are limited. There are only a couple of small restaurants and they close early in the evening.

At just around 42 degrees, the onsen water here is not too hot. It is a sodium calcium/ sulfate hot spring with transparent water. Having a bath here is said to heal a great number of illnesses, including muscle pain and digestive disorders.

This is not a large onsen resort and therefore strolling around the main street and checking out the sights before or after having a bath will not take a whole day. A visit here can be done as a half-day trip from Tsuruoka, or else you stay for a night and enjoy the hospitality of the ogami (land lady) at one of the ryokan in Yutakawa. 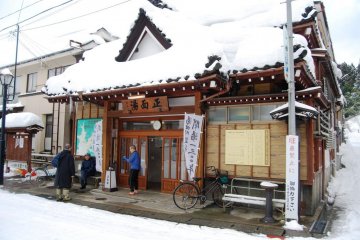 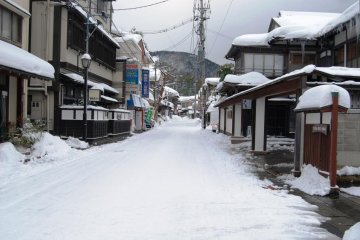 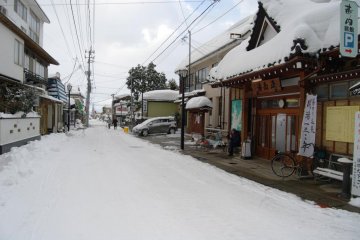 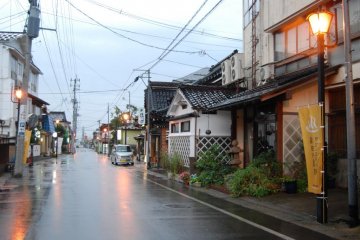 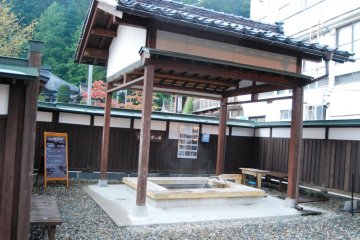 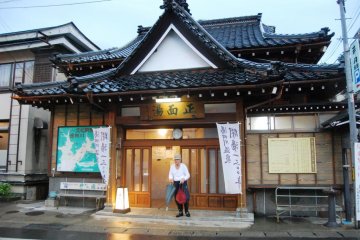