Why not experience a road trip, cruising through the beautiful scenery of Yamaguchi? Yamaguchi-Ube Airport, well connected to Haneda, offers four JAL flights a day, is an easy place to rent a car for the day and enjoy the freedom of the open road.

Taking the 7:30 JAL flight 291 from Haneda, you'll arrive at Yamaguchi-Ube Airport by 09:30 where you'll easily find the adjacent rental car office. Here at the center, you'll find the Times Car Rental counter and if you book in advance you can simply pick up the keys and hit the road.

Following the car navigation, your first destination will be Motonosumi Shrine. After an hour of cruising, you'll have passed through Sanyo-Onoda City and Mine City, and reached Nagato City where you'll catch your first glimpse of the Sea of Japan. Yamaguchi might be the only prefecture in Japan where you can travel from the Seto Inland Sea to the Sea of Japan in just over an hour.

Driving from downtown Nagato City, along the coast of the Sea of Japan, you'll soon see the Mukatsuku Peninsula on the right and begin heading toward it as you climb a steep mountain road. Reaching the peak, experience a breathtaking view of the Sea of Japan, known as "Nagato Blue". Beyond this panorama, the uniquely Japanese spectacle of 233 red torii gates trails across the hillside and unfolds as white waves and blue waters lap at the shore.

Motonosumi Shrine gained considerable fame after it was chosen by CNN as one of the best landscapes in Japan. However, it is actually a relatively recent construction, built around 60 years ago by a local fisherman based on a divine message that he received from a white fox. These unique torii gates were selected from nearby shrines in Shimane Prefecture and gradually transported to this site over an arduous 10-year-long project starting in 1987. Heading up the hill and passing through the arches, you will find another unique feature: an Osaisen-Bako prayer box. You may need good hand-eye coordination and a strong arm to toss your coin into the box that sits above the torii. But it's been said that if you make the shot, your deepest wish will be granted by the fox god.

Stroll a bit toward the sea after enjoying the shrine and you'll find the "Ryugu no Shiofuki", a natural wonder created by waves and rock. Here the waves are pushed into holes in the cliff, causing water to shoot into the air. These jets can reach heights of up to 30 meters during autumn and winter, creating a powerful spectacle resembling a dragon shooting into the sky. This natural phenomenon is sure to impress even the most well-traveled tourists!

Although Motonose Shrine has plenty of parking areas (300 yen per hour), it's a popular destination and the narrow roads can quickly become overwhelmed by visitors in the afternoon. Our recommended schedule means that you'll reach the shrine in the morning.

Next, let's head to another of Yamaguchi's famous beauty spots, Tsunoshima Bridge (simply type in "Tsunoshima Ohashi Bridge" in you navigation system)! Driving 20 minutes along Route 191 alongside the Japan Sea, you'll reach a prefectural road headed toward Tsunoshima. Go through the mountainous landscape and once again you'll be met by the glittering view of the Sea of Japan, this time adorned with a spectacular over-sea bridge.

This 1.5km bridge attracts many cyclists and drivers as the perfectly straight road over the sea curves gently int the island it meets across the shore. Driving along the bridge and heading straight to the island, you'll find plenty of souvenir shops and restaurants on your left and the beautiful Shiokaze Cobalt Blue Beach on your right. Stop the car in the parking area on your left and enjoy strolling through this island paradise!

You'll come across a building that resembles a chapel and while this might seem strange for a small island, what's stranger is that this building (featured prominently in Japanese movies) is actually a public bathroom!

If you drive a little further, you will spot a white tower with an overwhelming ocean view. Tsunoshima Todai was the first western-style lighthouse constructed in Japan in 1876. It boasts an observatory with panoramic views of the island. This is a must-see spot for couples and keen photographers looking for that perfect shot for Instagram.

Phew, leaving the airport around 10 a.m.; it must be about 1 p.m. by now . . . feeling a little peckish? While the seafood on Tsunoshima is great, we recommend that you visit Kawatana Onsen. Approximately 30 minutes by car to the west, you’ll find the entrance to the onsen on your left. For a late lunch try kawara soba, the local food of Yamaguchi. This photogenic food is served on kawara—traditional Japanese roof tiles. These tiles work as a hot plate keeping your mountain of green tea soba noodles, grilled eggs, and beef piping hot; the zing of lemon and fresh green onions are great after a morning of sightseeing. Enjoy with a hot soup broth!

After a late lunch, you can simply head toward the Seto Inland Sea and enjoy the drive back through the spectacular Yamaguchi scenery. After about 2 hours, you’ll arrive at the Yamaguchi-Ube Airport where you can head directly to the rental car parking corner, drop of your keys, and head to the JAL check-in counter. Since you’ll have plenty of time before your flight (number 296 at 19:00), why not enjoy shopping in the airport? You can find tasty local saké, we recommend Dassai. Enjoy the freedom of the open road, nature of Yamaguchi, and local food with this short one-day trip from Tokyo!

Take Ube Municipal Subway from Yamaguchi-Ube Airport to Ube-Shinkawa Station. Take JR Ube line to Ube Station (10 minutes) and then to Asama Station via Sanyo-Honsen (10 minutes). Next, take the Mine line bound for Nagato City and go to the last stop. Take a taxi to the shrine from the station, about 20 minutes.

We recommend you to go there by taxi from the shrine since it is impossible to go by train.

Take the Sanin line from Agawa Station at the Tsunoshima Ohashi Bridge and get off at Kawatana Onsen. Then take a taxi until you arrive.

Please confirm in advance which trains to take since there are very few trains. 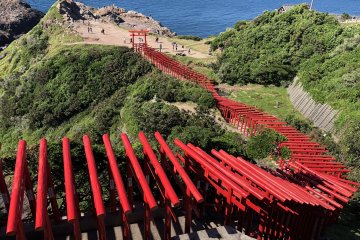 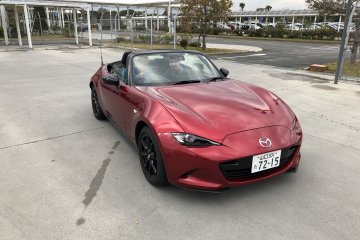 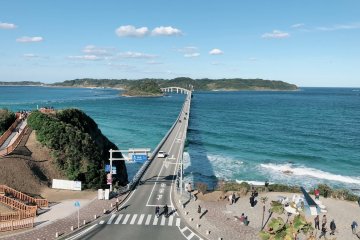 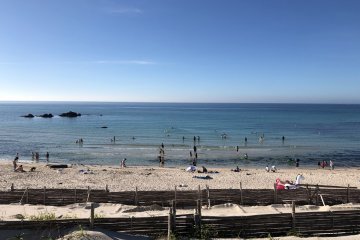 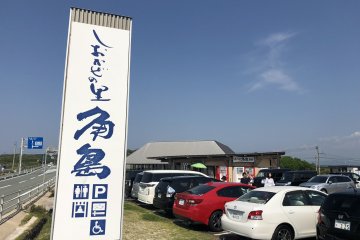 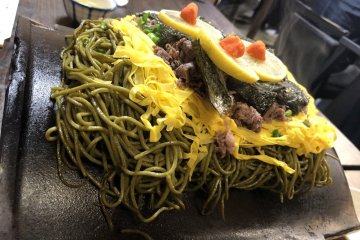 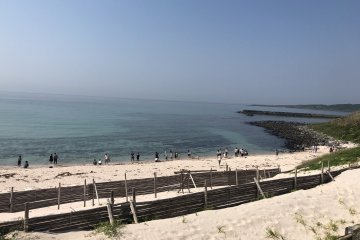