The scent of wet grass

In May I went to Fujiten (Fuji Tenjindaira) in Yamanashi Prefecture to ride my Dirtsurfer and check out the mountainboarding scene in Japan at first hand. Although I was very close to Fuji all day, I didn’t catch a single glimpse of it as a chilly fog was hanging low over the hills. This fog had soaked the grass and dirt of the runs at Fujiten, making for hairy but forgiving riding conditions.

I arrived at Fujiten with plenty of time for riding, and checked the place out. I couldn’t see anybody else there although there were a couple of mountainboards and sundry body armor dumped next to a drinks machine. There was nobody at the reception either, although there was a lot of gear for hire on display. After ringing the bell, a man came and took my 2,500 yen for half a day’s riding (or 3 hours). I had hoped he might be awed and amazed by the sight of my Dirtsurfer, but he wasn’t, and when I asked him if he had seen one before, he said there had been a few at Fujiten. He also said that they hadn’t had much joy with the rope tow. This came as a bit of a shock as I had been expecting to be sitting comfortably on a proper lift.

The first run was amazing. The single available run is not very long, but it’s covered in smooth grass and is steep enough to get real speed going. As soon as I began to pick up speed, I realized how chilly it actually was - by the bottom of the slope, I could hardly see through the tears that formed in my eyes. With a huge grin on my face, I headed back up the hill.

Soon the owners of the other mountainboards turned up. Quickly we were swapping boards and I tried out their Japanese-made 4-wheeler boards, using the rope tow. The tow is meant for this kind of board but it was still a very humiliating experience at first. It was like being repeatedly and insistently goosed in the bum by some wiry old bloke with bony arms. When the goosing gets too much and you fall over, the old bloke gives you a good slapping around the head.

At this point, a group of school kids from Osaka turned up for grass skiing, and another couple arrived from Saitama to try the rental mountainboards (wearing pressed Chinos and nice button down shirts). The slope got rather crowded, and it became necessary to choose a line carefully. A photographer from a Yamanashi newspaper also appeared and started snapping away at everybody. The 4-wheers did some cool jumps off the wooden kickers.

Everybody was biting the dirt quite frequently. My attempts at powerslides (the recommended method of stopping) often ended with me spread-eagled on my back spinning around with no control, with the board attached to only one foot, and my trousers soaked through to my underpants. This is actually more fun than it sounds.

Later a whole crew of ‘old mountainboarders’ showed up, and disappeared off the course under one of the immobile lifts. With the permission of the management they had built a table-top jump and kicker under the lift. It was still a bit new and soft, but they rode it anyway. 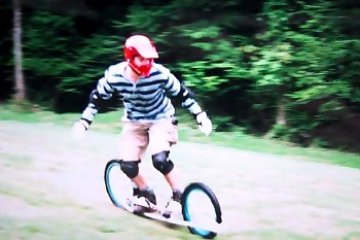 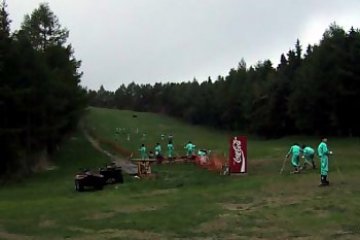 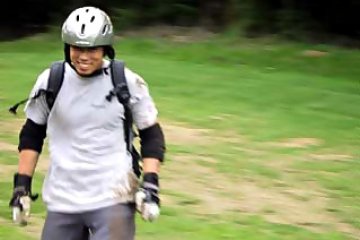 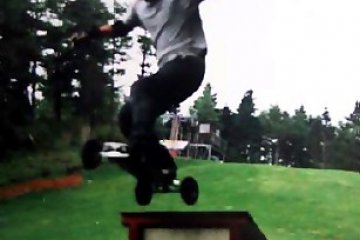 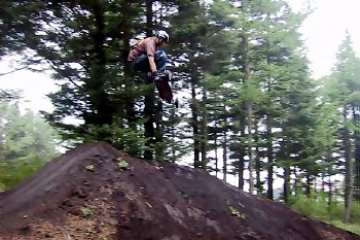