It seems that there haven't always been five lakes in the Fuji Five Lakes area! Once, there was a lake named Lake Utsu. About 800 years ago, lava flows from Mount Fuji divided it into Lake Yamanaka and Lake Oshino, and for a while there were six lakes. However, over time Lake Oshino slowly drained away, leaving in its wake eight spring fed ponds. The water in the ponds originates as snow melt on Mount Fuji, and wells up from the ground after filtering through porous lava layers for about 80 years. It is extremely pure!

Because it comes from Mount Fuji, the water here is sacred. In old times people wishing to climb Mount Fuji came here first to purify themselves by washing in the eight ponds. Today the ponds are a tourist attraction known as Oshino Hakkai, a village of thatched roof houses, a working mill with a water wheel, and quaint shops selling a variety of food and souvenirs.

The eight ponds are named for their various characteristics. For example, Deguchi-ike is the largest of the ponds, and is located some distance from the village at the 'exit' (deguchi) of this region. Shobu-ike is named for the iris beds (shobu) that surround it, Kagami-ike is said to show the clearest reflection of Mount Fuji (kagami is mirror), and Okama-ike is so named because the water bubbles up in a manner reminiscent of water boiling in a pot (okama is pot.) The other ponds are Waku-ike, Choshi-ike, Sokonashi-ike and Nigori-ike.

On a clear day I'm told the ponds look very blue, and there is a stunning view of Mount Fuji. Sadly I was unlucky with the weather, and didn't even get a single glimpse of the famous mountain. However I'm always fascinated by picturesque thatched roofs, and I enjoyed watching the fish swimming in the clear water of the ponds. I also tasted the spring water, and it was indeed very good.

I also really enjoyed wandering around the shops and stalls. I was tempted to buy some of the deliciously fresh vegetables to take home, but decided against it. Large freshly toasted rice crackers also tempted me, but finally I went for toasted mochi (soft sweet rice cake) flavored with mugwort (what is that?!) There was a wonderful looking antique shop, and I was also intrigued by a store selling silk scarves which had baskets of silkworm cocoons outside the door!

If you drive to Oshino Hakkai, there is paid car parking available. You can also reach it by either regular bus or tourist bus from Fujikyu Railway's Fujisan Station. 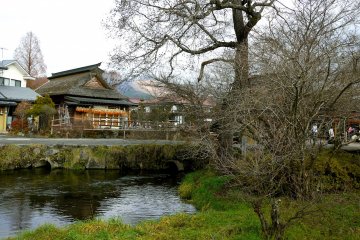 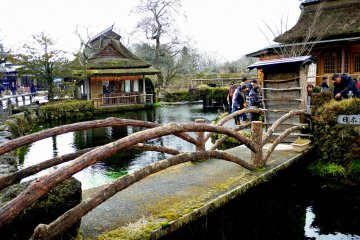 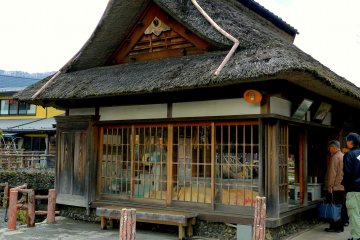 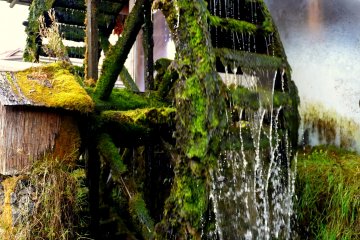 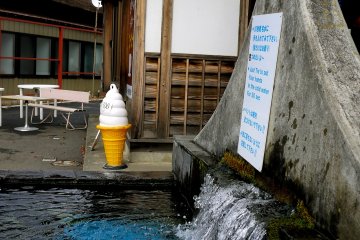 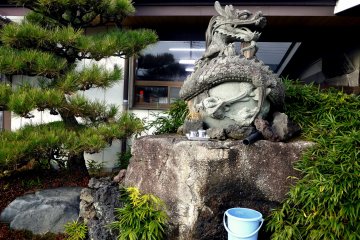 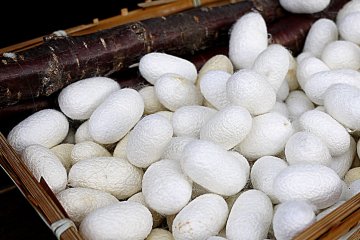 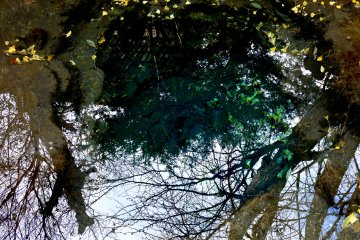 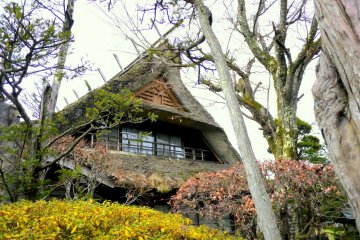 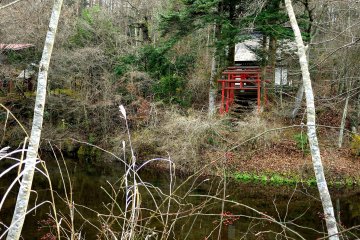