Below the Shitaragahara Historical Museum, and visible from the rooftop observation area, is the long, thin valley where a crucial turning point in Japanese history and samurai warfare took place.

This is the site of one of the most famous samurai battles, the Battle of Nagashino, also known locally as the Battle of Shitaragahara, which took place on May 21st, 1575.

The Takeda army were a battle hardened, well trained samurai battalion. Takeda Katsuyori, in an effort to gain control of the nation, was beginning an advance of the capital, Kyoto. To march on Kyoto necessitated crossing the lands owned by both Tokugawa Ieyasu and Oda Nobunaga. The Takeda had soundly defeated the Tokugawa at the Battle of Mikatagahara some years before, and were confident of another victory. This time however, the concern was the Tokugawa’s strong ally, Oda Nobunaga.

Protecting Ieyasu’s northern regions, and an area important to the Takeda supply lines was Nagashino castle. The castle with 500 inside was surrounded and besieged by 15,000 Takeda troops, however one brave samurai escaped and alerted Ieyasu who, with the Oda clan came to the rescue a week later with 38,000 soldiers.

Interestingly, along with their weapons and armor, each Oda samurai carried a long, thin log with them.

The logs were used to build two kilometers of simple wooden palisade along the western side of the valley at the foot of the rolling hills. Running through the middle of the valley was the small Rengo River. Either side of the river were rice paddies. On the opposite side, the Takeda had arranged themselves into battle formations on the slopes of the low mountains.

Behind the wooden fencing waited some 3,000 Oda troops armed with matchlock guns. The gun had only been introduced to Japan some twenty years previously by Portuguese traders, but already the nature of the weapon had been embraced by the samurai.

The Takeda forces, their front line samurai dressed in red lacquered armor were compelled to attack. Running onto the narrow battlefield, they first encountered the soft muddy rice paddies, which caused a slowdown, they then had to ford the Rengo River, and tackle more rice paddies before reaching the fence. Hardly any of them got that far.

The Oda forces gunners felled them immediately in a great blast of gunfire!

Katsoyori knew that the guns took at least 40 seconds under ideal conditions to prime and reload, and battle conditions were far from ideal. After the first volley, he quickly sent a second wave of samurai into the frey. Within seconds they were felled by more matchlock fire. Katsuyori, shocked, sent yet another line of troops, they too were mown down before they could reach the river.

Nobunaga, realizing the projectile weapons shortcoming, had organized his gunners into lines of three around the barricades. After the first guns were fired, the second line took aim and shot. Once their breaches had been emptied, the third line took aim. By then, the first line had reloaded, and were ready to continue shooting the enemy, and so on in a machine gun like fashion.

Eight hours later, 10,000 Takeda and 6,000 allied troops lay dead across the valley. The much feared Takeda clan had been decimated and would end seven years later.

A few hundred meters of the wooden fencing has been recreated by the Shinshiro City Council which gives you a good idea of what conditions would have looked like over 400 years ago. From the palisade you can look out over the rice paddies and Rengo River to where the Takeda launched their attack.

If you have the time, the various generals’ war camps on both sides can still be visited. Maps with the details of the sites and memorial stones are available, however information is in Japanese only. One important site, where the Oda and Tokugawa main camp moved to is in danger of being swallowed up by construction on a new highway to run through the middle of the battlefield.

Every May, members of the Nagashino teppotai, antique matchlock gunnery team don their samurai armor and with matchlock guns in hand, recreate the battle. The guns, all real, are loaded only with gunpowder, but a loud bang, a shower of sparks and clouds of thick smoke provides for some exciting entertainment. More demonstrations happen in July, and again August 15 when a fire dance is held as part of a memorial service for the war dead.

The nearby Shitaragahara Historical Museum on the Takeda side of the valley contains a most impressive range of items and documents related to the battle. There is a large selection of over 50 matchlock guns, the longest being some 3.32 meters in length, the shortest about 40 centimeters long. Old maps, scrolls, paintings, video presentations round out this most rewarding experience.

Some fine examples of samurai armor, helmets and weapons, folding screens also fill the many glass cases. Take the elevator to the roof top for a view of the reconstructed palisade on the opposite side of the valley. There isn’t a great deal of information in English, but the displays are relatively easy to understand and are still worth viewing.

The battlefield and museum are a must see for fans of Japanese history, samurai and students of militaria. Add to your trip a visit to the nearby Nagashino Castle and their excellent but small museum too. (Details on that trip available here on JapanTourist) 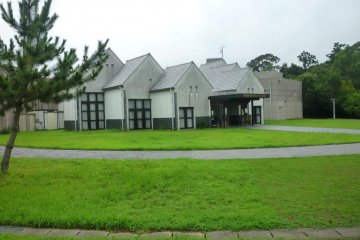 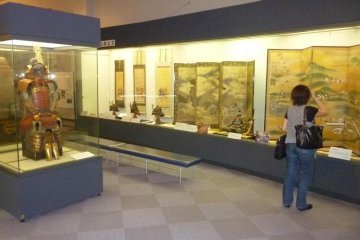 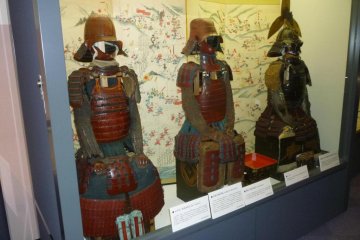 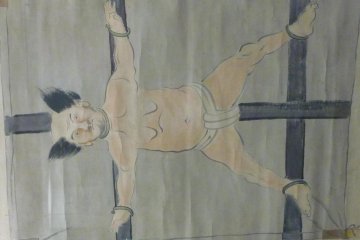 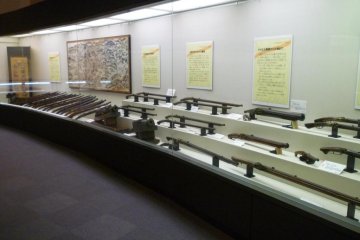 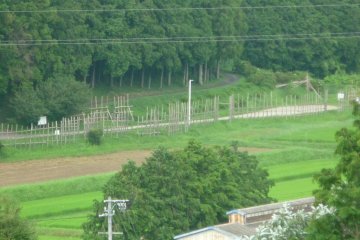 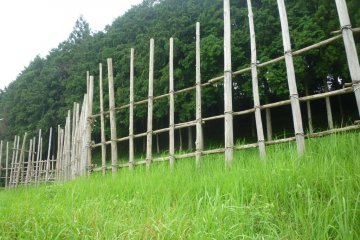 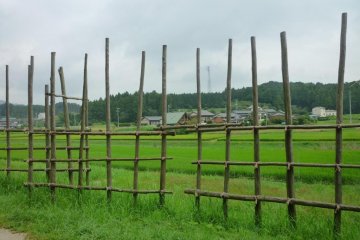