How to eat fish the Akita way

How do I eat this fish? All those tiny bones, I need to make sure that I don’t choke myself!

The people in Akita have a thing going with fish. Being fishermen for thousands of years, they have learnt from trial and errors of eating fish the wrong way round and having to pluck those tiny bones from their 4 year old kids. (Even with all the folk stories about the Namahage terrifying naughty kids, it is still the parents who have to deal with errant fish bones) So after learning it from these masters let me tell you how to eat sanma fish, a speciality in Akita during the Fall Season, Sanma is also known as Pacific saury or Mackerel pike, which can be eaten like sushi or grilled over a charcoal cooker. Akita folk will never be caught dead eating fish out of season, and the three corridor long fresh fish market is testimony to their dedication to freshness. As a matter of fact, there are posters in the fish market showing you what is in season every month.

So here I am, in the Kagura restaurant in the Richmond Hotel building on a Tuesday evening. This week night crowd consists mainly of hotel guests, like businessmen and retired people in their sixties. If you have a party of six, you can easily fit in one of the two private rooms. It is easy to get a table at 6 pm or 7 pm, even a window seat. Bear in mind the window looks out onto the main road if you open the shutters; however there is no road noise, just nice piano bar music being played in the background to a discreet hushed crowd. Actually the peaceful music perfectly complements the décor, which can be described as Sweden meets Japan. Deluxe Ikea paper lantern lights, light beige wood tables with bamboo decorations and white Norens. No bright ukiyo e designs, just simple and easy on the eye. If "Kampai" and "Party" is more your idea of a night out, the Akita Dining Room or the eateries at Kawabata street would be more your scene.

There are several set menus available starting from 2,000 yen per person, however tonight I will try the seasonal speciality, Sanma, or the Pacific Saury. Actually in Japanese the kanji for Sanma is “Fall” and “Knife” so this is perfect for November. Each year, there is a festival in Meguro to kick off the Saury eating season.

As they cook to order to maximize freshness, you will need to wait 20 mins from order to bon appetite or itadakimasu. Not a long time if you are eating in a group, but for a single diner, that is more than enough time to admire the surroundings.

Along with the fish I get to try the pickled vegetables, which are amazingly light but a little tangy and spicy at the same time, combining both a crunchy and soft texture. Likewise the miso soup is lighter and less salty than those in Nagoya or Tokyo. The tofu in the soup is super fresh, almost milky soft, yet holds its shape. Just like the best tofu memories from childhood. The grated radish garnishes accompanying the Sanma is light and without the tartness of that found in some lesser restaurants. The Sanma fish is just right, tender without being sloppy, cooked to perfection on a charcoal grill and just moist enough. The skin is crispy and light and golden brown with a touch of salt, which is all I need. Why mess with nature’s goodness?

So, the moment of truth, how do I eat this fish? First I lightly peel off the skin with a knife or chopstick. Then gently peel off the flesh, make sure you have lemon and salt. When you finished half the fish, you can feel the backbone, and gently lift it off. All the bones should then come off with it. I would also remove the black guts, as it is too bitter for my taste. Then the second half of the fish is easy to eat! All this for around 1000 yen. Healthy and tasty, you can’t go wrong here. 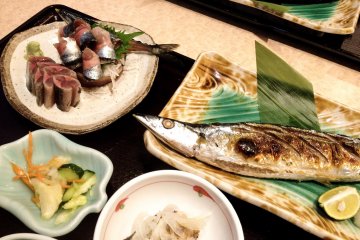 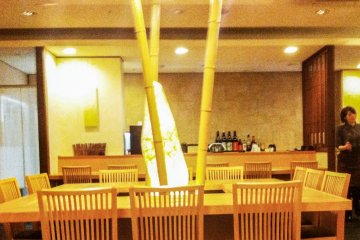 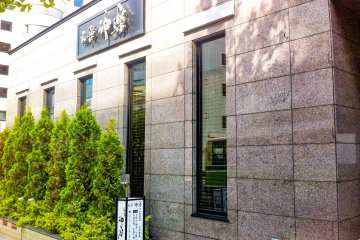