Portable shrines carried across a river to a mountain

Winters in Akita are long with a lot of snow, and many towns and villages take full advantage of this with winter festivals. The Daisen Bonden Festival is another way to celebrate winter.

This festival traces its roots around 160 to 170 years back when the town was mostly agricultural based. Each neighbourhood builds a portable shrine on a pole called bonden. Most portables shrines that I have seen so far in Japan are carried by several people through the neighbourhood to bring prosperity and good health to the area. This shrine is built atop a pole and carried by a single person. Although there are several people in a group, I assume they take turns carrying the heavy shrine on the long route to the mountain top.

Another feature of this festival is that each team is accompanied by a conch horn player. I asked around about them but it seems that nobody knew exactly of the origin. Conch horns are normally used by seafaring people since it's a sea creature, Daisen is about 50 kilometers from the sea. But one thing is for sure, it has a very distinctive sound and is used to gather people or to announce important events or warn of approaching danger. In this case the portable shrine is taken from each district to the Daisen Public Golf course by the Omono River. Before crossing the river, the shrine will be blessed by a Shinto priest. Some offerings of mochi (pounded rice cakes), sweets and mandarin oranges are made to the crowd watching the event. It's important to spread the good luck around to as many people as possible. Catching some mochi or a mandarin orange is said to bring you good luck and good health.

Next each group gets on a small boat and crosses the Omono River to prepare for the ascension of Mount Izu on the other side of the river. The boat is large enough to accommodate two or three groups of about 10-12 people at a time. As the first group slowly crosses the river some fireworks go off in the sky to mark the event. This ritual will take part for about half a day as there are several shrines to take across the river.

After that, the mountain climb starts, some men may prefer more traditional dress style, naked torso, but many will be wearing the fire fighter's uniform as many participants are part of the volunteer fire fighting force. Once at the shrine on Mount Izu (Isusan), the bonden will get another blessing. Depending on snow fall, the ascension might be more dramatic if there is more snow. On the day we were there all trees were covered in fresh snow, it makes for a very beautiful scene.

After the blessing ceremony the bonden are taken apart, the cloth material will be used to make "zabuton" Japanese cushions and some of the wood will be reused while others will be burned.

The festival site is at the Daisen Public Golf course by the Omono river, just off Route 13 where it meets with Route 105. It's also less than a kilometer from the Daisen Station. 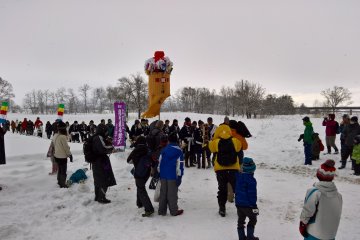 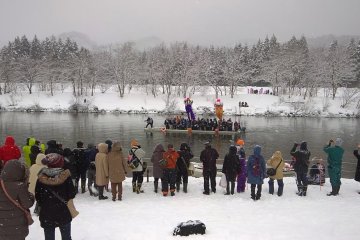 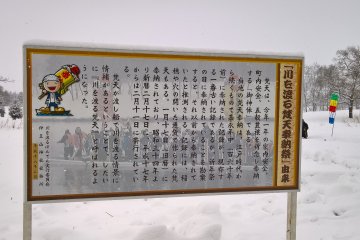 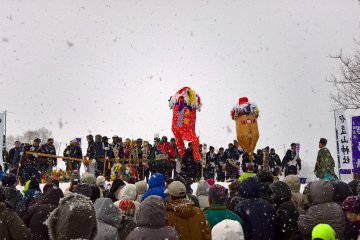 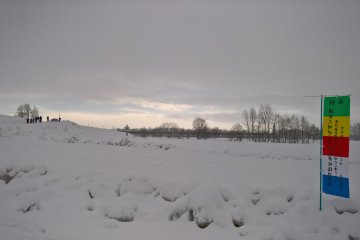 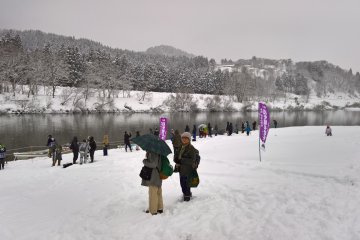 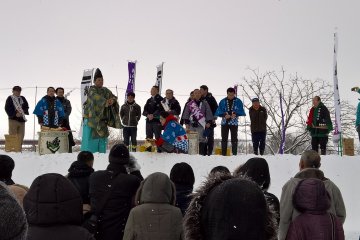 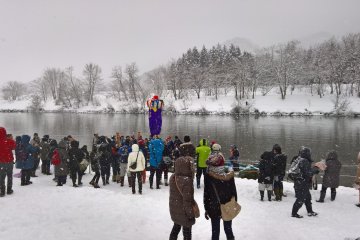 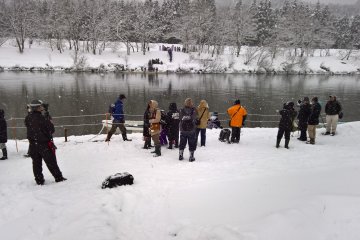 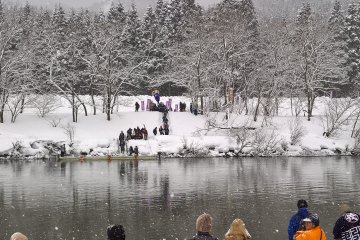 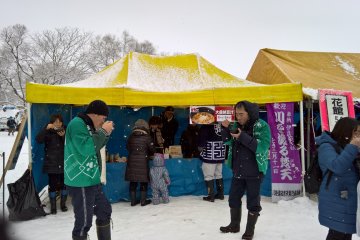 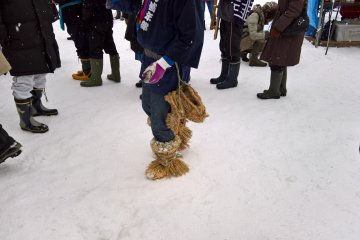 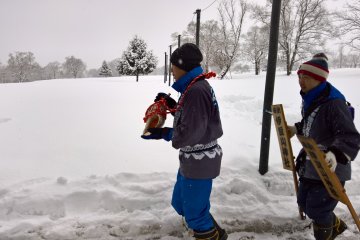