Do you know the anime ‘One Piece’? When you live in Akita, you see a character on buses and local stores that looks vaguely like this straw hat wearing lovable pirate, but something is different. His thick Tohoku accent and love of fishing makes him a memorable character for the rural community he grew up in—but he is not Monkey D. Luffy. It’s Sanpei! The town of Masuda in Yokote is the birthplace of animator Takao Yaguchi. He is the creator and artistic genius behind Sanpei, a local hero of sorts that at least the older generation rallies behind. In order to display Yaguchi’s lifeworks, as well as document the history of anime through other animators’ works and stories, the Masuda Manga Museum and Library was created.

When you arrive in the parking lot, there is an unremarkable big brown building, but what’s inside? You pass through a narrow hallway that opens up into a spacious lobby. Then you realize where you are. On the walls there are manga drawings, a paradise of anime goodies in the gift shop around the corner begs you to hurry through the library to stop by, and there signs pointing towards the various attractions you can enjoy. There will be a main exhibit which is enough to keep you busy for hours if you would like. For the diehard manga fan, there is usually a special exhibit for a few extra coins. From there hang a quick left into the animators’ hallway exhibit.

Your self guided tour of everything manga begins by exploring an animator’s life in detail. See desks, old pictures, and original sketches. The next few rooms are more of the same but just as exciting. In each room there seems to be someone just hanging out reading. Remember, this is also a library! One or two shelves are in these first small rooms, but suddenly the museum opens up into something truly majestic: the main hall.

To call it a hall is an understatement. It’s a manga wonderland! Shelves and shelves of manga comic books line an enormous floor designed to look like a forest. Kids’, adult, and specialty manga are all available free of charge to read. Manga are arranged by series, some popular and some I have never seen. The Masuda museum has made it a personal mission to archive all the manga ever mass published and is doing an excellent job I might add. A magnificent tree structure draws your eye up towards the distant ceiling. Three floors up is your next destination. To get there you walk along a spiral ramp upwards, viewing manga artist photos, bios, and artwork along the way. It was awesome seeing all the unique artistic styles and reading the history of some artists.

The top floor is the last stop before the mandatory gift shop full of miscellaneous manga mementos. It is also the most enjoyable. Original artist sketches and concepts in black and white and color are on display from many manga artists. Some of the artists have left signatures or messages. Manga has a long history in Japan and is a popular piece of pop culture. The Masuda Manga Museum and Library is the perfect destination to brush up on some reading and see how manga has evolved through the decades.

The museum has one drawback of being difficult to get to. While it is easy to find, you’ll need a car and it would be helpful to know some kanji. Your only other option is three stops from Yokote train station plus a 15 minute taxi ride. Once in Yokote, head south down Route 13. Turn left on Musuda's main road and look for the sign. The museum is a big brown building in a large parking lot. Say hi to Sanpei for me! 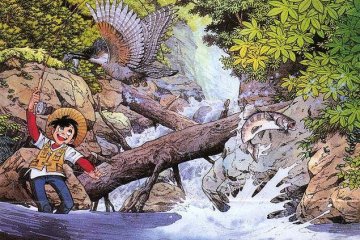 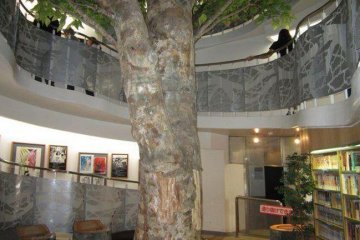 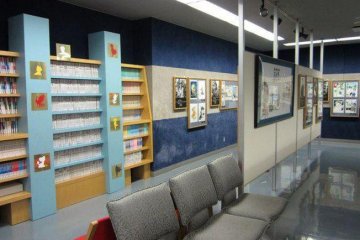 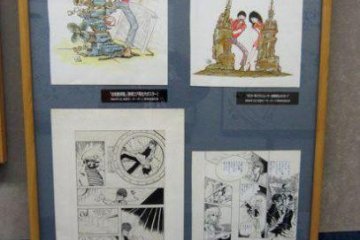