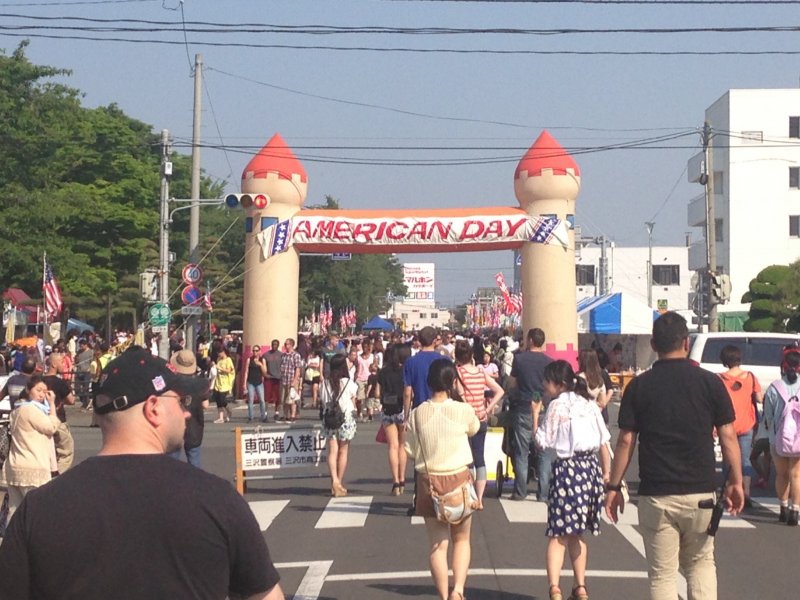 A day dedicated to American Culture in rural Japan

This event has been postponed until autumn 2020.

Whether one hails from the States and misses good ol' American burgers, or if one simply is curious as to how a day can be dedicated to American culture out in rural Japan, American Day is a great way to spend an afternoon. American Day is held annually about a week after Memorial Day, in the town of Misawa, in the northern prefecture of Aomori. It's sponsored by the city's International Club and the nearby American Air Force base, with the festivities leading right up to it's gates.

One can expect an entire day full of food vendors peddling real (as in big and delicious) hamburgers, hot dogs, and other stereotypical but on-the-money American food. The schedule of events differs from year to year but the general flow consists of a marching band type parade in the morning, various games (such as tug-of-war), sports and cooking classes throughout the day, along with a rockin' band playing (2014 had a Van Halen and Bon Jovi cover band!).

Perhaps the most unique thing about the festival is the large number of foreigners present (presuming here that most come from the Air Force base). In northern Japan, it is a rare thing to see non-Japanese people about. On American Day, thousands of foreigners walk around creating a very surreal environment. Of course, many Japanese participate as well, maybe drawn to it by the peculiarity of what American culture maybe, or just wanting to see the rarity of it all. It creates an interesting splice between a small Japanese town and an ex-pat foreign community. In a way, it's almost like an American-themed town one would find in an amusement park, save for the fact that everyone is real.

Misawa has a population of 40,000, so it is a fairly small-sized town. It is surrounded by flat farming land, marshes, and the Pacific Ocean to the east. Summers are hot and humid but nowhere near the likes of Tokyo while the winters are harsh and full of snow. Misawa would most likely be indistinguishable from all other small towns in Aomori if it were not for the presence of the American Air Force. Due to the large foreign community, one can find American food products, albeit expensive, in the supermarkets. There's even a fantastic Mexican restaurant ( Mike's ) located behind the Sky Plaza ( the pinned location on the map).

If you find yourself in Aomori during American Day, though it may not be the "traditional" Japanese culture you are looking to explore, it certainly is a unique "Japanese" celebration of a foreign culture, and it is worth an afternoon.

To get there just follow the pinned location on this article's map. The train station spits you out within a 45 minute walk from the center of town where the festivities are held, and there are of course taxis at the station. If you are driving, make sure you arrive early in the morning as parking will be almost impossible to find near the event towards the afternoon. The main roads in the center of town will be closed most of the day as well. Interesting note on money: you can actually pay with US dollars at many of the food stalls, and even many restaurants in town throughout the year, but make sure you ask before assuming.