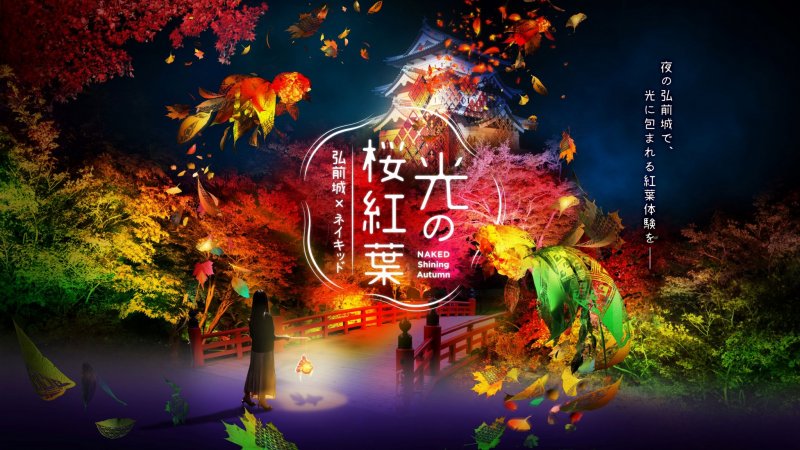 Behold a festival of lights floating through autumn leaves

Hirosaki Castle is closed annually for winter, from November 24th to March 31st.

Imagine a leisurely walk guided by the light of a single floating goldfish lantern as you explore the dusk-lit world of a traditional Japanese castle and the surrounding foliage. The autumn leaves illuminated by a myriad of lights as your little goldfish guides you from one wonder to the next.

If it sounds like something out of a dream, you aren’t far off. The new illumination collaboration between Hirosaki Castle in Aomori Prefecture and Naked is sure to be a vision of loveliness.

Naked is a creative company founded in 1997 by Ryotaro Muramatsu. The group of directors, designers, and writers strive to create new experiences in all aspects of life. This often extends to art, entertainment, culture, education, music, food, and even sports. This time their work has led them to Hirosaki Castle and park.

Hirosaki is a lovely three-story castle tower with fortified moats that was built back in 1611 by the Tsugaru clan. In 1627, the original keep was burned down after being struck by lightning and the present-day model was reconstructed in 1810. Hirosaki Park is noted for being one of Japan’s best cherry blossom spots—but it’s equally charming in autumn.

Hikari no Sakura-Momiji, or “the light of cherry blossom autumn leaves” as it translates, will let visitors to Hirosaki Castle experience the colored leaves in a wholly new way. With projection mapping, light, sound, and scent, your autumn-illumination adventure will lead you into a fantastic world.

You’ll be given a goldfish-shaped lantern that’s designed to guide you along the dark path—and keep you socially distanced from other lantern-holders—as you venture farther into the heart of the park and castle grounds. From projection mapping across the castle walls to a forest pathway with illuminated bubbles floating around you, Naked and Hirosaki Castle will make sure you remember the leaves long after they’ve fallen.

From Chuohirosaki Station to the castle grounds is a 15-minute walk or a 10-minute taxi ride.