I've been to a handful of truly unique places in Japan, among them the atmospheric forest cemetery of Oku-no-in, and the surreal volcanic rock park Oni-oshi-dashi. Put those two elements together and you get Osore-zan, which loosely translates as 'Fear Mountain', a spectrally bleak volcanic landscape where Buddhist statues watch over sulfurous steam vents and a beautiful crater lake.

To get there I took the bus up the mountain from Mutsu, the road taking us round a series of hairpin bends, with thick forest all around. Occasionally at the roadside we saw small, red-bibbed statues of jizo, the Buddhist guardian deity of children, and we stopped at a water-trough to allow some of the more devout passengers to step out for a purifying wash of their hands. Throughout the journey there was Japanese commentary, punctuated at times by the haunting songs of itako​ mediums, and one or two ear-pops as we climbed.

Arriving at the lakeside we were greeted by a couple of demonic-looking statues by a bright arched bridge, which it's said can be crossed only by those who have led good lives. (I made it with no difficulty at all.) The water of the lake was sparklingly clear, but I wouldn't fancy swimming in it, because of the strong odour of sulfur wafting from it; I did see one hardy duck paddling around oblivious to the smell, and a lot of vividly colored dragonflies buzzing and flitting all around.

Near the entrance to the temple there was a restaurant, some vending machines, and a shop selling an odd mix of tacky souvenirs and Buddhist paraphernalia, incense and beads sharing space with hats and rice-spoons. Past the shop at the entrance proper, an imposing row of statues was keeping an eye on visitors, and there were a couple more impressive guardian statues at the inner gate, but the real interest lies beyond the buildings.

The hills and slopes may be lushly forested, and there may be plants and flowers sprouting everywhere, but the grounds beyond the temple still have the air of a wasteland, like an abandoned quarry too treacherous to continue mining, being slowly reclaimed by nature. The dusty ground is stained red and yellow with sulfur, and there are active steam vents which you can hear hissing and bubbling if you lean in close enough. All around there are Buddhist statues, which balance and enhance the atmosphere, adding an element of tranquility; one of them has stains on his face that make him appear to be weeping, though I couldn't tell whether this was by accident or design.

As well as the statues there are signs of Osore-zan's touching role as a gathering-place for the souls of dead children. Scores of colorful pinwheels rotate in the breeze, one for a soul, and there are congregations of tiny statues and small piles of stones everywhere, built by the children as they wait, then knocked over in the night by demons; like most visitors are wont to do, I added stones to some of the piles. As at other temples, there are offerings left to the departed, especially at the rugged foreshore of the lake, where hard blackened outcrops lurch out of the sand; and three times a day there are services, which send the sound of chanting echoing around.

It's possible to stay the night at the temple, but half a day was enough for me to walk slowly round. It's a truly unique place, and I'm not surprised it's seen as a place where the worlds of the dead and living overlap; beautiful, jagged, peaceful, menacing, somber and fascinating, all in one. 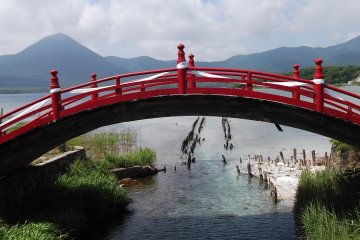 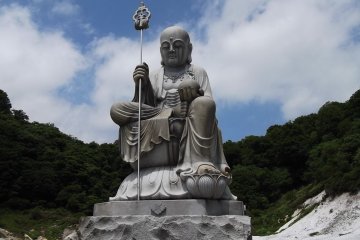 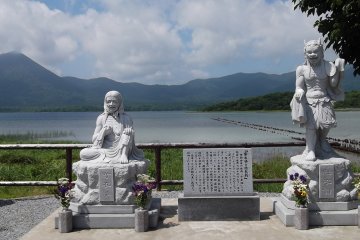 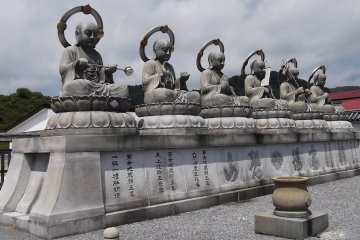 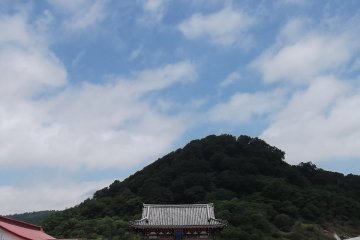 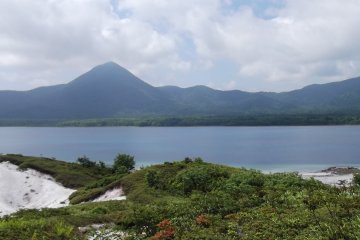 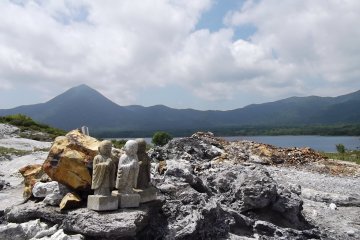 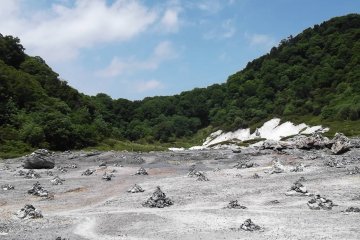 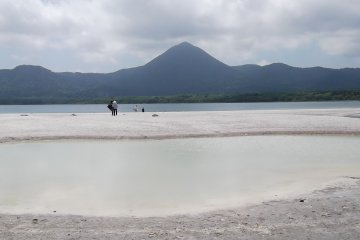 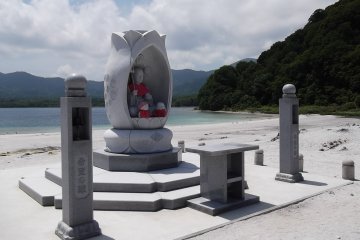 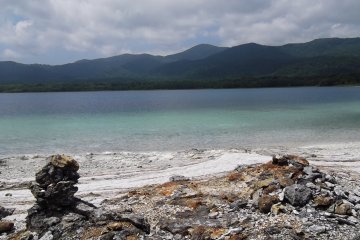 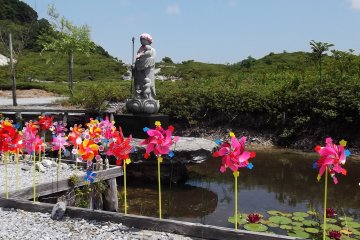 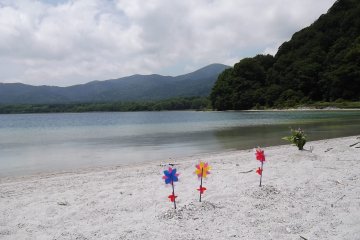