Transportation in Nara made cheap and easy

Getting around a new city can be a challenge, but Nara City’s Gurutto Bus Service makes it easy! There are two color coded routes: the red “Nara Park Route” (奈良公園ルート－nara koen rooto) and the blue “Ruins of Heijokyo Palace Route” (平城宮跡ルート – heijokyo ato rooto). The Nara Park Route serves all the major sites in and around Nara Park including those deep in the park at the foot of Wakakusa and Kasuga Mountains away from the main road, and the Ruins of Heijokyo Palace Route serves the sites closest to the entrance of Nara Park as well as the areas around the Heijokyo Palace Site. Both services only cost ￥100 each time you ride (regular bus services in Nara start at ￥210 and go up from there for certain areas) and have convenient stops at both of Nara’s major train stations and only stop at the most major sites. The red Nara Park Route runs from 9am-5pm every 15 minutes every day, and the blue Ruins of Heijokyo Palace Route runs every 20 minutes from 9am-5:20pm every day. Both services start and terminate at the west exit of JR Nara Station. Fall services run from October 1st through December 31st. 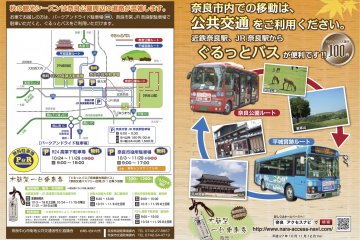 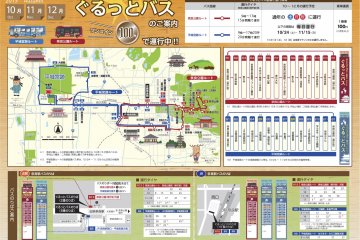