3 of 10 world's highest statues are in Japan, for now

Everyone knows the highest tower in the world is Tokyo's Skytree, but there is a seldom advertised sky-high secret Japan also monopolizes. 3 out of 10 of the Top 10 highest statues in the world are currently in Japan. Each Godzilla-sized statue is actually a gentle giant. Keep a lookout on the horizon for Japan's towering Buddhist deities.

At number 5 and 6, both an equal 100m high are Ushiku Daibutsu (the number one biggest statue when it was first completed) in Ibaraki Prefecture, and the all-white Daikannon of Sendai in Miyagi Prefecture, occasionally giving the top floor windows of the adjacent hotel a surprise scare. Ushiku Daibutsu has an observation deck at 85m while visitors to the Daikannon view the city and distant ocean from a series of windows or pray at the 108 miniature deities inside its body.

Grasping onto the number 10 spot is the Kannon statue in Ashibetsu City, Hokkaido. The Daikannon of Kita no Miyako Park stands an impressive 88m, but its glory days are numbered. India and China are each already building massive statues to be finished in 4-5 years. It seems the bigger they are, the harder they fall. 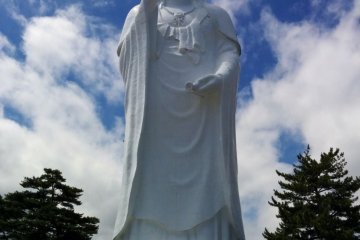