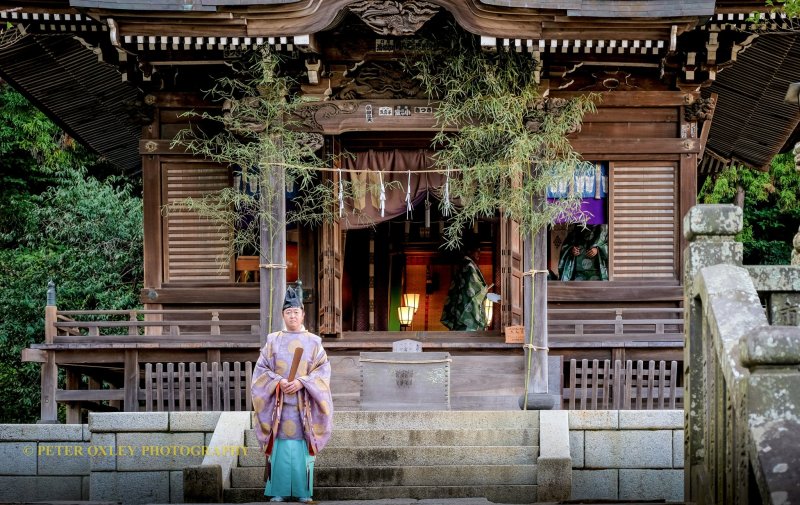 A Picturesque Shrine with a Colorful History and a Masked Parade

Shinto priest in front of the main hall 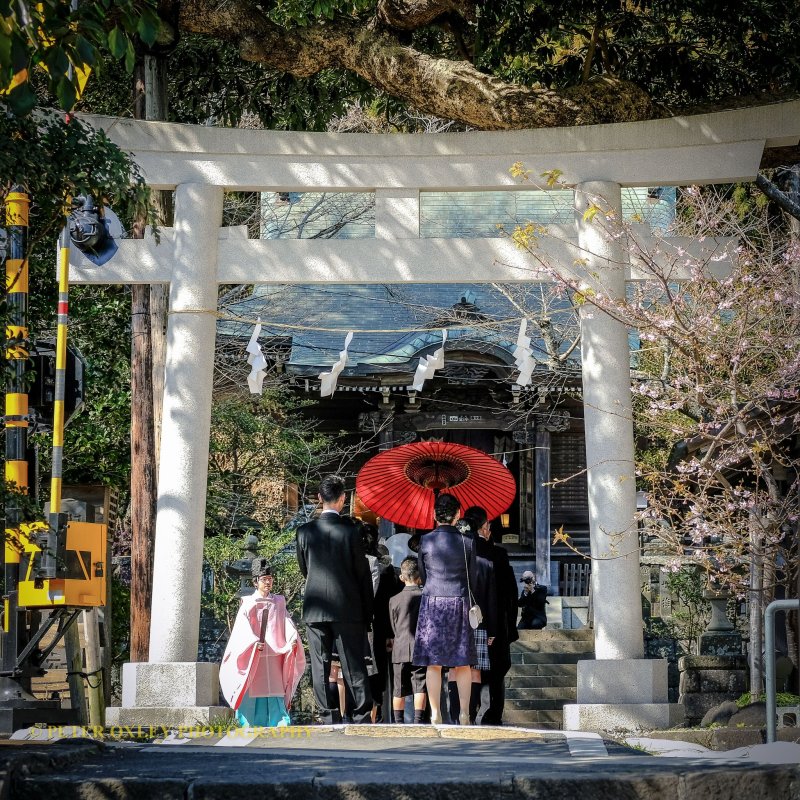 Concrete torii, entrance to the shrine 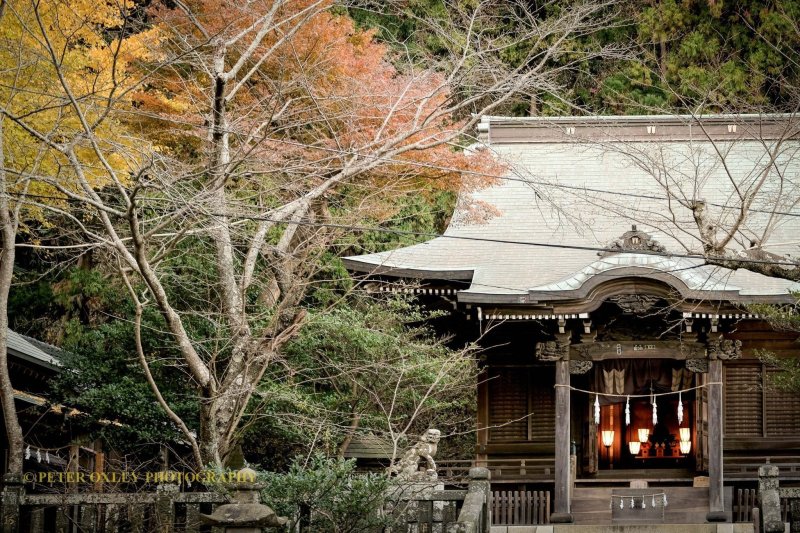 The shrine in autumn 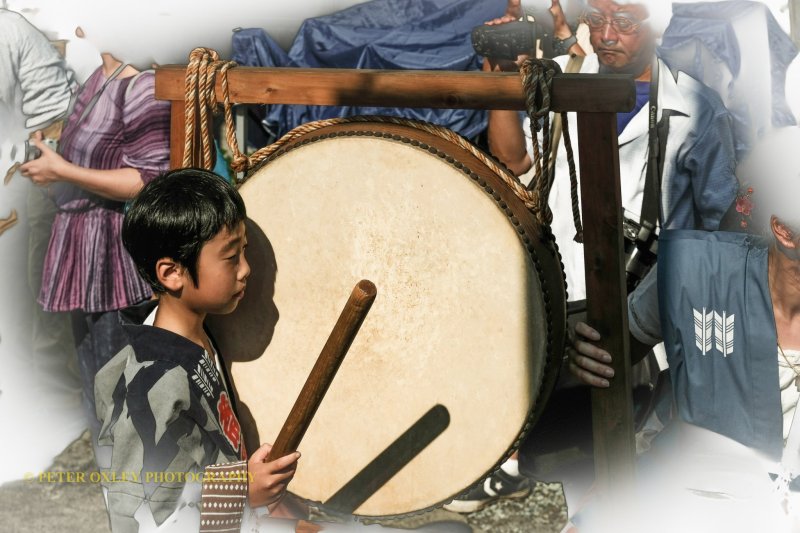 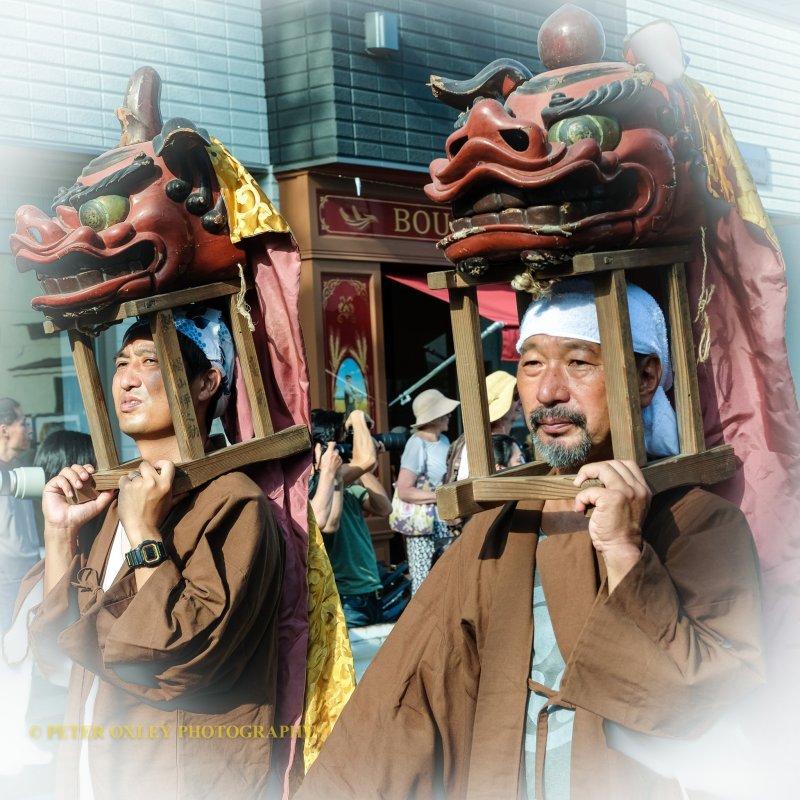 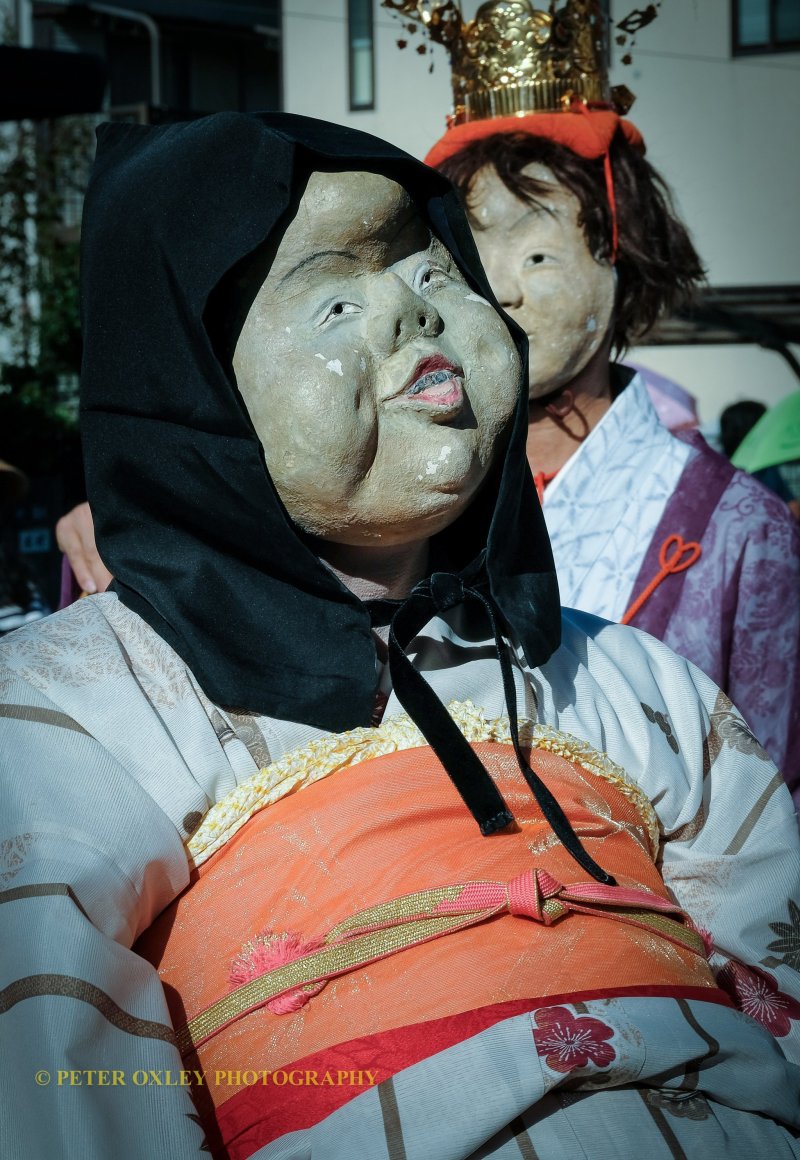 Okame, with midwife in tow 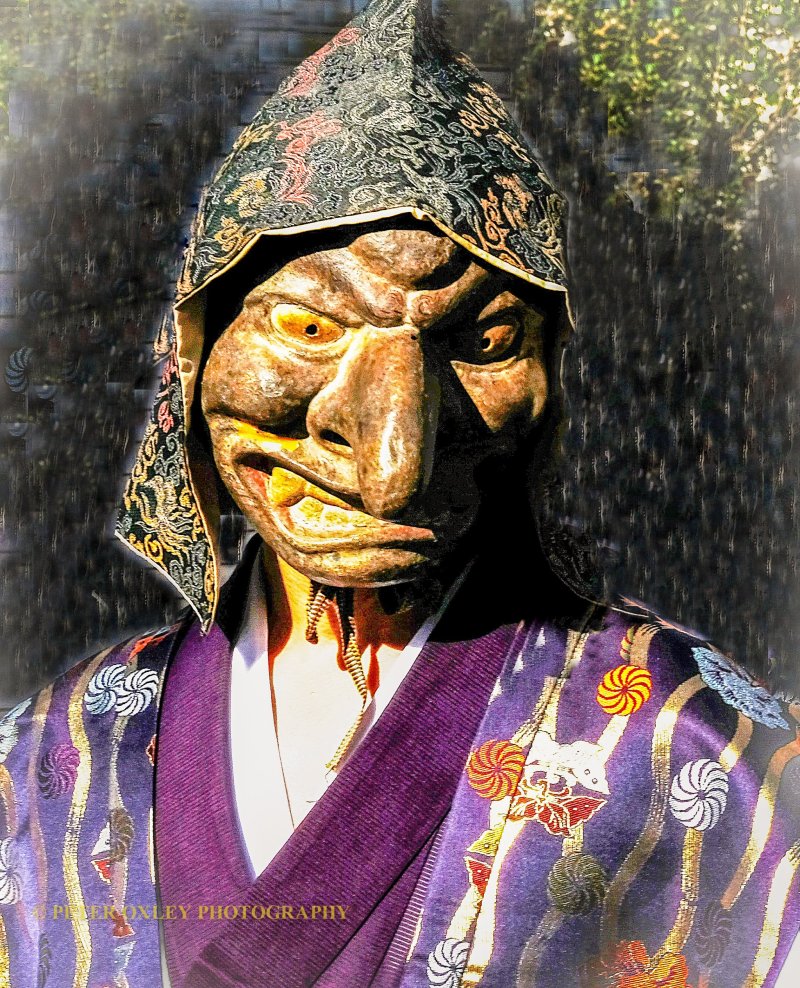 Igyo, a character of monstrous appearance 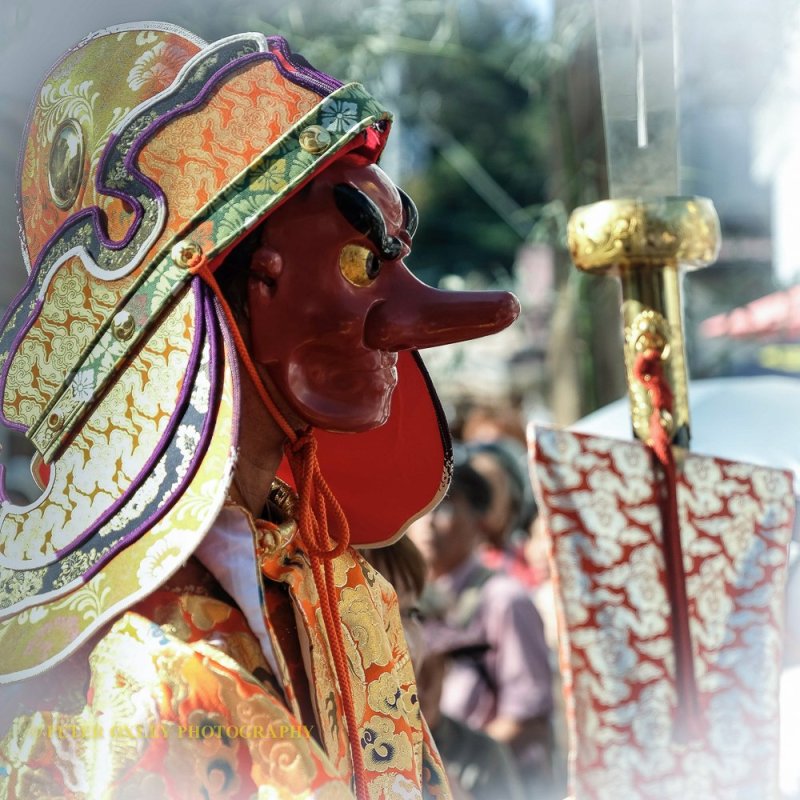 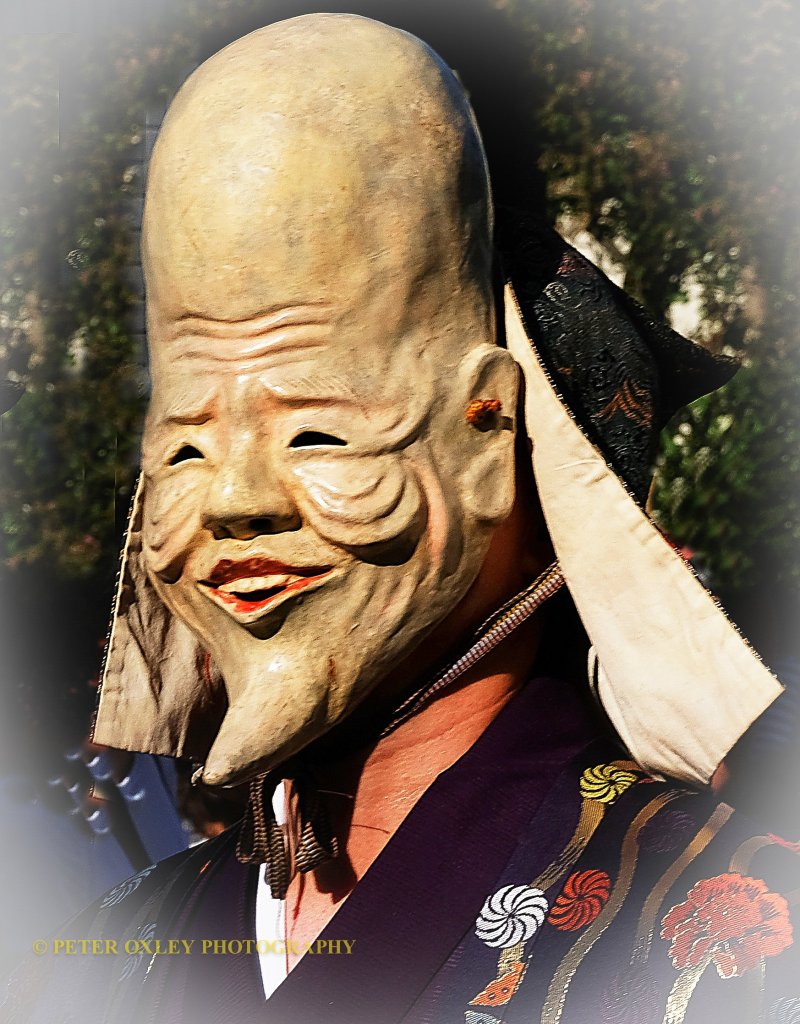 Fukurokuju, one of the Seven Gods of Fortune 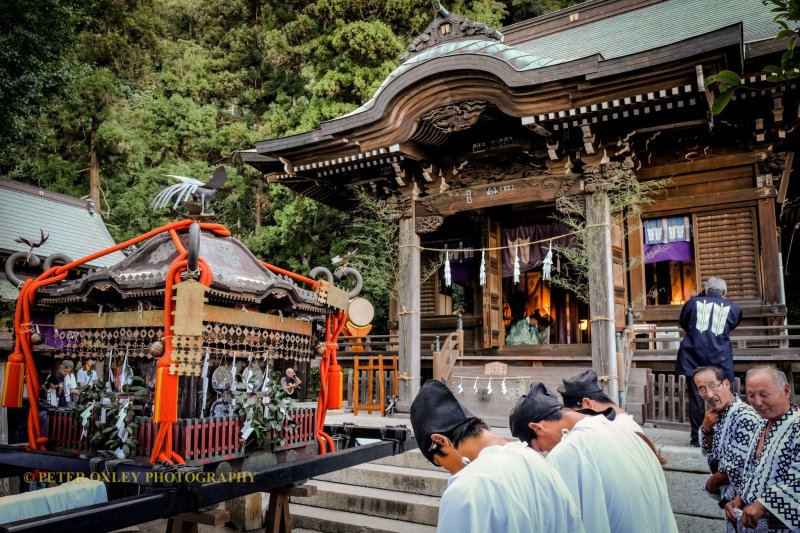 Preparing the mikoshi to take out to the community 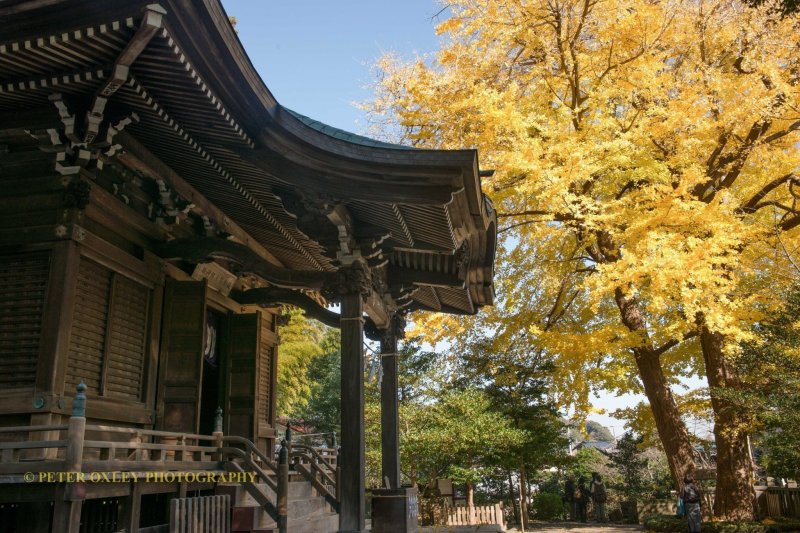 The main hall and the legendary male/female ginkgo tree 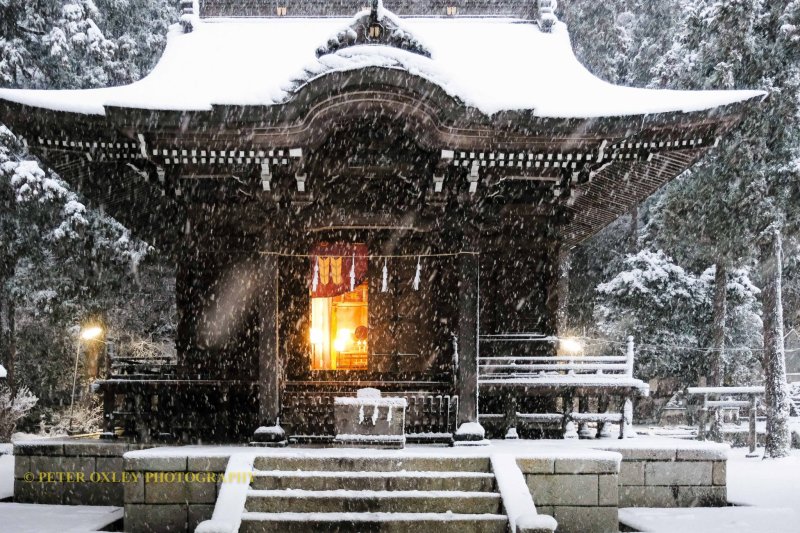 Goryo shrine in a winter snowstorm 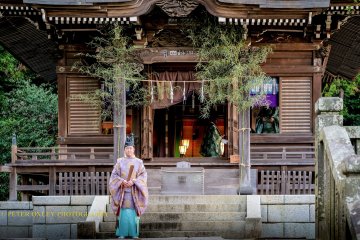 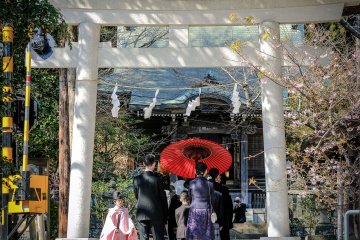 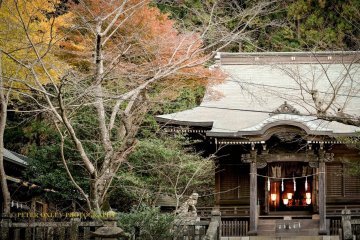 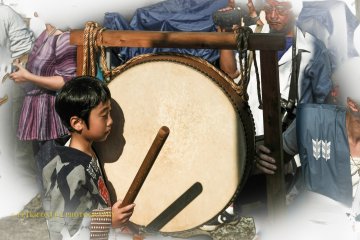 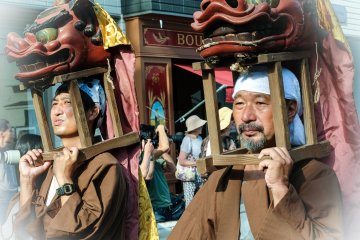 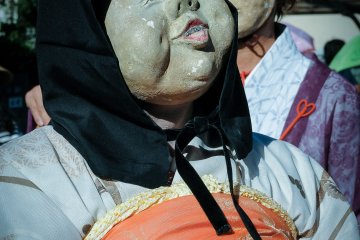 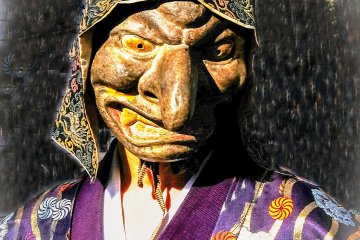 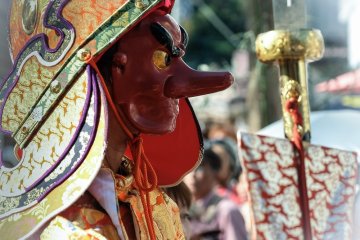 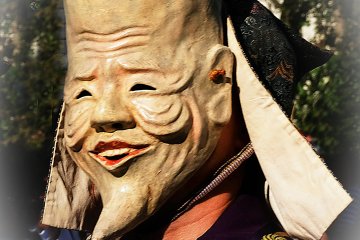 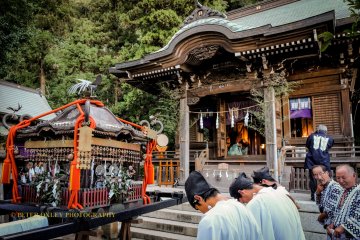 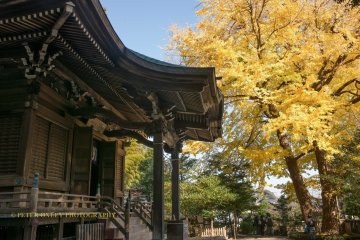 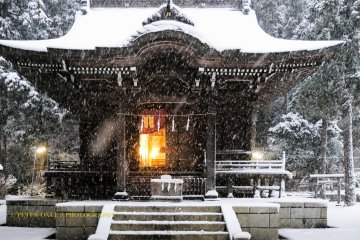 A Rich Legacy of Myth and Legend

One of the many enduring and endearing aspects of Japan’s culture and history is its extraordinary trove of myth and legend. Handed down by word of mouth from generation to generation and through scholarly writings carried out from ancient times in temples, shrines, and academic institutions, this rich legacy helps keep the country's social fabric alive and well. Some of the legends may be embellished here and there, but nonetheless they make up a rich mosaic that grounds daily life in fabled folklore.

One such example is Menkake Gyoretsu, the matsuri (festival) held every September at Goryo (aka Gongoro) Jinja, a small yet highly evocative shrine nestled in a wooded hillside about 100 meters from Hasedera, one of the must-see temples of Kamakura.

An Ancient Shrine Dedicated to a Brave Warrior

Built in the 12th century, before the establishment of the Kamakura shogunate, Goryo Jinja is dedicated to Gongoro Kagemasa, a brave and noble warrior belonging to the Taira clan, who, at the young age of 16, excelled in the Gosannen Wars (1083-1087). Legend has it that in one battle, Gongoro was struck by an arrow in his eye, but despite being severely wounded was able to shoot back and slay his assailant. Declining offers from his retainers to take out the arrow, Gongoro rode gallantly all the way back to Kamakura before consenting to have the arrow removed.

Kagemasa’s bravery and heroism is immortalized in Goryo Jinja’s emblem, a pair of stylized arrow fletchings emblazoned on the shrine’s main hall as well as on the white banners displayed during the annual matsuri and on the samurai helmets and happi coats worn by participants at the parade.

Gongoro Kagemasa died on September 18th, more than 1,000 years ago, but his spirit lives on in the festival celebrated on the same day as his death. After an elaborate ritual performed by Shinto priests to commemorate Kagemasa’s death, a mikoshi is borne in procession around the neighboring community. Boys and girls beat drums and play flutes while men in kimonos hold aloft a pair of fou dogs or lions as the rightful guardians of the shrine and a group of masked participants wend their way behind the mikoshi, dancing and swaying to the lilting music.

Called Menkake Gyoretsu, this centuries-old tradition features performers wearing colorful costumes and symbolic masks in a parade led by Tengu, a popular character with a red face and a long nose, followed by Jii, an old man; Oni, a devil; Igyo a character with a monstrous appearance; Hannanaga, a long-nosed male; Okina, an old man with a noble face; Karasu-Tengu, a crow-faced goblin; Hyottoko, a character with a funny face pouting his lips as if to blow fire; and Fukurokuju, one of the Seven Gods of Good Fortune, specifically of wisdom and longevity. The masks date back to the 18th century.

Bringing up the rear and playing to the crowds is the star of the parade, Okame, a character that represents a pregnant woman, followed closely by an attendant, a midwife who cools her down with a large ornamental fan. They say that should a woman touch Okame’s rounded belly, she will be blessed with a child and easy childbirth. Okame is also said to represent a rich harvest and a good catch of fish.

The Shogun Who Had an Eye for the Ladies

What is the connection between Gongoro Kagemasa and the masked parade? Nobody really knows. But this much is known: Kagemasa took part in the war under the command of Minamoto no Yoshiie, the great-great-grandfather of Minamoto no Yoritomo, the first Kamakura shogun, and that Yoritomo, who was a patron of the shrine during his lifetime, had an eye for the ladies, and in one instance fell in love with a woman of lowly rank, who was only allowed to attend his processions (and see the shogun) as long as she concealed her identity behind a mask, no doubt to escape the wrath of Yoritomo’s jealous wife, Masako.

Popular with Couples Wishing for Children and People with Eye Problems

Today, Goryo Jinja is popular with locals and tourists alike. A towering gingko tree stands guard to the right of the shrine, its two trunks said to represent a man and a woman, or the male and the female elements of the yin-yang duality.

An emblem showing two arrow fletchings adorns the entrance of the main hall above the spot where people come to bow their heads and pray to the gods. This insignia is also prominently displayed throughout the grounds. The shrine is frequented by young couples wishing to have children or praying for a safe delivery, along with people afflicted with eye problems seeking relief from their ailments.

Goryo Jinja is a great place to visit for anybody wishing to enjoy a moment of quiet contemplation. The sense of peace and serenity is palpable, even as daily life goes on around it. The Enoden Line, with its quaint vintage carriages, passes just a few feet away from the torii at the main entrance, a picturesque sight, particularly in the rainy season when both sides of the track are resplendent with the beauty of pink and blue hydrangeas in bloom.

Unfortunately, I am told that for the third year running Menkake Gyoretsu will not take place this year (2022) because of Covid, so please enjoy the photos shown here which were taken in pre-pandemic days. And, do come and visit the shrine next time you are in Kamakura.

Goryo Jinja is a five-minute walk from Hase Station, the third stop on the Enoden Line from Kamakura JR Station.