A Big Steak and Some ‘Honky Tonk’

Chiba bar is a taste of the American Wild, Wild West

I stumbled upon a self-proclaimed honky-tonk bar in Chiba. And, folks, it’s about as honky tonk as you can get in Japan. Steak and Bar Red River (ステーキ＆バー レッド リバー) is located near Chiba City, about an hour from Tokyo by train.

It offers expensive steak cuts, a bit of Tex Mex food, a full bar, seating area and bartenders in cowboy hats and plaid shirts. Next to an American flag, the sign outside reads: “Honky Tonk Bar."

Stepping into the dimly lit spot is a bit of time travel back to the Wild, Wild West. If you’re like me — an American plagued with brief pages of indulgence in the freedom-loving spirit represented by the American West — pop in to enjoy that heritage. Or, go just to see what it’s like. Because the atmosphere seems pretty authentic, and a few of the staff seem to speak English, along with having an English menu.

Stop by to kick up your feet at the bar and order a beer with a shot of whiskey — because that’s a good feeling no matter what country you're in.

What’s more — they serve up bloody mary’s here. It's a cocktail made of tomato juice, vodka, Worcestershire and Tabasco sauces I once thought difficult to find in Japan, but I ended up having two, costing me around ¥1400. They were a little too bland (I like it spicy), but were certainly strong. Red River also has a good enough whiskey collection, notably with Maker’s Mark, Four Roses and Wild Turkey.

And that brings me to the steaks. All things considered, the variety and cut of steaks is decent: tenderloin, rib roast and sirloin. I tried the rib roast steak. It comes with ‘taters and veggies and a delicious garlic sauce. Altogether, it is tasty, however, the steak itself was a little overcooked. Prices for steaks range from about ¥2700 to ¥5000.

To be honest, I wouldn’t come here exclusively for the food. What was most fun was just to sit back at the corner of the bar and listen to the twang of country music. If you’ve never been to the USA, come here for the atmosphere. If you’re an American, especially one from ‘round the honky-tonk parts, stop by to kick up your feet at the bar and order a beer with a shot of whiskey — because that’s a good feeling no matter what country you're in. Giddy up. 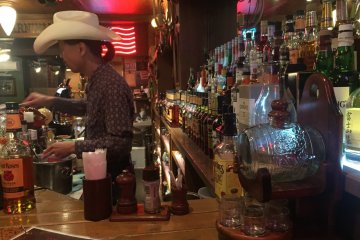 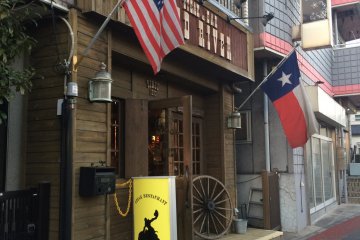 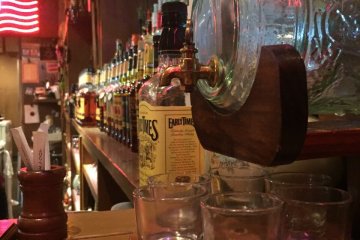 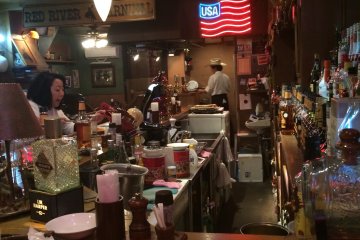 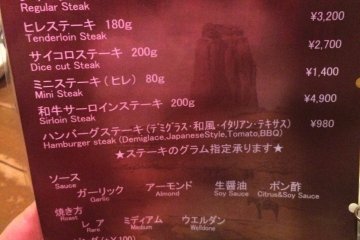