The century-old retreat of a Tokyo scholar

On your way into Tokyo from Narita Airport, you can ride the JR Abiko Line and transfer at Abiko Station for the Joban Line to Tokyo Station. This suburb of greater Tokyo is a quiet bedroom community overlooking a wide marsh, but a century ago, it was the retreat for Tokyo academics, writers, and artists. Two of these villas are open to the public. Take time out to see some of these heritage houses, including Sugimura Sojinkan Memorial Museum, the home of one of Japan’s historians.

Sugimura was born in 1872 into a Wakayama samurai family. During his varied career, he joined the National English Society and took on the position of chief writer for the Wakayama Shimpo newspaper. His long involvement with Buddhism and English scholarship led him to become an English teacher at Honganji Literary Dormitory. There, he wrote for the journal Reflections.

Later, he became an interpreter at the American legation in Japan. He was scouted by the Tokyo Asahi Shimbun in 1903. Sugimura's prolific writing includes translations of texts of foreign correspondents, Lev Tolstoy's work, and even a popular novel while he was on assignment in England.

On his return to Japan in 1911, he applied himself to reforming newspapers, bringing western ways of archiving and editing to the media industry in Japan. In the 1910s and 1920s, he researched media studies and helped establish the Graduate School of Journalism at Chuo University.

The Great Kanto Earthquake of 1923 would alter the landscape of Tokyo and Sugimura’s life and work. The disaster claimed the lives of two of his children, spurring him to move out of the city to his villa overlooking the lake in Abiko City. The estate he called Hakuba-jo – White Horse Castle – is the site of Kotan-an, the residence where he wrote an influential collection of essays, Kohan Gin, and organized a haiku society for local poets.

Today, the estate is the Sugimura Sojinkan Memorial Museum with a collection of structures on the hilly property. The original house and later two-story addition were designed by maverick architect Kikutaro Shimoda. You might not recognize his name, but you have likely seen his work. Shimoda developed the hybrid classical and Japanese architectural style seen at the Tokyo National Museum and JR Nara Station. The Abiko buildings have distinct exteriors that blend western and Japanese sensibilities.

The garden with tea houses, pavilions, and ponds is filled with Sugimura’s favorite flower, the camelia. The seasonal plantings are periodically the backdrop for sculpture installations.

Sugimura's writings about the district around Teganuma Marsh attracted the attention of other intellectuals who took up residence along the lakeside. Take your time at this Abiko landmark to experience the charm of the city. To round out your visit, see nearby Murakawa Villa, the site of judo master Jigoro Kano's villa, and take a bike ride around Teganuma Marsh. 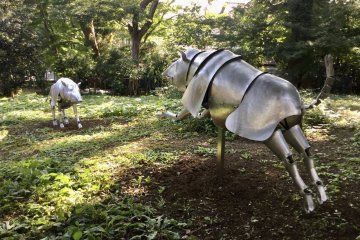 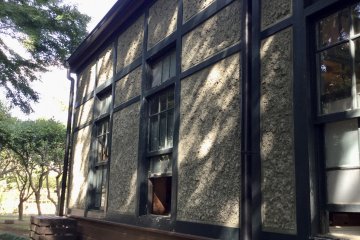