See the past and present of handmade Tobe-yaki pottery

To most Japanese people, Tobe calls to mind Tobe-yaki, a type of ceramic known throughout Japan. People tend to imagine Tobe as a picturesque, arty sort of town, visibly full of potter’s ateliers, known as kama meaning ‘kiln’. Actually, it’s rather a nondescript place, a suburb of Matsuyama strung out along an uninteresting stretch of road. But once you get off the main road and dig around in the side roads, you can find the kilns and ateliers. And you can actually go in some of them, and see the potters at work.

One of these places is the Baizan-Gama Pottery which can be found at the end of a narrow road that winds up into the foothills of the mountains of Tobe. I visited Baizan-Gama with a group and was taken on a little tour of the premises. The first stop was behind the current workshop to look at the old unused noborigama or ‘climbing kiln’. Originally, Japanese pottery kilns were built on steep slopes to take advantage of the fact that heat rises. They were built of large, heat-resistant bricks that expand when hot. Since there were no sensors for high temperatures in those days, the kilns had little round holes in their domed roofs so that the potters could judge from the color and other characteristics of the flame how hot things were and how the pots might be doing inside. You can go inside the kiln and see how the various dishes and cups were stacked, and also touch the brown, shiny glaze that formed on the bricks through many years of use. There are some examples of tableware from early last century on display inside. The gentleman from Baizan-Gama who showed us the kiln was clearly in his element, pointing out this detail and that with infectious enthusiasm.

Next up was the modern workshop, a huge hangar-like building with a row of little workstations around the periphery by the windows, and racks of every kind of pottery in the middle, arranged on planks, which workers deftly carry around balanced on one hand. Some of the people at the workstations are professionals, mass producing tableware by hand. Others are amateurs who are using the facilities to pursue their hobby. At the back of the workshop is a row of gas-fired kilns with little railway lines leading into them for the fire-proof carriages loaded with unfired clay. You can watch every step of production, and the workers ignore you as if you weren’t there, so can you really stare long and hard if you want to. But if curiosity gets the better and you do hazard a question, they respond graciously.

There’s also a small museum of Tobe-yaki work through the ages with some very attractive examples. Naturally enough there’s a shop too, quite large, selling everything from cheap, rugged tableware, to exquisitely fine tea bowls, sake cups, and vases, commensurately priced of course.

Family-sized groups are free to turn up and look around at no charge without a reservation. Larger groups are asked to call ahead to make a reservation. If you’re in Tobe, it’s worth the effort to get off the beaten track a little to see the past and present of handmade ceramics at Baizan. 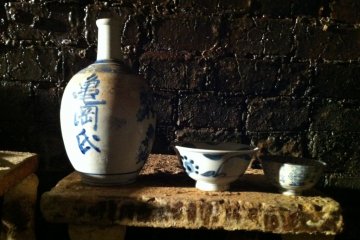 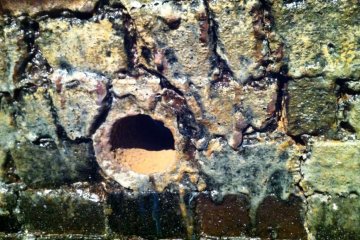 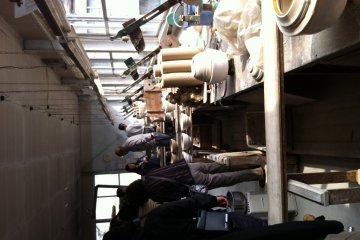 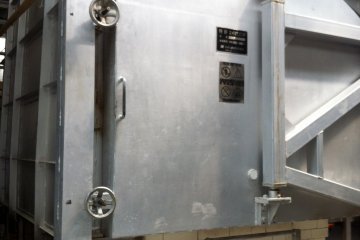 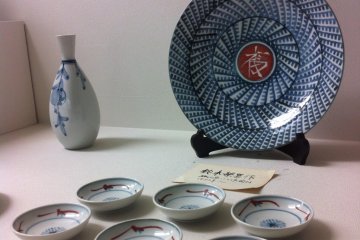