A cathedral of martial arts

Entering Matsuyama from the southwest, as you cross the bridge over the Ishite River you’re likely to see a striking large wooden building featuring a mass of cross-linked beams. This is the Ehime Prefectural Budokan, home to Ehime’s martial arts community.

The base of the building looks like castle walls with huge, rough-hewn granite stones, and a superstructure reminiscent of a temple or meeting house. It boasts the largest gable roof in Japan, covered with 320,000 tiles from nearby Kikuma, the center of Ehime’s tile industry. The design called for the use of vast quantities of wood to demonstrate the feasibility of building large structures with renewable materials and to stimulate local forestry. Indeed, supplying materials for the building resulted in a considerable boost to the local economy. Five months after completion of the facility, the number of visitors increased nearly six fold. Twenty major events have been held here, including one international athletic competition and a visit from the Dalai Lama.

The main dojo area can accommodate eight judo and kendo areas. The buildings also host various other sports, concerts and events. Three thousand seats are permanently installed, and with the addition of temporary seating, it has a maximum capacity of 6,500.

If the building itself inspires awe, consider for a moment the community that it supports. Chancing to find myself in the area one Sunday, I was drawn in by a desire to see this forest of wood from the inside. In one of the smaller rooms, which was still a very large space, hundreds of kendo practitioners were going through an exam in swordsmanship. In pairs, the candidates demonstrated their techniques in front of a long table of judges, while their fellow swordsmen sat in a huge silent group on the floor. Each technique starts from complete stillness, followed by a blur of rapid motion. The echo of a shout and stamping foot lingers in the air long after the action is finished.

At first glance, the kendo people look like an undifferentiated mass as they’re all wearing the same dark blue cotton clothes. But in fact they’re male and female, old and young, intermingled in what looks like a very comfortable manner. As they all made their way, wooden swords in hand, to the middle of the floor to hear the closing remarks of the judges, a boy of about ten noticed me, stopped, bowed and carried on his way, all in a few seconds. I have rarely been so moved by a brief acknowledgment.

After the exam, the kendo people streamed down the stairs and began sheathing their swords for the trip home. In the spacious lobby overlooking a huge tile demon, there was a good deal of impromptu fencing going on. I watched a punky-looking teen with spiky hair teasing his girlfriend with mock sword attacks. A practitioner herself, she didn’t seem to mind.

If you’re in the area, the building itself is worth a look. But if you can arrange to visit when an event is being held, you’re certain to witness an exciting interaction between an active community and the cathedral of sports that they built themselves. 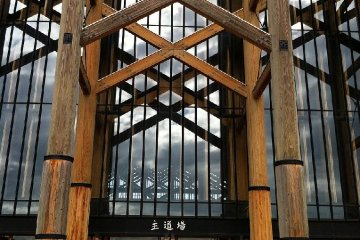 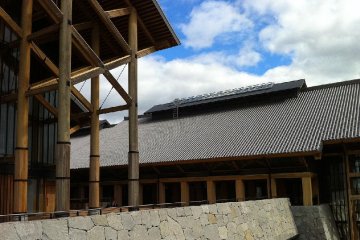 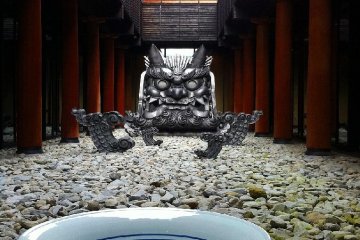 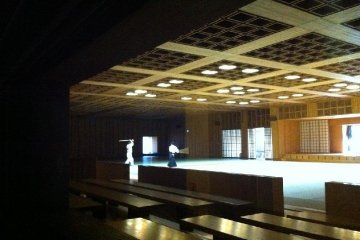