Or more precisely, edutainment, with magic thrown in

Kamishibai, literally “paper drama”, is a uniquely Japanese form of storytelling. Buddhist monks developed it in monasteries during the 12th century, using picture scrolls to impart morality tales to audiences who generally couldn’t read. In the early 20th century, kamishibai enjoyed a revival as a popular entertainment. Instead of scrolls, boards painted with scenes and characters from the story are inserted into a wooden frame somewhat resembling a theater (or a television). As the story progresses, the storyteller or kamishibaiya pulls out one board after another to reveal the next. The kamishibaiya would bicycle from town to town with their equipment strapped behind the saddle and perform their shows for small change.

Now another revival is underway, celebrating ‘analog’ participatory entertainment and the slow way of doing things. In Dogo and other places around Matsuyama, you can enjoy kamishibai performances by Go Kajiwara and his team of troubadours.

The players arrive, pushing their bicycle-mounted theater and drawing a lot of attention to themselves. They have voices that carry, and they’re shouting “Gather round! The kamishibai is about to start!”. Since this is not something you often hear, it creates a stir, and soon people are hovering around looking curious. A smiling attendant graciously urges them to take a seat on a bench, and offers them a folded red blanket to keep their legs warm.

Before the kamishibai show starts, Kajiwara does a little magic show to warm up the audience. As far as magic goes, it wouldn’t win any prizes on a television talent show, but it was mighty entertaining nonetheless. Mikan oranges are one of the key products of Ehime, and Kajiwara hands an ‘invisible’ one to a member of the audience, inviting them to throw it to him. He ‘catches’ it in an ordinary plastic bag, and the bag makes a very convincing ‘orange entering a bag’ noise. Kajiwara offers to sell the bag for a very high price.

The story that I heard was about the friendship between haiku poet Shiki Masaoka and Saneyuki Akiyama, two well-known Matsuyama personages from the Meiji period. Shiki was not a handsome chap and he’s exquisitely pale and ugly in the hand-painted pictures — “your typical bullying victim” as the performers confide. The story is told very energetically by two performers who engage the audience with great skill and good humor. Kajiwara uses two wooden clappers to punctuate the story (and catch the attention of passers-by).

This is excellent entertainment, and it costs nothing. If you hear a racket in Dogo, make haste towards it, because it’s probably Kajiwara & Co. It doesn’t matter if you don’t understand Japanese, they’ll make you laugh anyway. And laughing is good. 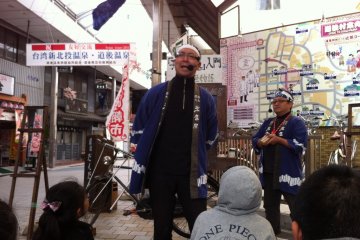 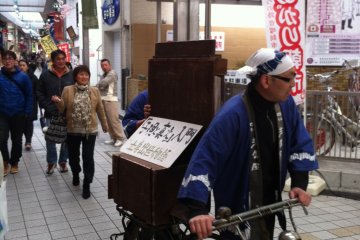 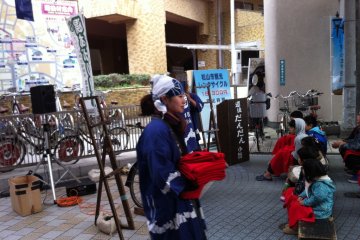 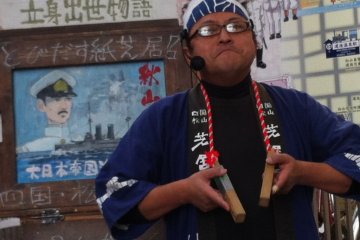 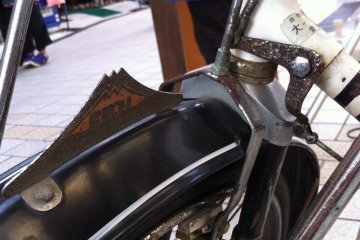 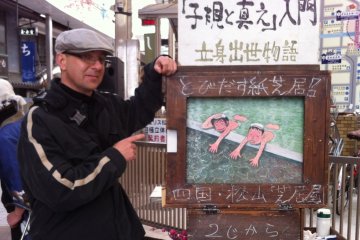