The history of the Kono clan in Dogo Park

Today Dogo Park is a peaceful place where families go to relax and play on the weekend. But it used to be the site of a castle where bitter battles were fought. The nearby Ishite River is said to have flowed red with blood for three days after one battle.

The museum comprises three buildings built with methods used in the 16th century. In fact, this method isn’t much different from what was used until very recently. One building shows a scene of high ranking samurai playing at writing and reciting linked verses while a servant prepares a meal. Another building has exhibits of rusty but evocative bits of armour and presentations of medieval Japanese construction methods, with tools, contemporary manga-like illustrations, and models. The largest building is a little museum about the Kono clan which ruled Matsuyama for four generations. Their insignia is a circle or hexagon enclosing three wavy horizontal bars, and this insignia can be seen on nearly every temple and shrine in the region.

The Kono clan originated to the north of Matsuyama in Kazahaya-gun, which later became Hojo City. They formed a navy called the Kono Suigun which dominated the Seto Inland Sea in the northern Iyo region, originally as pirates, and later as a sort of coast guard. Eventually, in the late 1300s, the Kono moved their base from Kazahaya to the more strategically advantageous Yuzuki Castle (湯築城跡, yuzukijō ato), the site of today’s Dogo Park. The last heir of the Kono clan surrendered the castle to Toyotomi Hideyoshi in 1585 when Toyotomi added Shikoku to his conquest of the whole country.

The museum has a realistic model of the park as it is now, with a dinky little viewer that superimposes a ‘historical’ video on the diorama. Another video in the room next door presents the history of the Kono with scenes of a chap in samurai armour with a dramatic voiceover in Japanese. Glass cases around the walls display the pottery cooking equipment and crockery that was discovered on the site, some of which looks very much like the Tobe-yaki ceramics popular today.

Although you have to take your shoes off to see this part of the museum, it’s worth the effort. The final part of the museum is beyond the little garden, built into the outer earthwork itself, where you can see an excavation of the rampart in cross section. 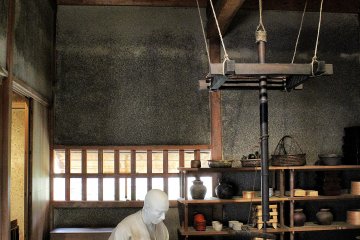 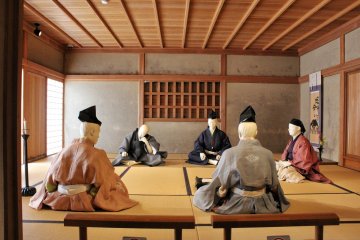 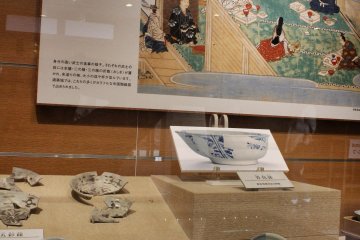 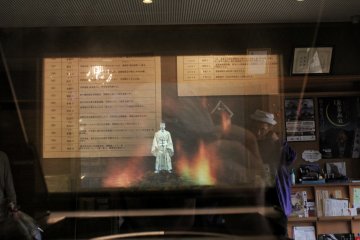 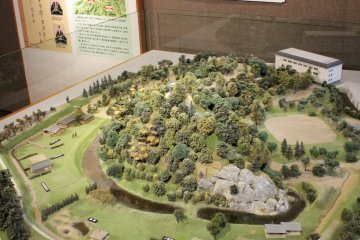