One of the most attractive shrines I’ve ever seen

Futami in Iyo is known for its beach and its sunsets. Most people visiting Futami won’t even be aware of Mishima Shrine, which clings to the mountainside a short distance to the southwest of the Road Station at Futami. This is unfortunate, because Mishima Shrine is one of the most memorable of the many beautiful Shinto shrines I’ve visited, ever.

Route 378 hugs the coastline of the Seto Inland Sea, and somewhat above it runs the railway line. As I was heading northwards, I happened to notice a decorative wooden gateway above the railway tracks. I pulled across the road and parked in a little lay-by close to a stone torii gate. A seemingly endless flight of mottled stone steps rose up the hillside, passing under the railway. I climbed the steps, pausing frequently to look back down and out over the azure sea.

Soon I reached the wooden gateway. A middle-aged couple passing through it were as surprised to see me as I was them. They were holding hands, which is not something you see very often in Japan. Perhaps it was the romance of the place that was having an effect, or maybe the place just attracts romantic people. The gateway itself is carved with the most vivid wooden reliefs of fruit, water, flowers and wild animals.

Beyond the gateway is yet another long flight of steps, which passes between some stone lanterns, and a forest of enormously tall and characterful trees. Adding to the atmosphere of natural riot was the sound of a woodpecker pecking wood. Taking care not to lose my balance and fall down the stairs, I gazed upwards and soon saw the little fellow at work. Japanese woodpeckers are smaller and less visually conspicuous than the European variety, but it’s still a treat to see one. They don’t mind being watched.

The shrine itself stands in a large clearing. In front of it are a pair of grotesque and ferocious-looking stone turtles, with long tails that stick up at the back. These may be products of the same hand that carved the vivid shishi lions which guard the entrance to the shrine, the like of which I’ve never seen before. I was particularly taken by the circular motifs on the roof of the shrine. They have a metallic look, but I’m sure they’re ceramic.

Everything about Mishima Shrine and its setting charmed me completely, and next time I go to Futami, I intend to take a picnic with me and enjoy it in the seclusion of the shrine. 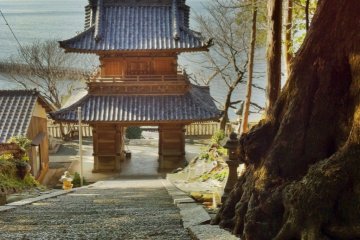 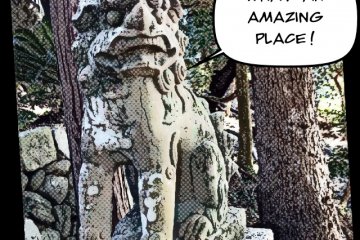 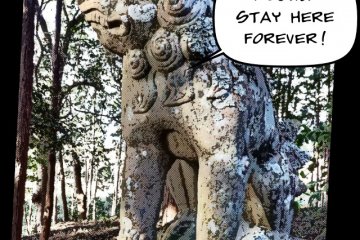 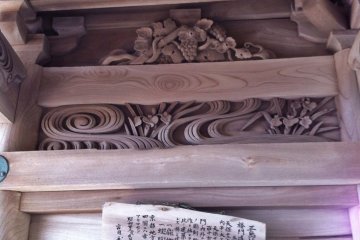 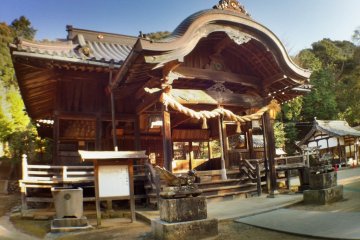