Temple No. 55 of the Shikoku 88 temple pilgrimage

Nankobo is Temple No. 55 of the Shikoku 88 temple pilgrimage. It’s the only temple of the 88 to be called “bo” instead of the typical “ji”. “Bo” means “small Buddhist temple”, which is ironic because Nankobo is one of the biggest of the 88. It’s very much a city temple, located right in the center of Imabari fronting a main road. It stands in what is in effect a religious agglomeration, a complex of sandy plazas dotted with temple and shrine buildings that stretches for three city blocks. Next to Nankobo is the Bekku Oyamazumi Shrine, also worth a visit. Nankobo is a very interesting sprawl, with cars and buses parked in the middle.

Although it isn’t immediately obvious, the Hondo or main temple building of Nankobo is made of concrete. The original building was destroyed in the bombing of Imabari during WWII. The wooden gate at the entrance to the temple is of recent construction too, although its style is old. The Nio or temple guardians housed in the gate, front and back, are magnificently ferocious and expressive with their chocolaty-looking wood and gilt highlights. If you want to photograph these scary lads, be careful not to fall in the carp pond as you frame your shot.

Every temple on Shikoku’s pilgrimage route has a building called the Daishi-do to venerate Kobo Daishi, the founder of the pilgrimage. The one at Nankobo looks simultaneously old and new—so which is it? In fact it was built in 1916, hence the antique look of its timbers, but it was substantially restored in 2010, which is why its tiles, with their rather bombastic decorations, look so new.

Nankobo is one of six pilgrimage temples located relatively close together in Imabari. The others are Eifuku-ji, Enmei-ji, Senyu-ji, Kokubun-ji, and Taisan-ji. If you choose to visit several of these on a weekend, you’ll probably see some of the same people at each temple because they will be doing exactly the same thing as you. The “Hello again!” thing tends to become something of a running joke.

The whole area around Nankobo merits a leisurely stroll. There are attractive shrines to the left and right of the temple, and behind it there’s a neighborhood of largely one-storey traditional dwellings with leafy gardens. 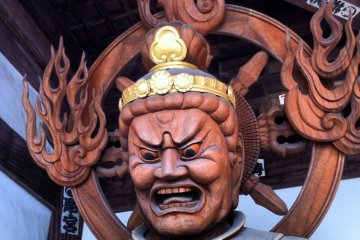 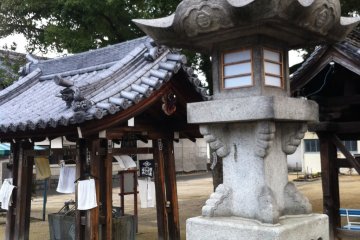 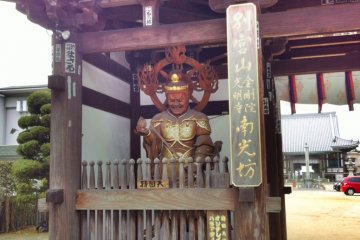 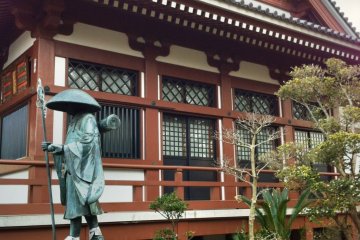