Lots of attractions on the ‘Big Island’ near Imabari

The Seto Inland Sea separates the island of Shikoku from Honshu, the main island of Japan, and from Kyushu. A chain of islands dots the sea between Imabari in Ehime, and Onomichi in Hiroshima, and this route is linked by the Shimanami Kaido, an expressway with spectacular suspension bridges over the sea passages.

The first major island on the Ehime side is Oshima—‘Big Island’—although as islands go, it’s quite small. In early April, I rented a bicycle and headed off over the bridges spanning the Kurushima Channel to explore Oshima. I got off the highway and took the looping ramp, down to an attractive beach with a fine view of the bridge above me.

My first stop was at the Iki-ikikan Michi-no-Eki just next to the Kurushima Channel. Although I was tempted by the fish BBQ on offer here, it was a bit early for lunch, so I had a sweet snack instead as I admired the bay with the bridge disappearing into the distance. After getting an excellent map and some advice from the lady in the souvenir shop, I headed for the Murakami Suigun Museum on the other side of the island.

Oshima is quite mountainous with several steeply sloping peaks. The road through the valley isn’t exactly flat either, although I did manage to cycle it on my shopping bike. I passed through scenes of rice paddy, shrines, temples, and cherry blossom. The island is a source of high-quality stone for building and statuary, and parts of the mountains have been cut away in quarries. There’s even a Stone Culture park in the middle of the island.

There are numerous places to eat on Oshima. At lunchtime, I found myself in front of the little restaurant Sadame where I had a very pleasant meal of fresh seafood on a bowl of rice. Other options for meals are the restaurant and BBQ at the Michi-no-Eki, and the cafeteria in the Murakami Suigun Museum.

On the west side of the island is the Rose Garden which boasts 400 varieties. These are best viewed from June to late autumn. Next to the garden is the Yoshiumi Local Culture Center with its fascinating museum of armor, weapons and daily life going back two centuries.

Oshima is also home to the I-S Shipyard, a more interesting and visually appealing place than you might think. It stands at the end of a beautiful sandy beach where local people gather seaweed to eat. From the island, you can see the spectacular eddies and whirlpools caused by the peculiar tides in the Inland Sea. 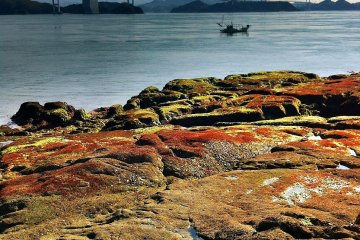 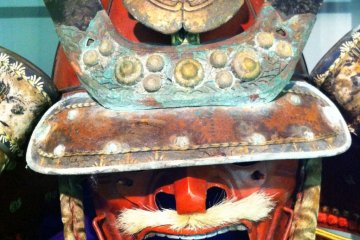 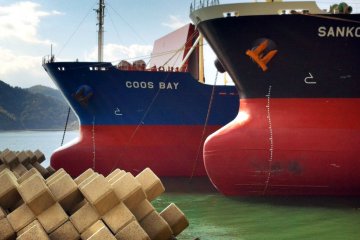 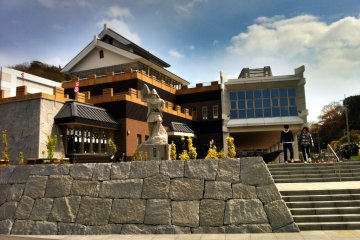 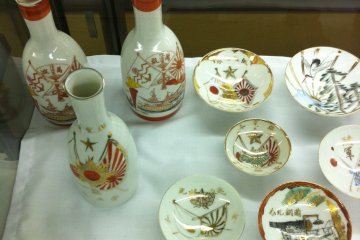 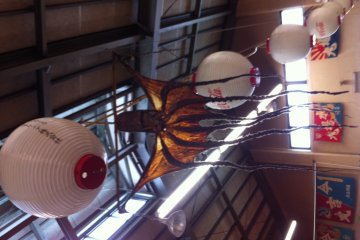