An ancient shrine revered by warriors of old

One of the surprising things about Shinto shrines is that some of the most important shrines are in out of the way places. Oyamazumi Shrine is one of these. Located on Omishima Island in the middle of the Seto Inland Sea, Oyamazumi Shrine was hardly accessible until the Shimanami Kaido highway was completed in 1999. Notwithstanding its remote location, the shrine has been a centre of worship for soldiers and sailors from across Japan from ancient times.

The entrance to the shrine is fairly typical, with a stone torii and lion dogs. Beyond these is a new but fully traditional wooden gate building. The shrine guardians signal the martial nature of the shrine—they’re two gentlemen in armour, one waving a sword, the other holding a bow and arrow. Adjacent to the gate is a pretty rice field enclosed by a colonnade, with its own shrine building. Here, a rice planting festival is held in June, followed by a sumo match between the god of the shrine and a mortal. You can’t actually see the god, so it looks a lot like a one-man sumo match, but the god always wins.

Inside the main gate is a long, sandy plaza with several subsidiary buildings on one side, and woods on the other. It’s a dramatic and impressive space, especially since some of the trees are clearly of great antiquity. There are around 200 camphor trees in the grounds, but two are especially old. One of them dates back 3,000 years, and the other 2,600 years, and it shows. I went in mid-summer when the sun was beating down, and cicadas made a racket with their buzzing and tweeting. The old trees provided welcoming and comforting shade.

As I made my way deeper into the shrine, I was gradually overcome with a feeling of awe at its age and beauty. It seems to be a natural cathedral that goes deeper and deeper towards some secret. When at last you get to the main shrine enclosure after the fascinating trek through the long approach, another tempting looking path branches off to the right. I overheard a young man with dyed blonde hair exclaim to his girlfriend “Woh! There’s more over there!”, with a mixture of surprise and dismay—dismay because you really never know where to go first. That particular route goes up some ancient stone steps that are sprouting trees to the Treasure House containing armour and weapons. Military leaders would pray for victory at Oyamazumi, and if they met with success, they deposited their arms as tribute to the gods. Today, the Treasure House holds 80% of the items listed as cultural and national treasures listed in Japan. You can enter the Treasure House for 1,000 yen.

The deepest part of the shrine is an attractive colonnaded area with a large but plain building. You can go out through a side door and around the back to admire the red gables and cypress roof of the shrine proper, which stands in yet another separate enclosure.

When you visit Omisihima, be sure to visit this impressive and historic shrine. 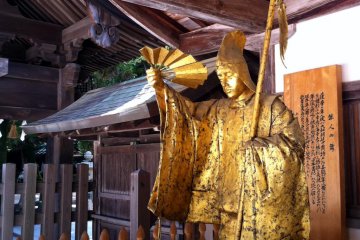 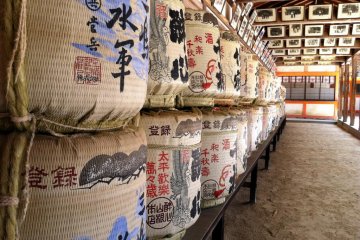 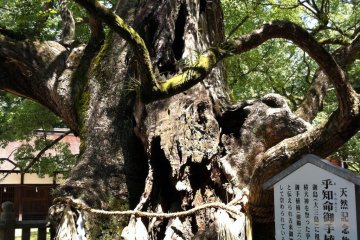 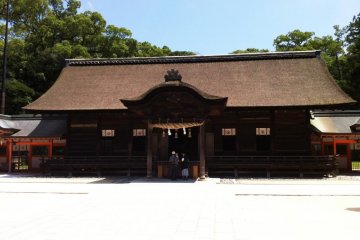 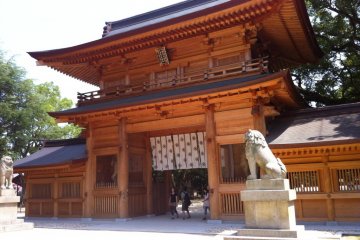