A riot of nature in central Imabari

It wasn’t my intention to visit Bekku Oyamazumi Shrine. I went into the center of Imabari to see the Buddhist temple, Nankobo. But as I was going around the sandy precincts of Nankobo, my eye was constantly drawn to the exuberant greenery next door. When I’d seen everything at Nankobo, I slid next door. What a contrast it was.

At Nankobo, pilgrims were chanting sutras to the beat of two wooden blocks knocked together with a high-pitched chink-chink-chink-chink sound. As I drew away from the temple and approached the main hall of the shrine, the sound segued into a low drum beat that went through a number of subtle changes. Peering through the open porch of the shrine, I saw a family seated on stools as the elderly priest beat his drum in the mid-section of the shrine.

Bekku Oyamazumi Shrine is divided into three parts, each in a different style. The public part of the shrine is wide cross-ways with a sweeping roof of cedar bark. This natural material attracts moss and presents a very mellow, rustic appearance, like an old barn. The narrow waist of the shrine is roofed in grey tiles, while the back part where the kami or deity resides has a green copper roof with extended gables. It’s unusual to find a shrine with all these elements together. Bekku means "associated shrine", and this shrine is associated with the spectacular Oyamazumi Shrine on Omishima Island.

To the side of this main building is another smaller shrine in striking red and green. Equally striking is the stone mushroom next to it, enclosed in a straw rope and shide paper streamers. Next to this shrine is another red beauty, a shrine to the white fox god, Inari, who you can see above the porch. A ‘tunnel’ of red torii gates leads up to the shrine. Through these gates, you can get an interesting view of the Daishi-do in the temple next door.

I was enchanted by the beauty and character of the trees in Bekku Oyamazumi Shrine. Despite the cold of early spring, the evergreen trees were extremely verdant, with moss and other clinging greenery coating everything, including the top of a little stone torii. The old trees are holed and split in interesting patterns. When I visited in mid-March, the cherry blossoms were coming into bloom, presenting their delicate pink flowers against the dark wood of an old shrine close to the main road through Imabari. 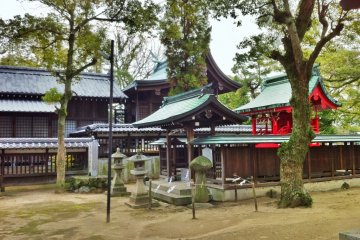 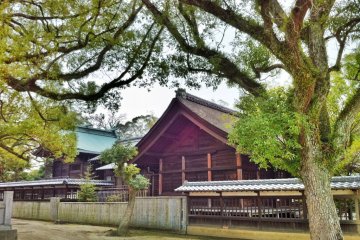 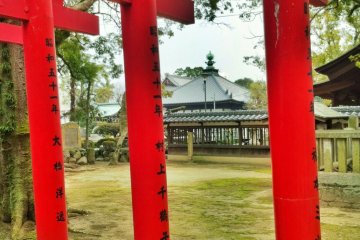 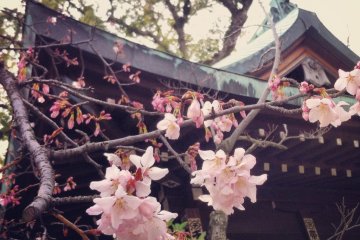 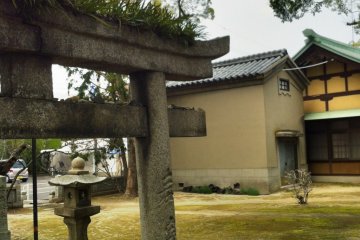