Southeast of Tobe, just outside Matsuyama, the road climbs steeply up into the mountains. As you ascend through a series of hairpin turns and loops, you glimpse vistas of pine and deciduous forest, interspersed with valleys of stepped rice paddies, each extending for several miles. This is the road to Kuma Kogen, a highland area of mountains and farmland covering nearly six hundred square kilometers. Here, at a higher altitude, the seasons move at a different pace from the lower areas of Ehime, so if you want to experience autumn or winter earlier, just go to Kuma.

I visited Kuma Kogen Furusato Ryoko Mura (Kuma highland country travel village) in late November when the maple leaves were at their finest red. The weather was still warm in the daytime, but the cold nights had turned the leaves a fantastic color. I went to the Furusato Ryoko Mura to try the oven-baked pizza experience using all organic ingredients. This is run by a charming and energetic lady in her 70s or so. Ogawa-san, who speaks pretty good English, explained that she grows the wheat organically for baking the pizza herself. The other ingredients are all also produced organically. Having grown a good deal of vegetables myself without using chemical fertilizers or pesticides, I can tell you that organically produced food doesn’t necessarily taste better than non-organic. However, the ingredients available at Kuma have obviously been grown with more skill than I bring to the task, and they were all excellent, especially the tomatoes which were very sweet. You make the pizzas from scratch, including kneading the dough, but the process isn’t laborious at all. Eating the finished pizza looking out over a mountainside, with the sun filtering through red maple leaves, is an experience to be savored.

The main feature of the Kuma Kogen Furusato Ryoko Mura is its antique farm buildings, brought to the site from nearby mountains and carefully reconstructed. One of the buildings is now a café, called Wagura Ichijo-an, run by Wada-san, who speaks good English. He took me round the large thatched building, showing me the stables, a Meiji-era fire-fighting pump cart, and some paintings by a local artist. The interior of the café has an atmosphere unlike any I’ve experienced anywhere, with the inside of the thatched roof, bound intricately with straw ropes, rising above smoke-darkened roof beams. The café is in what was once the earthen floored kitchen, which adjoins the living area with its expanse of tatami mats and rustic open hearth. The café serves a variety of drinks and delicious sweets, and food will be offered from next year.

The Furusato Ryoko Mura also has cabins for short stays, and an observatory which makes effective use of the remoteness and clear air of Kuma Kogen. 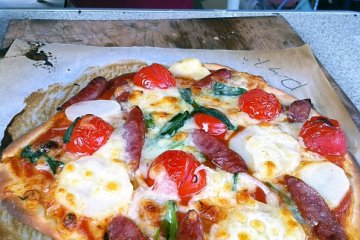 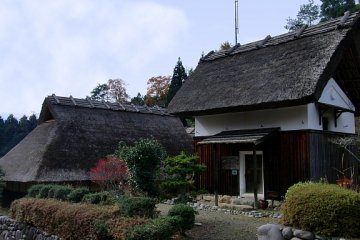 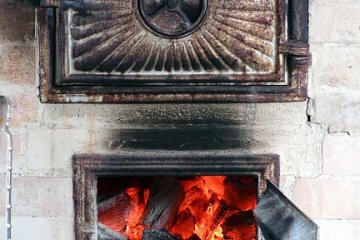