As you take the main route up Katsuyamamachi between Matsuyama Station and Dogo, the vivid red of a large torii gate and a mass of dark green foliage is sure to catch your eye. But unless you alight from your tram, or get out of your car, or go and lean your bicycle against its wall, you’re likely to miss the Rokkakudo, one of Matsuyama’s oddest shrines. You could almost say that it’s hiding in plain view.

Rokkakudo refers to one of the shrine buildings, a pretty hexagonal structure. If you approach the Rokkakudo from the main entrance, you may not even notice that it’s many sided, but if you stroll along the little road to the south of the shrine precinct, you can get a better view of its geometry.

In common with Shinto shrines everywhere, the Rokkakudo is a small haven of greenery and nature. Apart from the big tree in front of the shrine, there are pretty ferns, yew trees, a persimmon and subtropical plants to be found here. These are home to a variety of insects. When I went, the husks of cicada larvae were still clinging to the pillars of the shrine where their owners left them. Wherever I looked, there were little beetles going about their business.

This shrine belongs to Inari, the fox god, and there are statues of foxes everywhere. These have a good deal of the wolf about them, and they give the already mysterious shrine a slightly sinister aspect. Little foxes sit staring down from the roof of one of the buildings so that the visitor begins to feel that they’re being watched. The shrine is also associated with tanuki, a badger-like creature that appears in many strange old tales, frequently disguised or transmogrified in human form. A number of more or less grotesque tanuki statues grace the shrine. One of them is un-missably large. As are his testicles.

The area covered by the shrine is very small, but there’s a great deal of interest packed into this little complex. There’s much to delight the heart of lovers of the weird, and much of it is also very photogenic.

A festival is held at the Rokkakudo on the fourth Sunday of March to burn votive offerings. Warrior priests with tanuki skin skirts perform rather bizarre rites under the serious gaze of believers.

The shrine is within walking distance of Matsuyama castle and Dogo, and it’s worth a little stop if you’re passing. 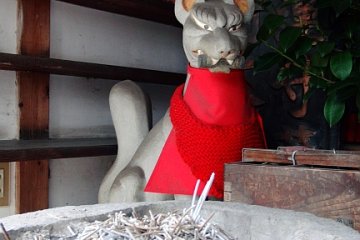 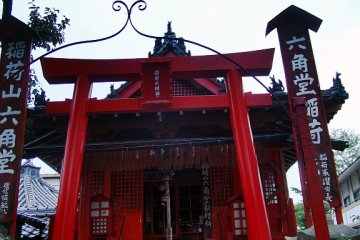 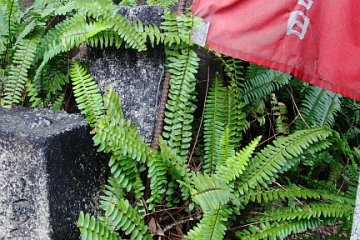 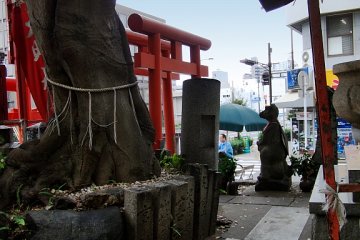 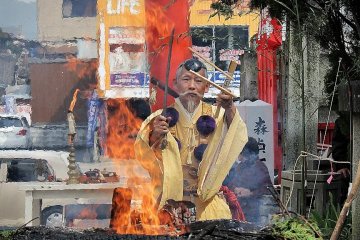