Did you know each Japanese prefecture has its symbol fish? Ehime’s symbol fish is sea bream. In the Kanto region around Tokyo, sea bream is expensive, but in Ehime you can enjoy it without spending too much money. Visitors from Kanto are always happy that they can eat fresh sea bream here at a reasonable price.

In Ehime, we have a unique dish using sea bream. It’s called taimeshi. Simply translated, taimeshi is “sea bream rice”, but the way it’s cooked and the way it developed is quite different in the different areas of Ehime. In short, we have two different types of local dishes with the same name.

Taimeshi from Matsuyama, in the middle part of Ehime, is a symbol of celebration. Sea bream is believed to bring good luck because its name tai sounds like medetai — “congratulations”. Sea bream served as sashimi, with its head and tail elaborately arranged as if the fish were alive, makes a gorgeous impression. This is only served when celebrating a special occasion.

In the middle part of Ehime, they cook rice and sea bream flavored with salt or sometimes soy sauce. It’s said that in the old days, people cooked whole sea bream with seawater. Taimeshi from the southern part of Ehime is also sea bream with rice, but the difference is that they use raw sea bream. It’s called nanyo taimeshi (southern) or Uwajima taimeshi after the city of Uwajima in southern Ehime. They make a sauce which is basically raw egg mixed with soy sauce. The raw sea bream is placed on hot rice and the sauce is poured over it. Unlike taimeshi in Matsuyama it’s not for celebration. It was developed as a quick and easy dish to make at home. Getting fresh sea bream was easy, so they made taimeshi as a way to eat up the leftover fish easily and quickly. Nevertheless, it’s still a delicious way to serve it.

Taimeshi with raw sea bream is not eaten in other areas of Japan. There are some other areas where people eat cooked taimeshi, but raw taimeshi is unique to Ehime. It’s said that the southern taimeshi is raw because people had to make the dish without using fire so as to avoid being detected by pirates. And it’s also said that pirates favored it because it was easy to make aboard a ship. We don’t know exactly who invented it, but it’s clear that southern taimeshi was a form of fast food.

In Matsuyama, the biggest city of Ehime, a lot of restaurants serve Uwajima taimeshi, so you can try it without going to Uwajima. Of course, there are many restaurants that serve cooked taimeshi too.

Here are some recommended restaurants; 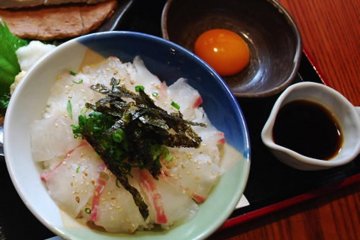 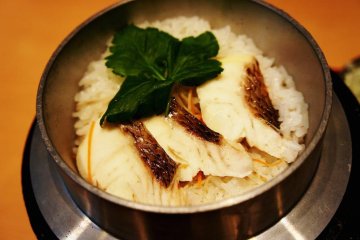 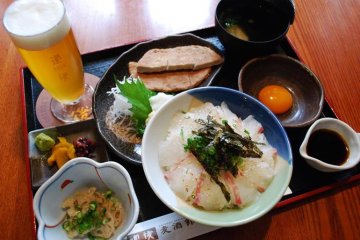