During the Russo-Japanese War from 1904 to 1905, the Japanese government set up twenty-nine camps nationwide for Russian prisoners of war, and the first was established in Matsuyama. There were more than 4,000 prisoners in Matsuyama at times, but ninety-eight of them died, from injuries or illness, including those that died on ships on their way to Matsuyama. Those that died were buried on a hillside overlooking Matsuyama castle, and their graves can still be seen today.

Unlike prisoners in WWII, the Russians seem to have been treated well and enjoyed a good deal of freedom. Contemporary photos show them enjoying bicycle races in Dogo Park, and at least one is known to have had a relationship with a Japanese woman, a nurse in the prisoners’ camp. A Russian coin, found in a well near the site of the camp, is roughly carved with her name. This is now on display in the Saka no Ue no Kumo Museum.

The cemetery itself is a very small area, and the headstones are also small. Each grave is marked with the name of the soldier in Russian and Japanese, and considerable care has been taken to identify their religion too. There are three-bar crosses for members of the Russian Orthodox church, conventional crosses for Catholics, and the Star of David for Jews, of whom there seem to have been quite a few. The local community and students of nearby Matsuyama University care for the graves, and there are always fresh flowers there.

Besides the Russians, there’s somebody called Arthur Lauenstein. But even in death, the poor chap is subject to the Japanese inability to use alphabet correctly – his surname has been roughly cut in two to fit on the narrow memorial. There’s also a stone commemorating two unknown American pilots who were unlucky enough to crash in Matsuyama six days before Japan surrendered.

If you’ve never visited a Japanese graveyard before, this is a good place to start. Graveyards for foreigners are a rarity in themselves, but there are other important Japanese personages buried here including Aochi Rinso, a doctor and Japan’s first physicist who died in 1833, and Adachi Shigenobu who established Matsuyama as a city, dying in 1625. The whole hillside is pretty much given over to graveyards and temples, and there are a great variety of styles of memorial and graves to be seen here. Tall stones that come to a central point, with points at the corners indicate soldiers who died in WWII, and there are lots of them to be seen.

The Russian Soldiers’ Cemetery is part of the Iyo Yama no Be no Michi, one of the 500 most beautiful walks in Japan. It’s also part of the Saka no Ue no Kumo historical course. 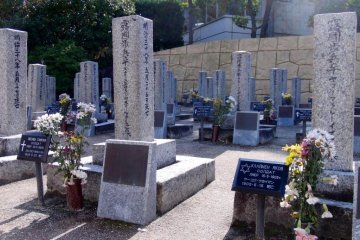 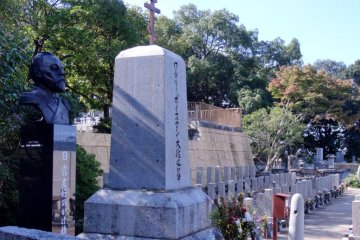 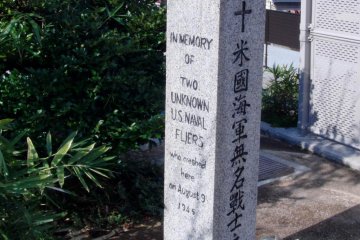 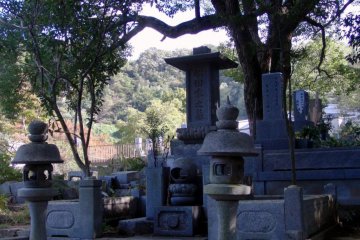