On a beautiful sunny day when the first chills of autumn were turning the leaves yellow, I visited a couple of the little poet’s hermitages of which there are several in Matsuyama. First I went to Issō-an, home of the free-form haiku poet Taneda Santōka who lived until 1940, then going back in time as it were, I walked around to the other side of Matsuyama castle to Kōshin-an, built by Kurita Chodō who lived until 1814.

Taneda Santōka led a troubled life after the suicide of his mother when he was eleven. Ordained as a Zen priest, he wandered around Japan on foot, begging alms. He completed the pilgrimage of 88 temples around Shikoku among other journeys. Finally he settled in Matsuyama, spending his last days at Isso-an, a tiny one-story house which survives in its original form.

Isso-an stands on a hillside dotted with Buddhist temples and cemeteries, on the route of the Iyo Yama no Be no Michi, selected as one of Japan’s 500 most beautiful walks. It’s a scenic spot with a little garden of its own, planted with trees that reflect the changing seasons. When I visited, the persimmon tree was bare of leaves, although some of the ripe orange fruit remained on the branches. Other trees were turning a brilliant yellow. The front of the house was adorned with drying persimmon and little baskets made of fluffy autumn grasses. One of the staff there told me that children used to enjoy making these things in the days before computer games.

While the garden is open all the time, the house itself is open only on weekends and holidays. The interior is simple, with a Buddhist shrine in an alcove decorated with a wicker hat of the type that Santoka wore. There are cushions on the floor and the two staff manning the Isso-an invited me to sit and enjoy the view of the garden while they served me a very welcome cup of green tea, and pointed out that this and that detail. I spent a very pleasant 40 minutes or so, learning about Santoka from the staff and the little photographic exhibits in the adjacent mini-museum (with well-appointed toilets). Isso-an can be combined with visits to the nearby Russian Soliders’ Cemetery and Gokoku Shrine.

Events are held at the Isso-an, including poetry meetings, small concerts and tea ceremonies. 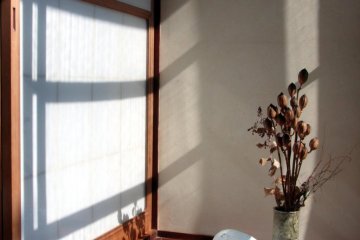 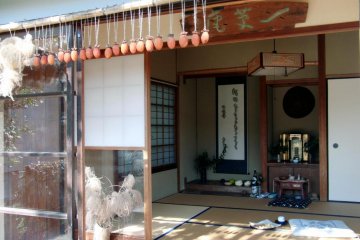 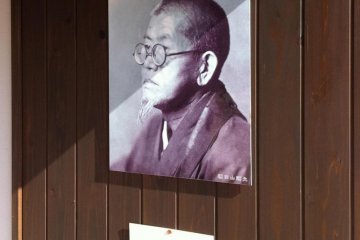 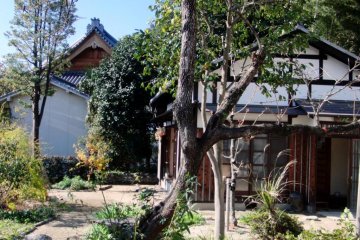 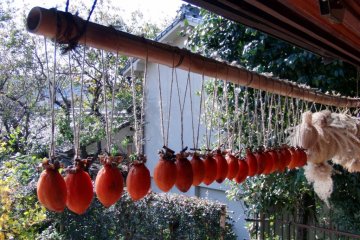