Matsuyama enjoys the rare distinction for a Japanese city of having three universities all within a square mile — Matsuyama University, Ehime University, and Chomie’s Manga Shokudo. Well, OK, Chomie’s isn’t actually a university, but it might as well be — a university for studying comic books. It’s actually a self-service restaurant, but with a vast library of manga comics. It’s conveniently located just across the road from Ehime University, not far from Gokoku Shrine.

The banner across the front of the restaurant boasts 40 thousand titles, which is a lot. When you enter, you’re confronted with a space that looks just like a library, with bookshelves lining every wall, and a row in the middle for good measure. The shelves are packed with every comic-lover’s dream — full volume sets of every sort of series from the last twenty years or more.

I should probably confess to being largely immune to the appeal of Japanese comics. Personally I like to read real books. But there is something impressive and inviting about such a large collection. It should be noted that all of the comics are in Japanese. There are comics for every conceivable reading segment

As you head further into the restaurant, you suddenly realize that there’s another section off to the right, with two more large rooms, both lined with comics. This is the smoking section, which does have that distinct smell about it. The main room fortunately is non-smoking.

To order, you select from the menu, also in Japanese, and tell the friendly ladies at the counter what you want. You’re then given a beeper which beeps really loudly and persistently when your order is ready, presumably to help you separate yourself from your favourite comic. When I went to get my meal, the lady solicitously asked me if I could manage with chopsticks.

The menu has the typical shokudo offerings of a set meal or two, and other options such as curry and rice, omrice, katusdon, fried noodles and so on. I chose the set lunch which comprised chicken and sweet potato stir fried in a soy and buttery tasting sauce, clear soup containing wakame seaweed, and vinegared cucumber slices with more seaweed. The food was good, with plenty of vegetables. This cost a very reasonable 580 yen, which covers 90 minutes of reading. The time of your last minute is marked on your bill, and you’ll be charged 100 yen for every 30 minutes thereafter.

If you can read Japanese and you like manga, you’ll be in heaven at Chomie’s. But even if you can’t and don’t, it’s still a good option for a cheap lunch or dinner in the university district, and it is an authentic Japanese experience. 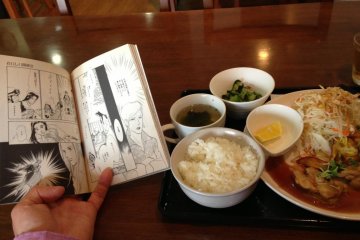 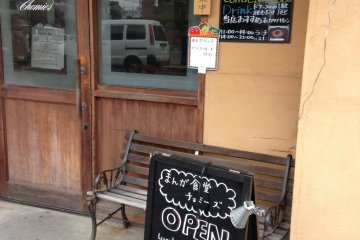 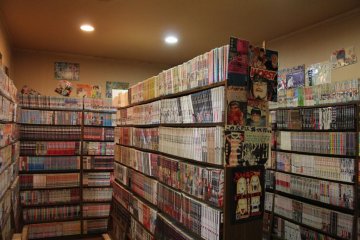 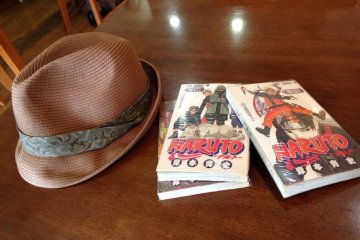