To most Japanese people, Tobe calls to mind Tobe-yaki, a type of ceramic known throughout Japan. People tend to imagine it as a picturesque, arty sort of town, visibly full of potter’s ateliers, known as kama meaning ‘kiln’. Actually, it’s a nondescript place, a suburb of Matsuyama strung out along an uninteresting stretch of road. Nevertheless, there are plenty of things to see and do in Tobe, making it worth a visit, especially if you like looking at beautiful ceramics or you’re in need of some plates.

A Japanese friend Tsutae, who is learning to be potter in Tobe, a town just south of Matsuyama, invited me to join him for the Tobe Autumn Festival. This event is spread over two locations, with stalls and a flea market around the Town Hall, and another market in the little plaza around the Tobe Pottery Traditional Industry Hall. Both locations have pavilions selling a harmonious combination of pottery and food, including various types of the Ehime favorite, jakoten, a deep-fried patty of minced fish. Overwhelmed by the aroma from the food stalls, I quickly bought myself a softball sized lump of this delicacy, stuffed with peas and sweet corn which went by the name Dossun! (Crash-bang!). My friend stood by patiently as I munched it down.

We spent a good deal of time browsing the ceramics stalls, without any particular intention to buy. Tsutae introduced me to his fellow student of pottery, Satoshi Sasaki, who was manning a stall. A part-time Buddhist priest, he divides his time between the kiln and the temple, producing some very elegant and delicate works. Meanwhile, a very proficient amateur jazz orchestra, squeezed into a tiny stage, was knocking out polished variations on popular hits. I recognized a few theme tunes from the Studio Ghibli hit animations. Other attractions on the stage included Okinawan and Japanese drumming.

Round the corner from the Industry Hall is the Hatsuyukihai sake brewery where many festival-goers were busily sipping this and that marque in search of the one that they would take home. I found a full-bodied and scented junmai very much to my liking.

Perhaps the most interesting part of the festival is the opening of the Tobe Mukashi no Kurashikan, a collection of brick-a-brac gathered over the past century by the wife of a local doctor. The collection is packed into a sprawling old house with a different theme for each room – dolls, agriculture equipment, pop culture, pottery and so on. There’s enough in here to fill a museum six times the size. A very gracious local lady took us around, explaining the use of many unfamiliar articles from the last century, including a Sputnik-like device that turned out to be a hand-turned washing machine. The house is opened only twice a year, so the festival is a good opportunity to visit, although you can call (089) 962-2428 to make an appointment at other times too. 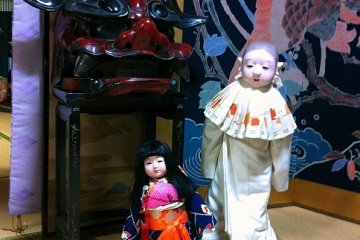 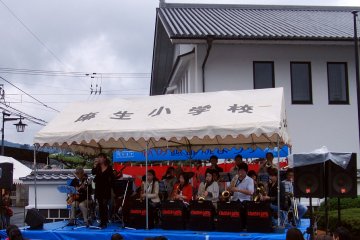 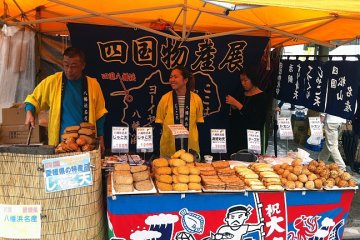 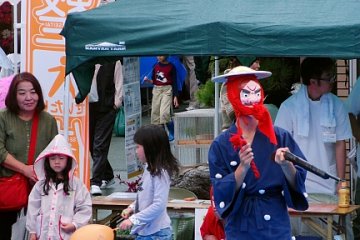