A region of cultural and natural wonders

Kyushu, an often forgotten area of Japan or visitors, holds so many exceptional places of natural and cultural significance. Let’s explore them here:

The Shimazu clan of the Satsuma domain (now Kagoshima) was one of the most influential families in the region, bringing in art and technology from both abroad and other areas of Japan. One craft encompassing both of these elements was Satsuma Kiriko — a type of colored cut crystal glass. Glass cutting techniques imported from Edo (now Tokyo) and coloring techniques from China were combined to make a new kind of glassware. Sadly, due to a number of historical factors, this know-how was lost for over a century. It was only resurrected in 1985 thanks to the patience and hard work of a group of dedicated craftsmen at Shimazu Limited. Now, only a handful of places in Japan make this elegant glassware: Shimadzu (belonging to the descendants of the Shimazu clan) in Kagoshima City and Satsuma Vidro Arts & Crafts in Satsuma Town.

Food tip: Tonkatsu – fried pork cutlet – is a local soul food. Kagoshima is famous for black pork and this is one of the best ways to sample it.

Bonus Highlight: Visit Sengan-en, a stately home, and garden still owned by the Shimazu family. Here you’ll find a fantastic view of the volcanic mountain Sakurajima and expansive gardens, which include a cat shrine and hiking trail.

Miyazaki — The Spiritual Place and of Birth of Japan

Takachiho is a spiritual place, considered to be the birthplace of Japan as a nation, as it was here, according to local myth, the Japanese gods first descended upon Earth. Kushifuru Shrine is built on the very spot this supposedly happened. The Takachiho Shrine nearby is also enshrouded in mystery, hidden away in a dense group of trees. However, it is at night that this place truly comes to life. It is here the Kagura dance, a dance dedicated to the gods, is performed every night from 8pm. This nightly performance is a condensed version of the original, only featuring four of the traditional 33 acts during festivals. Each dance tells the story of a myth related to the gods, with the final one being a comedic one, starring two drunk gods — and a few surprises for the audience.

Food Tip: Miyazaki is famous for a dish called Chicken Nanban, a delectably tender fried chicken dish that’s tender and comes with a vinegar-based sauce that makes it feel light. There is a version with tartar sauce, but try the vinegar one – it’s the original.

Bonus Highlight: Takachiho Gorge is a narrow chasm, formed by the massive eruptions of Mount Aso in ancient times. Visitors can easily see how the volcanic lava formed the structure of the rock.

Kumamoto Castle dates back to 1467 and many of the original buildings inside the castle complex remain. However, in April 2016, a combination of two large earthquakes hit Kumamoto City and some parts of the castle buildings were destroyed. Since then, the city has worked to restore it to its former glory. The external work will be completed by autumn of 2020, but coupled with the reconstruction of the interiors, restoring the whole complex will take 20 years to complete.

The restoration work is fascinating, as they are piecing the castle together so every rock is in the exact same place as before. Being able to witness the engineering skill required to restore the city’s symbol firsthand is a once in a lifetime opportunity. Volunteer groups are available to give guided tours explaining not just the history of the castle, but also updates on how the reconstruction progress is going.

Food tip: Not for the faint of heart, basashi is one of Kumamoto’s most famous dishes. (That’s horse sashimi to the rest of us.)

Bonus Highlight: Count how many Kumamon you can find as you travel – this popular mascot can be found almost everywhere!

Oita — Streets of Samurai Past

Kitsuki city well preserved city of samurai houses with many architectural quirks. Visitors are invited to rent kimono during their exploration, as not only will it create a photogenic atmosphere with the old houses as a backdrop, it also gives kimono wearers free entry to many of the museum and samurai homes. The nearby main commercial street has many cute gift shops and cafes, all located in traditional merchant houses and shops. Savvy travelers will notice that Kitsuki has made great efforts to keep unsightly power lines away from these beautiful traditional districts and maintain the area’s beauty.

Kitsuki Castle, one of the main sightseeing spots, is a replica, may not be that interesting on its own, but the castle grounds have beautiful sakura trees that blossom in spring, and the castle commands an amazing view. The original castle was virtually impenetrable as it had the ocean to the east and two rivers to the north and south. On a clear day you can see all the way to Ehime prefecture on Shikoku Island in the east!

Food Tip: Chicken tempura, known as toriten, is a must. It’s juicy and crispy, and totally different from fried chicken.

Bonus Highlight: Stop by in May, when they have the Kitsuki Castle Festival, the biggest festival of the year. It features traditional dances, as well as a nighttime Samurai procession.

The Kujukushima (literally 99 islands) off of the Nagasaki coastline is picture perfect, offering stunning views of scattered islands on an ocean backdrop. There are several observation decks across the coastline, some of which offer not the gorgeous island view on one side, and the city lights of Sasebo’s industrial area on the other. The name of this collection of islands is a little misleading — although the name implies 99 islands, there are actually over 200! In the past, people understood there were a lot, but didn’t have the means to count every single one of them. The number 99 implies many of something and so it stuck.

In Nagasaki City, the Glover Garden is a testament to the area’s international past. In this open-air museum, you can explore old Western-style buildings related to Thomas Blake Glover, a Scottish merchant who contributed to the region’s industry.

Food tip: Sasebo is famous for Sasebo Burgers – it doesn’t sound very Japanese, but this is where burgers were first adopted in Japan, and they are pretty amazing.

Bonus Highlight: Head to Dejima, which used to be a Dutch trading port. It’s now filled with stylish shops and cool cafés.

Arita city is home to Arita yaki, a type of porcelain that has existed for over 400 years. It was a Korean potter, named Ri-Sanpei, who initially discovered rock deposits suitable for porcelain making in the area. Thanks to his efforts, Arita flourished. The signs of the city’s former prosperity are abound when you walk around town — it’s almost like looking for Easter eggs. Look closely at what would normally be indistinctive elsewhere — storefronts, bus stops, street signs, the torii gates at Tozan Shrine — you may be surprised at what you discover. For a more tangible sort of treasure hunting, head to Kouraku Kiln for a real bargain. Here you’ll find a whole warehouse full of beautiful pottery up for grabs. For just a fee of JPY 5,000 (or JPY 10,000 in the more exclusive section), you can fill a whole shopping basket with any kind of porcelain ware you like — and that can fit.

Food Tip: Drop by for lunch and a coffee at Gallery Arita, a charming eatery where you can test out Arita yaki firsthand. Food is served on Arita-made plates and you can choose your own cup to drink from hundreds of cups on sale.

Bonus Highlight: The Arita Toukiichi (Arita porcelain market) is held every year from the end of April to the beginning of May.

Yanagawa City is an old castle town with beautiful vistas of old Edo-style buildings and beautiful waterfronts. Visitors should take a riverboat cruise to get the best view of the area — and a free serenade of traditional song is included! Marvel at how houses along the waterfront seem to sit atop the water, with boats tied up outside waiting for their owners to take them out for a spin.

The northern Fukuoka area, known as Kitakyushu, is home to Hiraodai Coutryside Park, which is a huge natural park with limestone caves — several of them several kilometers long. Visitors can walk down parts of these caves, some of which have revealed fossil treasures of the Naumann elephant and other rare specimens.

Food tip: Those who are brave enough should try fugu – yes, the poisonous blowfish – as the area is famous for it. If that’s not your style, try baked curry – a delicious creation with melted cheese and egg.

Bonus Highlight: Take the monorail from Kokura station to Tanga station for a taste of a real retro shopping mall that remains virtually unchanged since the 1950s.

For more information on how to get to Kyushu and travel around once you get here, see this. 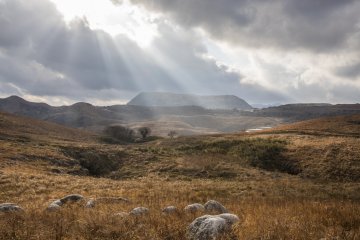 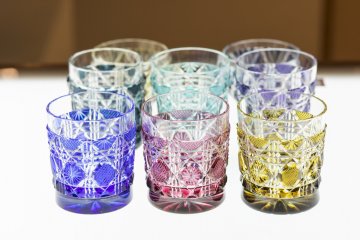 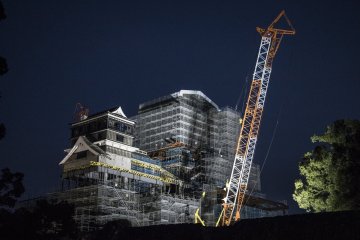 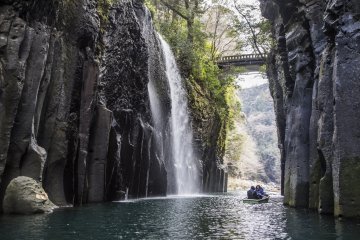 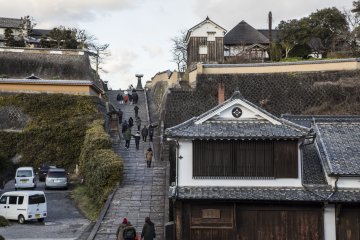 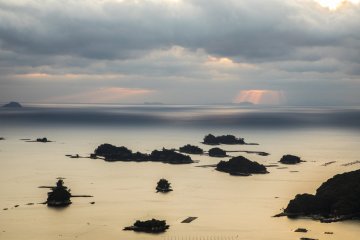 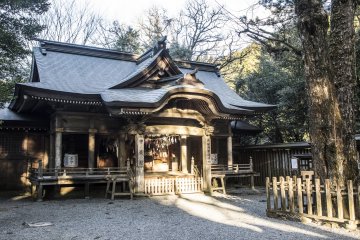 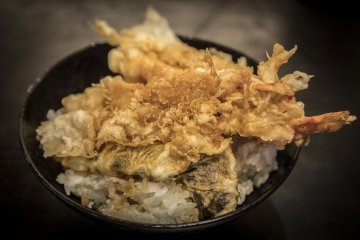 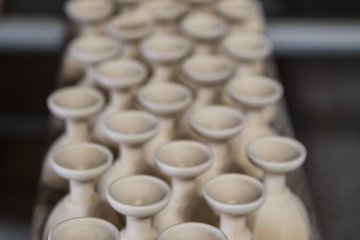 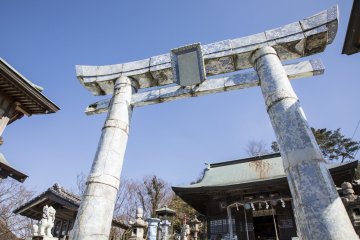 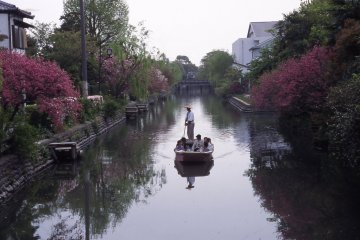