One Day in Kitakyushu

Along the Kanmon Strait at the closest point on Kyushu to Japan’s main island of Honshu, Kitakyushu became a major power in the late 19th century as the nation industrialized. It has remained a special attraction in western Japan ever since. Historic sites as well as sculpted and natural beauty prevail, day or night, in this city of around a million people. How much of it can you experience in one day? Take your pick from the top ten attractions.

Most travelers first arrive at Kokura Station, with its Shinkansen, Japan Rail, and city monorail lines, or nearby urban expressway ramp. This area is packed with restaurants, standing bars, bakeries, and shops to explore. Walk just a bit further and find the castle, an old-style market, and an immaculate toilet museum.

Before the formation of the city of Kitakyushu, the area’s strategic heart was Kokura, where the Murasaki River flows down from the mountains, through a wide floodplain, and into the waters near the Kanmon Strait.

Kokura Castle adds historic beauty and brings the distant past into the present in this modern metropolis. Next to a large shopping mall, the restored castle holds an eye-catching museum with details on Japan’s most famous swordsman, Miyamoto Musashi, and excellent views of the moat and grounds from the top of the keep. There are beautiful areas for walks and picnics, plus there’s the Kokura Castle Japanese Garden with a samurai-style mansion where you can learn about the art of Japanese tea ceremony and even try some tea yourself.

Only a ten-minute walk from the castle, take a stroll through the century-old Tanga Market. You’ll see and hear the trade of fresh seafood and produce as well as a wide range of other products. Around the market are a number of restaurants and bars, including one of Kitakyushu’s distinctive kaku-uchi. Inside this particular kind of sake shop is a stand-up bar so you can enjoy your purchase right there. Individual shop times vary, but most of the stores open around 10 am.

Like every region of Japan, Kitakyushu boasts gourmet specialties. For lunch, try yaki curry, a curry dish sprinkled with cheese and baked to gooey perfection.

Also famous is Kokura beef. Only a very limited number of Japanese Black wagyu that are raised here have the fine marbling required to pass quality inspection and achieve the coveted label of “Kokura beef.” Grill your own at one of the city’s lively yakiniku restaurants.

Kitakyushu beautifully renovated their historic port district, now called Mojiko Retro. Start at the Neo-Renaissance Mojiko Station, one of the classiest in Japan, dating back over a hundred years and officially classified as one of Japan’s National Important Cultural Properties. From there, stroll through the vibrant streets of the old port, which helped thrust feudal Japan into the modern era by exporting the area’s coal and steel production.

Within walking distance of the station, find several museums and other historic buildings, restaurants, cafés, Kaikyo Plaza Shopping Center, a harbor, ferry rides, an observation deck at the top of Mojiko Retro Highmart, a cool pedestrian drawbridge, a souvenir marketplace, and even a microbrewery.

While in Mojiko, visit the Kyushu Railway History Museum, a major attraction that appeals to more than railway enthusiasts. Get up close to steam locomotives that are over a century old, peer inside, and take in the smell of oil on steel. Explore a dozen historic engines, cars, and cabs. Even climb in, sit at the controls, and feel what it’d be like to drive one of these powerful machines. Then hop on board a mini-train and drive it around. That’s just outside the museum!

Inside, you can board a Meiji-period train car and see an assortment of historic rails, communication devices, refreshments, and other railway-related items. Hear the sounds of steam engine whistles and operate a small-scale train over bridges, through tunnels, and around a large diorama. There’s also a highly realistic train simulator in an actual cab, where you can drive a modern train yourself down the tracks for two stations. Of course, don’t leave without picking up something stylishly cute from the world of Japanese trains at the specialized gift shop.

Mojiko’s strategic location puts it along a narrow waterway that separates two of Japan’s four main islands, Kyushu and Honshu, and allows ships to pass from the Pacific Ocean and Inland Sea to the Sea of Japan. The Kanmon Bridge spans the strait and ocean liners frequently pass. Watch from Mekari Shrine or Mekari Park’s Observation Deck 2. There are also tunnels below the waterway, including one for pedestrians. The bridge is lit up beautifully at night.

Only half an hour by car or taxi from downtown is a rare karst landscape, one of three in Japan. Upon arrival at this fascinating geological park, rolling mountainsides invite you to hike through the grasses, wildflowers, boulders, and wooded areas. Open your ears and you’ll hear only birdsong, chirping insects, and the wind. The paths will take you past interesting dolines, large depressions characteristic of karst terrains, but some of the most beautiful scenery lies underground.

Limestone caves are another trait of karst landscapes and this area has a few you can explore. The premier example is Senbutsu Cave, with an icy-cold stream cutting through the caves. To go beyond the broad walkway of the entrance, trade your shoes for water slippers and explore upriver and marvel at the gorgeous rock formations.

If you’re here at the end of April or the beginning of May, the Kawachi Wisteria Garden is a must-see. Two extensive and sublime flower tunnels each approximately 100 meters long are the highlight of the vast gardens, bringing travelers from around Japan and the world.

It’s also worth visiting in November when the distinctively beautiful leaves of the 700 Japanese maple trees change color and create a vivid display of autumn delight.

Kitakyushu provides some of the best night views in all of Japan. Reach the top of Mt. Sarakura by cable car and slope car for the best of the best. This mountaintop oasis puts you in natural surroundings but with a view of Greater Kitakyushu. Arrive as the sun begins to set into the sea and the city lights turn on to illuminate the land like a scattering of gems. Wonder at the warm glow of the factories and the tiny lights of squid boats that appear one-by-one beyond the city for the spectacular day-to-night transition.

All ten locations are too much to visit in just one day. So which of these will you put on your list? It’s true that the past industrial boom of northern Kyushu helped build modern Japan and gave Kitakyushu its roots, but intelligent development has pushed the city to become an attractive place to visit with its own distinct feeling and landscape. Whether you are into nature, history, or entertainment, Kitakyushu makes it easy to connect, so live it up for a day here and explore to your heart’s content. 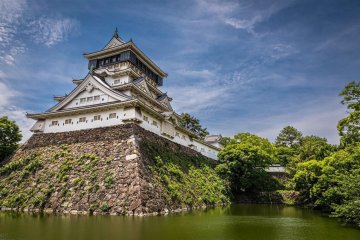 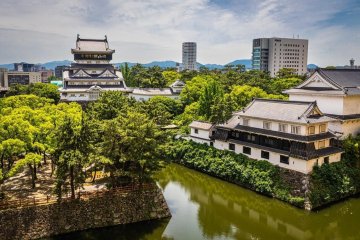 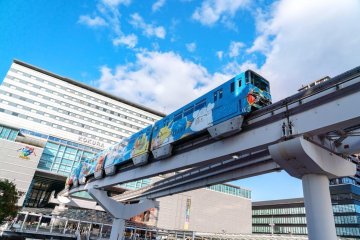 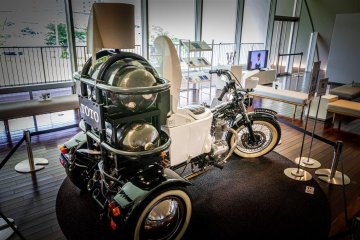 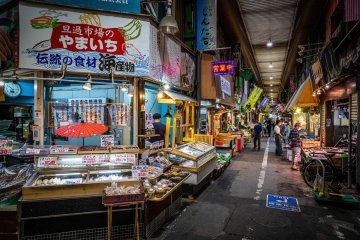 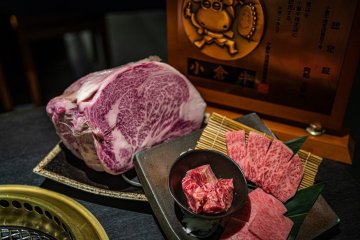 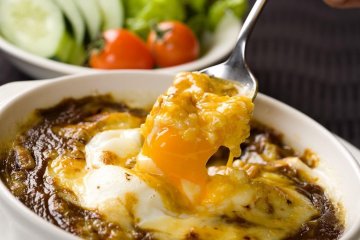 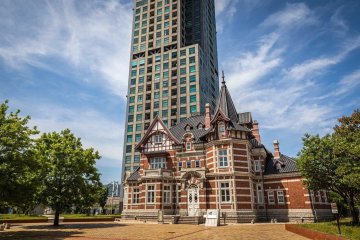 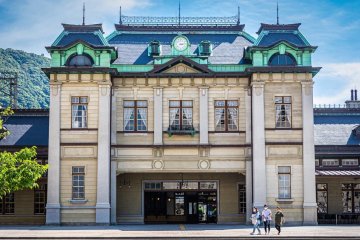 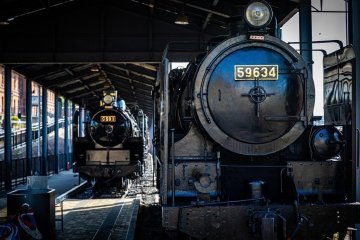 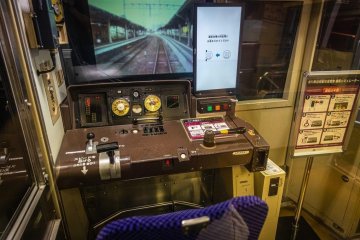 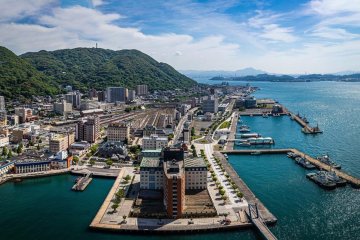 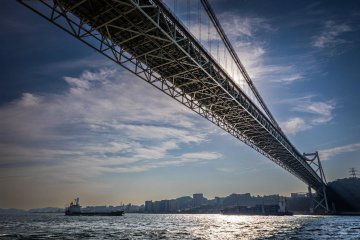 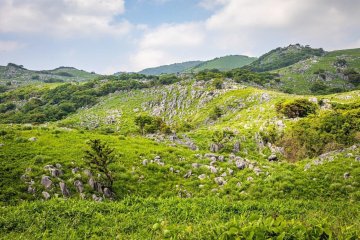 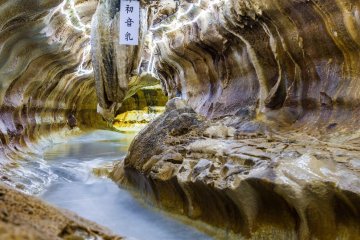 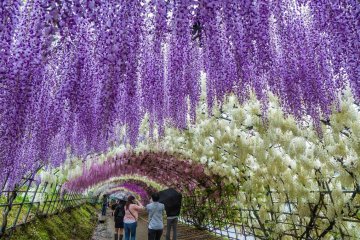 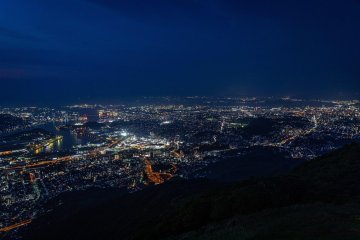