From coal mines to hot springs

In 1883, mining began in the Joban coal field of Iwaki City, Fukushima. The mine became Japan's largest in the 1940's, but by the early 60's, Japan's switch to oil spelled doom for the mine and its community. Yutaka Nakamura, vice president of the mine, came up with the idea of building a Hawaiian themed resort around the local hot springs. His dream became a reality and people who were once working in the mines, and/or their family members, 'switched' careers. 'Spa Resort Hawaiians' became one of Japan's most popular 'theme park' destinations.

During the Tohoku earthquakes in 2011, the resort sustained damage and was forced to close. The resort re-opened in February of 2012. At first, many tourists stayed away due to fears of radiation. Fortunately, the fears are unfounded and the resort's excellent reputation has enticed visitors to return, in fact, most are repeat customers. In addition to great service, a family-friendly atmosphere, and very reasonable prices; a popular draw is the resort's famous dance troupe, the 'Hula Girls'. This troupe of local young women perform every evening on a stage built within the water-park dome.

Spa Resort Hawaiians is actually divided into five sections. The Water Park is covered by a huge dome. The space inside is about six times larger than the Tokyo Dome. The temperature is set at 28 degrees Celsius so it can remain open year-round. There are giant water slides, a wave pool, a 'lazy river', a water play area for small children, a greenhouse, and more.

The Spring Park is considered the spa's 'European' zone and is also indoors. It is less of a play area, and more of a relaxation zone. There is also a traditional segregated 'naked' onsen in this area.

The Spa Garden Pareo is divided into red, blue, yellow and green sections and mainly consists of outdoor pools, jacuzzi baths and a sauna. This area is closed in winter.

VirPort contains one of the resort's hotels which is supposed to resemble the French Rivera. In addition to rooms, guests can participate in aqua exercise classes, hula lessons, and/or get a massage in this area.

Edo Jowa Yoichi is the final section of the resort. It is a traditional onsen with 'old Edo' as its theme. This area is also segregated and no bathing suits are allowed. It is listed in the Guinness Book of World Records as the largest outdoor onsen bath in the world.

The resort has a number of different types of accommodations, including rooms in the Hotel Hawaiians, VirPort, and the newer Monolith Tower. Rooms are quite spacious and there are many levels of accommodations for all budgets.

Before visiting, be sure to rent the movie 'Hula Girls' to learn the history behind the resort. And, while in the area, be sure to visit Aquamarine Fukushima, Misaki Park, Shiramizu Amida-do Temple, and the other sightseeing spots of Iwaki City. 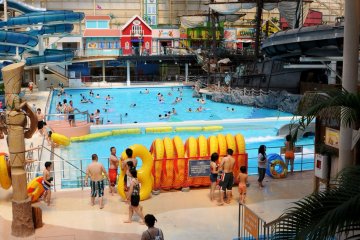 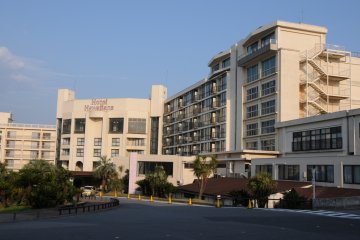 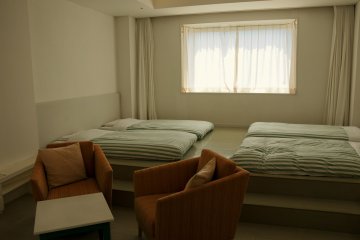